The critically acclaimed artist performs at the Tobin Center for the Performing Arts on Monday, Jan. 23. 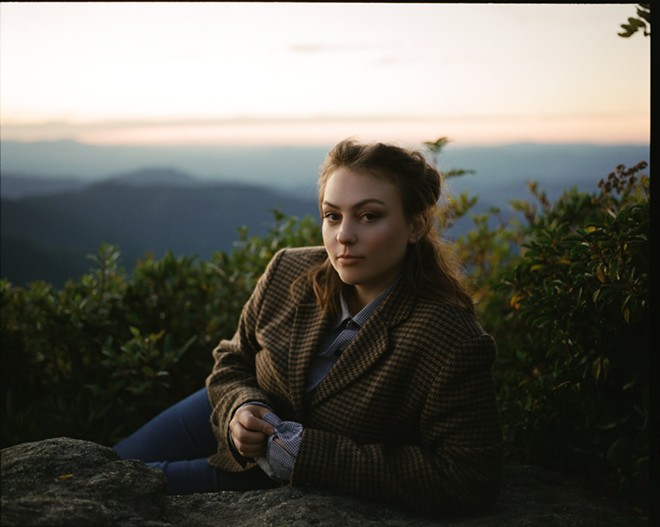 Courtesy Photo / Tobin Center for the Performing Arts
Angel Olsen's latest album is a powerful collection of country-tinged songs that chronicle that period of grief and heartbreak along with the exhilaration of finding new love.
Change is constant for singer-songwriter Angel Olsen, both in music and life.

Olsen, who performs Monday, Jan. 23 at the Tobin Center for the Performing Arts, has repeatedly retooled her sound over a career that includes the critically acclaimed albums My Woman (2016), All Mirrors (2019) and Big Time (2022).

Over time, the performer has broadened her moody indie rock to include anything from orchestral flourishes to synths. Big Time, her latest release, includes a significant dose of American and roots styles.

The run-up to Big Time also included personal realizations and events that — quite naturally, given her emotional songwriting style — are reflected in the music. She embraced her self-described “queer” identity after being involved in her first same-sex relationship, and she’s currently in a relationship with Beau, a non-binary trans person. The album was ultimately accompanied by a 27-minute short film that delved into her experiences.

Along the way, Olsen also came out to her parents, who both died shortly after, mere weeks apart.

The singer-songwriter talked to the Current via a phone call from her home in Asheville, N.C. She was more open and casual than many performers of her stature, even delving into the details of preparing for her pending tour: “I make sure I have a specific pillow. The bus is not the most comfortable sleep.”

Have you played in San Antonio before?

I’m not sure that I have. I was trying to look at that just the other day. I did play McAllen, Texas, in 2014.

That isn’t someplace I expected to hear that you played. What was that like?

We were like the Beatles! It was an all-ages show and people were screaming the lyrics. I was like, “This is so cool.” I need to go to Mexico and spend more time on the border. It was at Cine El Rey. Nov. 6. I remember it because it was early on. We were staying at some random hotel and everyone smoked weed on the outside, on the patio. The guy that was running the desk was like 18 years old. He came up and knocked on our door. We were all hanging out in the same room, talking, whatever. I remember him trying to make his voice sound low and he was like, “Gentlemen, the stench.” We lost it when he said that, for whatever reason.

I have a theory.

It was just so funny. He didn’t tell us to do anything about it. He just knew we were up to no good. We didn’t know what to do with that. He just stood there. That was a time when I did smoke weed all the time. I can’t do it anymore because I just get a panic attack immediately.

That was a smaller show in McAllen. You’ve talked about growing up and enjoying basement punk shows. That might surprise some people who only know your albums. How did those formative experiences get you to where you are now?

I think that playing DIY shows in Chicago was kind of how I grew as a musician. Singing with [eclectic indie legend] Bonnie “Prince” Billy, we always played smaller clubs, and I admired that. We would choose to do a couple nights somewhere, small club. We played in Europe. We played a tiny, shitty club in Warsaw, and it was so much fun. You don’t get the same quality of stage space. It was so stressful for people needing to get guitars and switch out stuff. The sound is always different. But the energy of smaller shows is way more fun. Whenever I can do something and make it work, I’m stoked. You can connect with people more, you know? I used to hate theater shows because everyone is sitting down and it’s so quiet. You can’t tell if they’re into it. I’ve gotten used to it now, but it was hard for me to make the switch when we went to bigger places. Now we find a way to wake them up.

Your career has had a number of stylistic shifts. If someone listens to your albums back-to-back, they aren’t going to hear a lot of overlap. Where would you tell a new listener to start with your music?

You’ve talked a lot about Big Time being influenced by the passing of your parents, just prior to the recording. The album has been out a while now, people have heard it. How has going through this artistic process helped you deal with grief?

I think I’m kind of crazy for sharing it with anybody. (Laughs.) I was really depressed, and I had written a lot of the songs before they passed away, so a lot of the material wasn’t about them. Maybe one song. There was a psychotic week, and I went to my mom’s funeral, and then a week later I went to New York for [my current partner] Beau’s birthday. They were just going and doing the thing people do on their birthday. And I was like, “Why did I fucking come here? I should’ve let you do this on your own.” I think after that I was ready to go back to work, in any sense. I was like, “Please put me to work. I feel useless.” I decided to go into the studio after all, and I think it was really helpful to be focusing on something. The film was a lot harder to make. She was taking so much of what was real in my life, and we were collaborating on it. I had to edit a lot, and in editing I had to remember things. It was intense. I probably won’t watch the film a lot, you know? But I’ve watched it. (Laughs.) It’s elegant and beautiful, but I learned I don’t want to be an actor.

Luckily, you have a fallback career.

Well, I really like having control over the final thing. Unless that’s a possibility, I don’t have any interest in it. I love film. When I was a kid, I thought I might do something in film one day, but music is what happened. I ended up loving to play music. I was one of those kids that would watch a movie and make the other family members re-enact it. I was obsessed with making little stories. It’s part of how I write music. That excitement around the story. I put it to music. I feel very happy with that. As a musician you get to perform, you get to act, you get to direct, you get to write. You choose when something changes. It feels more fluid to me. The truth is, I feel a lot better than when I recorded (Big Time). I feel back, you know? But grief isn’t a thing you can do all at once. It’s little moments throughout time. I have little moments where I’m like, “Oh yeah, I can’t talk to my mom about that thing.”

You talked to The New Yorker about your first same-sex relationship and said, “When I was dating people before, I felt I had to hide myself. In this relationship I was so real.” I think there’s a level of irony there, because your music is emotional and open. What’s that contradiction about, and was that life hard to live?

I think that’s where a lot of my angry songs came from (laughs). I didn’t feel like I had a space to say what I meant or to exist. I just didn’t know what was good for me yet. I kept pushing for relationships to work. Now I feel a little older and a little more honest with my boundaries. When your example of a good relationship is fighting all the time, you think “that means you’re passionate.” But it doesn’t have to be that way.

I saw a quote about concerts from Kim Gordon of Sonic Youth. She said “People pay money to see others believe in themselves.” That quote came to mind when watching you come onstage at the 2017 Pitchfork Music Festival, which is on YouTube. The band did an instrumental bit and you came onstage like you owned the world. How do you get into that confident frame of mind for a concert?

I was at such a crazy point in my life that I was almost manic. The confidence was, “Well, here goes nothing.” There were so many festivals that summer that I was losing my fucking mind. I was switching management. And there was no green room at that show! For whatever reason they forgot. So the only place to hide was the bathroom. Maybe there was one green room, but anyone could go in it. My publisher was there, all my agents were there. I was like, “Jesus Christ, I’m about to get onstage.” Confidence is also like, “Fuck you guys!” (Laughs.) I don’t blame them, but I was like, “Come on, give me a fucking second!”

You went from chaos to calm, but in an unexpected way.

Yeah! But it was a really fun show. Also the band before us was really good. They had overplayed their set and said something cocky as they left. “Good luck following that!” or whatever. It was a fun competitive thing. Not mean-spirited. My mom loved that show. I was going through much dark shit, but that ended up being a good one.

This tour is supporting Big Time. On the European leg, new songs took up over half the setlist. How do you choose what to play and keep a balance between new material and the older stuff fans want to hear?

I always play the singles, the ones that people know. It’s really funny to practice the older ones. We always play “Shut Up and Kiss Me.” And “Sister” is one we recently re-added. It’s difficult because I have so many songs that are six minutes or more. You have to choose between those. I can’t play “Lark” and “Sister” in a set all the time. Every now and then I’ll throw in a deep cut. Lately I’ve done one or two solo songs and then we do a cover. I’ll start with some upbeat ones from the new record and then the middle of the set is older songs. One week we’ll do the same set with a couple variations, then the next week it’s two other songs we haven’t been playing.

Your fans connect emotionally with your music. But what are your go-to albums when you are feeling particularly sad or happy?

I listen to On the Beach from Neil Young if I’m really sad. I listen to a lot of stuff when I’m happy that seems sad. Coltrane. I’d probably listen to ABBA or maybe the Bee Gees. We made a disco playlist for tour, after the set. It keeps everyone happy.