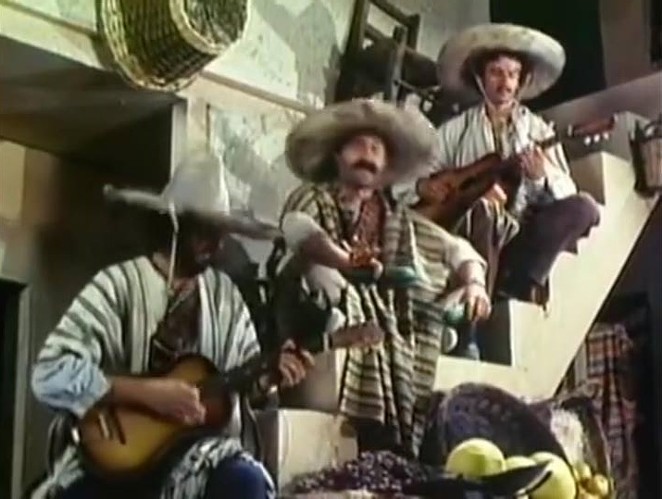 YouTube.com
"Illegal Alien" video, featuring Genesis in brownface
In the dark ages of American pop culture (a long time ago, like 1989), musicians didn't check themselves before wrecking themselves with misogynistic, racist and downright chilling songs. The cringe-inducing songs on this playlist contain just about every PC no no, making us wonder whether they would ever see the light of day on mainstream radio in 2016. Blatant drug references and explicit sexual lyrics don't apply, 'cause that shit's not going anywhere. Listener beware, you (and your ears) are about to be offended by yesteryear's pop music.

This year saw the rise of reality star-turned-presidential-candidate Donald Trump and his infamous stance against Mexican Americans. But, in his defense (not that he deserves it), he never threw on a fake bushy mustache and a sombrero like Phil Collins and crew. With a name that'd make any modern American blush with embarrassment, "Illegal Alien" goes full-on racist, as it tackles every Hispanic stereotype that exists, topped off with Collins singing with a faux Mexican accent. These days, the Alamo historian seems like the most unoffensive rocker ever. But as with everything, trust no one.

Although "Mongoloid" is supposed to be a satire on the de-evolution of American culture, there's no way getting past the fact that the word once used as an offensive term for Down's Syndrome. As the innovators of nerd rock, Devo likley had the purest intentions, but lyrics like "One chromosome too many" make the song more at home on 4chan's NSFW forum than mainstream radio. But no matter how awful it may seem, "Mongoloid" is still a banger. Oh the woes of being socially conscious...

As brilliant as their self-titled debut was, Violent Femmes never struck gold again. "Black Girls" is one of their most strangely offensive efforts, and this is coming from a band who've made a name out of sexual frustration and a song about having your way after getting a girl drunk and high. There's nothing wrong with liking "black girls, oh so much more than the white girls" but things get messy when a "faggot white boy" comes along. It ends with a Christian sentiment that'll have you begging to hear "Blister in the Sun" (a song about masturbation) again for the millionth time.