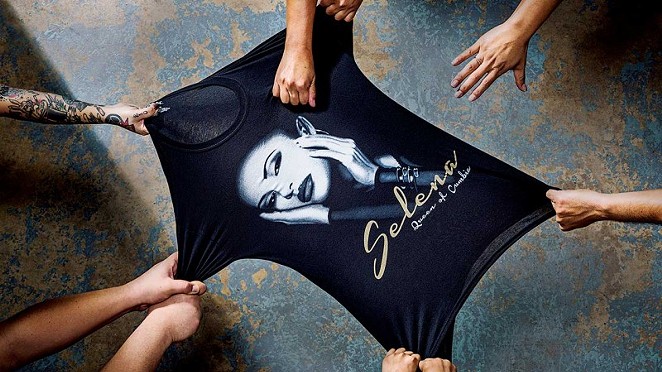 The Current erroneously reported that Corpus Christi CVB director of communications Ashley Higson Simper referred to Selena as "our little Hispanic girl." Simper was referring to a colleague.

After an article in the most recent edition of Texas Monthly, the Corpus Christi Convention and Visitors Bureau has discontinued its $150,000 annual ad campaign with the magazine. Though the long read focuses on the Quintanilla family's use and fans' unofficial use of the Selena brand, the CVB is concerned with the city's image as understood by writer Jeff Winkler.

The issue revolves around Corpus Christi's presentation and a quote from the CVB director of communications.

"Corpus is not the prettiest of cities," writes Winkler. "Much of it looks like Cuba, had the island country been invaded by VFW Post #3837 and colonized by the local Kiwanis Club."

In the piece, CVB director of communications Ashley Higson Simper referred to a colleague with institutional knowledge about Selena as "our little Hispanic girl." Winkler includes the quote in a paragraph about cultural divide between anglo and Mexican-American communities in Corpus Christi.

In response, the CVB revoked its substantial ad deal with Texas Monthly. Speaking with the Corpus Christi Caller-Times, bureau CEO Paulette Kluge said, "We are not an ugly city. From the first paragraph we felt it was unflattering and that continued through 19 long, torturous pages."

According to the paper, CVB employees are also undergoing "sensitivity training."

Despite the heat, Winkler's "Amor Prohibido" does ask some important questions. Who should own the image of Selena? Should die hard fans be able to put on an unofficial festival in conjunction with the official Fiesta de la Flor? "How does a Quintanilla-approved debit card with Selena’s image fit into [Selena's] legacy preservation?"

Suzette Quintanilla, featured in the article, also expressed concern with the approach. "I just feel like he's bashing," she told the Caller-Times.