When it comes to rap samples, it's better to ask for permission first than to do it anyway and apologize later. It's been a staple of the game since its roots to sample or reinterpret the works of other artists in beats and instrumental tracks, but forget that compositional credit to the original artist and it'll cost a pretty penny. Sting apparently still makes $2,000 a day in royalties from P. Diddy's "I'll Be Missing You," which sampled his 1983 Police hit "Every Breath You Take" without permission. Artists from Kanye West and Ludacris to the Verve (who lost 100 percent of the royalties on their '97 hit "Bitter Sweet Symphony" to the Rolling Stones for skipping the paperwork) have been sued in recent years for uncredited samples. 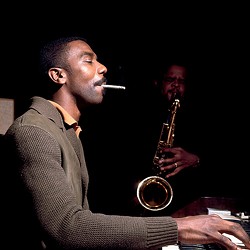 Now, Drake is the newest inductee to the Hall of Forgetfulness, apparently skipping a nod to the late Hammond B-3 master and Blue Note recording artist Jimmy Smith. On "Pound Cake," from 2013's Nothing Was the Same, Drake sampled the closing track, "Jimmy Smith Rap," from the organist's 1983 Elektra date Off the Top. Smith's work has appeared on rhymes from the Beastie Boys, Nas and De la Soul, who gave proper credit to Smith, called the "Eighth Wonder of the World" by Miles Davis.

The strangest part is that Drake sampled a vocal take from Smith, avoiding his vicious organ grooves entirely. It's not integral to Drake's "Pound Cake," so perhaps that's why Jimmy Smith's estate is only (lol) suing for $300,000.