From the Rabbit to the Aztec: Nothing More Vocalist Jonny Hawkins On Becoming a Chart-Topping Rock 'n' Roller 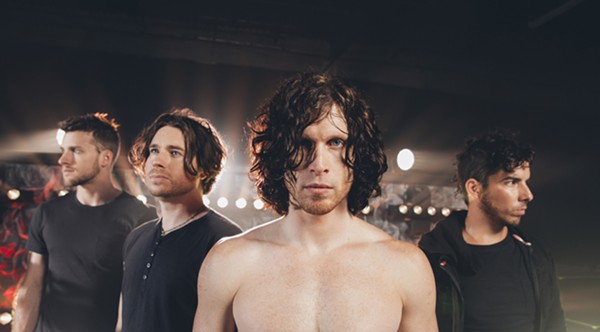 It’s not everyday a band from San Antonio shows up on Billboard and iTunes charts. Let alone at high positions on them. But upon the release of their latest effort The Stories We Tell Ourselves (released back in September) San Antonio rockers Nothing More found themselves on some peak positions including No. 5 on the Billboard Top Current Albums Chart Debut, No. 2 on the Billboard Independent Album Debut, and No. 3 on iTunes' Album Debut to name a few.


But it’s not all just good publicity and high-quality production on their albums; the four-piece have been putting in work since 2003 – paying their dues on the local San Antonio live music circuit playing places like Jack’s and The White Rabbit (now Paper Tiger), and touring extensively (new bands take heed). And what also stands out to us for these hometown heroes is that, while they may be be procuring national radio airplay (alongside Foo Fighters and Theory of a Deadman), the level of musicianship and dynamic songwriting is undeniable.


Especially on this last album, drummer Ben Anderson, guitarist Mark Vollelunga, vocalist/percussionist Jonny Hawkins, and bassist Daniel Oliver showcase their ability to write contemporary rock ‘n’ roll that’s heavy and heartfelt without sounding corny – a pit many an “active rock” band fall into. The Stories We Tell Ourselves blend technicality, thought-provoking lyrics, and enough pop aesthetic to sound approachable to the casual rock listener all while satiating the ears of folks who fancy the harder end of the music spectrum. To put it simply: it's a dope record, and we're not just saying that 'cause they're from here.

The Current caught up with vocalist Jonny Hawkins who is currently on Nothing More's headlining U.S. tour, to talk about the new album, and what it was like playing San Antonio in the early days. 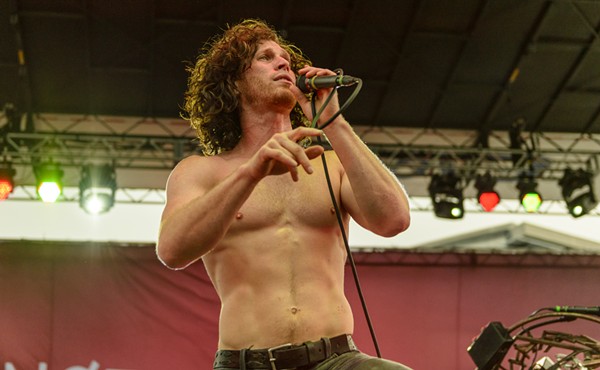 Thanks for taking the time to chat with us. You guys are from here and are doing big things, so it’s awesome to get a chance to check in with y’all. So, what’s been the most fun or best part of touring on this particular tour?

Thanks. Playing Halloween last night and getting to dress up in costume. We all dressed up as classic '80s and '90s wrestlers (laughs)

That was so fun, It’s almost like it takes some of the pressure off. It’s like worrying so much about the show and every little thing being perfect we’re just having fun. So that was a nice change of pace.


Are you thinking a lot when you’re on stage?

Yeah, I’ve got a million thoughts going at once when I’m performing. It may look like I’m doing one thing, but my head a lot of times is in 10 different places. I, actually, as a performer, usually try to mitigate that, you know ‘cause a lot of times [when performing] you get in your head and you’re not in the moment, but last night the costumes really helped me get out of my head and just have fun.


What are people’s reactions to y’all when they find out you're from San Antonio?


What was y’all’s experience playing in San Antonio when y’all first started out here? Was there a lot of support from the get-go?

Out of the gate we had a good experience. And we got a little bit of a grassroots following just through our friends. And back in the day, there was the White Rabbit and we used to play there a lot and we also played Jack’s – that was our home bar for a while just ‘cause they paid us well and we grew a little following there. And it was good, but there were bumps along the way. There were some shady promoters, and people that would say things and not follow through –


Promoters and shadiness are sort of synonymous anyway (laughs)

(laughs) I know. Especially in San Antonio, there’s a lot of shady ones, and we just had to navigate through that … I’m thankful in many ways to have grown up [in San Antonio] ‘cause there wasn’t as much of a push to follow a particular trend and some people could look at it go ‘Oh well culturally or artistically this city or that city is behind or or ahead’ or whatever, but sometimes it’s not really a behind or ahead thing it’s just kinda like – when I go to LA for example. I find that a lot of people just start turning into the same thing, even though it’s different than other places in the country, it’s still kind of this conformist thing and so I feel like, in San Antonio, I had a little more of a void to work in. There wasn’t a defined music scene. it was kind of augmented. 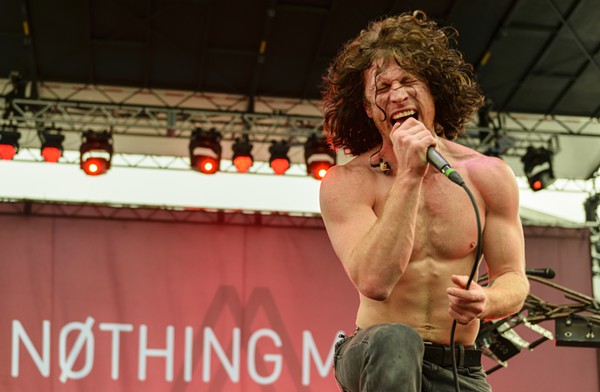 Besides hardcore and metalcore in the mid 2000s.
Yeah.

There was a lot of that. And ya’ll fall into that ambiguous “active rock” genre. It’s kind of like how in the '90s we called everything alternative rock ‘n’ roll even if it was bands like Tool or Smashing Pumpkins. It’s just rock ‘n’ roll.


Have people been pretty supportive of y’all success here in San Antonio? I’ve talked to other bands that have gotten big here and come back and they’ve talked about how some folks are jealous of their success. Has there been a pretty positive response from folks that knew y’all back then or is there some shade being thrown y’alls way?

(laughs) Good question. Most of it is positive. I think a lot of our friends or people that we haven’t talk to in years but were there in the beginning – our lives get busy and stuff – and they’ll check in with us like 10 years later and be like ‘holy shit – representing San Antonio,’ ‘always knew you guys would do it’ or real positive things like that. But there are those bands or musicians that really are just trying to get something from you.

Yeah, yeah it’s always a request of some sort and I get it. I don’t blame anyone for asking or thinking that. It’s kind of the intuitive thing to do when you’re a young band and I think we used to do the same thing. But as time goes on you start realizing that ‘wow that doesn’t do anything for anybody’ the only thing that builds your following and career is just focusing on building your own fanbase and not trying to – the shortcuts really don’t work. There’s no shortcuts today especially.


That’s some great advice, I’m glad people are going to be able to hear that from you. So how does it feel to see this type of success? You guys are doing well on the Billboard charts.

Yeah, it’s pretty amazing, you know I think I’d feel it more if it happened overnight and I hope this doesn’t sound pessimistic, you know, having done this over 10 years it’s only select moments where I actually take a breath and maybe have had a few drinks in me and have that real ‘whoa’ look-back-from-the-view kinda thing. But most of the time are heads are down and even if we’re getting charting positions, we’re like ‘Cool – alright, what’s next? What are we working on? How do we keep moving the ball forward?’ … I had one of those moments last night which was nice to kind of reconnect with that feeling and that sense of how far we’ve come. ‘Cause you do get lost in the day after day after day of building [success], it’s really hard to appreciate it sometimes. 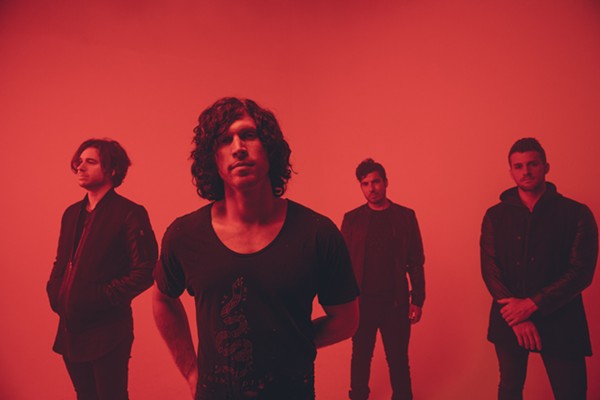 What’s something that most people don’t know about y’all? Like, are y’all secretly Satanic? What’s that one thing?(laughs)

Nailed it! That was it, that was the one thing I was gonna say (laughs) Let me think real quick. I would say that we all grew up Christian and in the church. And were super religious when we were young. I shouldn’t say "super." Not like freaky fundamentalist.

Yeah, we were church kids, and then as we’ve gotten older, with me, I’m definitely more scientific-based [in my beliefs], kinda atheist-agnostic. It doesn’t mean that there’s greater forces at play, I just don’t agree with what I grew up with. So a lot of people have mixed knowledge of what we believe, ‘cause what we believe is an ever-changing evolving thing as we get older


As it is with people in general.

Yeah, a lot of people will read our lyrics – because we did grow up in the church – a lot of [our lyrics] will rip out biblical metaphors and play off some things in the bible. Like “a little sleep a little slumber.” I think that’s from a proverb or Psalms or somewhere in there, and we used that for our song “Jenny.” And so some people will go 'Oh, I think they’re a Christian band’ or this and that, which, we’re not (laughs). But we do search for positivity and trying to find meaning in a meaningless universe.


And that definitely reflects in y’alls lyrics. And there’s a lot of artistry there. There’s a lot of of this singer-songwriter aspect of what y’all are doing really set’s ya’ll apart from a lot of bands in your genre, which I think is really cool. There’s a message and it’s positive, but it’s also self-searching. Like the lyrics in the opening track “Do You Really Want It:” “Everybody wants to change the world / but one thing's clear / no one ever wants to change themselves / that's the way things are” there’s a lot of cool stuff that’s going on in this album.


Yeah, thanks for chatting with us we’re looking forward to show at The Aztec.

Thanks for the support. We’ll see you in San Antonio.