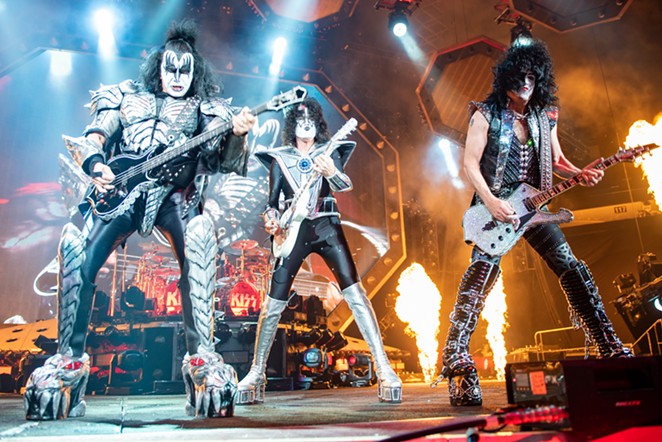 Jaime Monzon
Members of KISS decimate San Antonio.
I am not a KISS fan.

Though I knew someone in the KISS Army back in high school, that individual's proselytization did not sway me to surrender my will to the NYC dinosaur rockers. Being 32 years old, I missed their primetime by a few decades.

However, Sunday night at the AT&T Center, I could really see why these guys are some of the most legendary rockers on the planet. Walking into the packed arena, I was greeted by a sea of faces in KISS makeup and armor — and we're talking multiple generations here — as I made my way to my seat.

After performance painter Garibaldi opened the show — he paints rock icons like Jimi Hendrix and KISS in less than 10 minutes — the lights went low and a deafening cheer erupted from the audience.

I’ve seen massive pop and rock shows with floating stages and pyrotechnics, but as KISS erupted into their opener “Detroit Rock City” I had a feeling I was in for something truly truly unique.

My convictions were true.

Decked out in platform boots and armored outfits stitched with chains, spikes and metallic textures, Paul Stanley, Gene Simmons, Eric Singer and Tommy Thayer captivated audiences as they traveled through the band's entire catalog of hits.

“How we doin’ San Antone?” Stanley asked after finishing “Shout.” “So here we are on a Sunday night. We got a whole week ahead of us. What do you say we have a rock 'n' roll party?”

He continued: “We been coming here since 1975. At the Municipal Auditorium. I wanna know where the crazy people are, since I know how crazy y’all can get.”

The band immediately jumped into “Deuce,” as hovering, spiked octagons above the stage reflected lasers across the sold-out arena.

The next hour and half was an assault of the senses as literal fire balls shot across the stage, sparks flew out of Thayer’s guitars, and Simmons was suspended 100 feet above the audience before performing his infamous blood spewing act.

Whether you were a longtime KISS fan or just getting into the band, the show was designed to make you fall in love with the guys or remind you why you bought into their act in the first place.

If you were there last night, you know what I’m talking about. If you missed it, you may have missed one of the best rock 'n' roll shows — at least in terms of over-the-top theatrics — that San Antonio has ever seen. 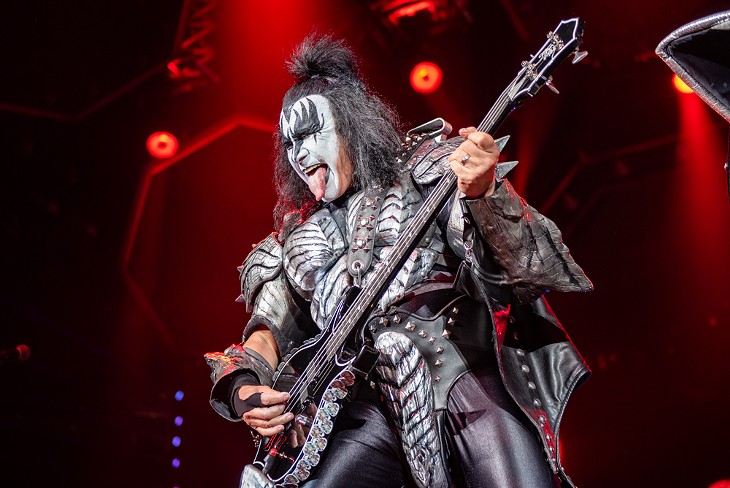 Click to View 104 slides
Get our top picks for the best events in San Antonio every Thursday morning. Sign up for our Events Newsletter.
Scroll to read more Music Stories & Interviews articles
Join the San Antonio Current Press Club