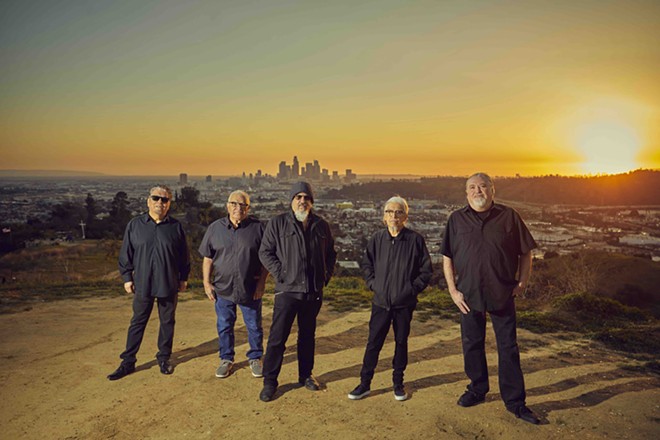 Perhaps no rock band is better suited to make an album covering songs by other artists than Los Lobos.

For 40-plus years, the great band from East Los Angeles has made cover tunes a regular part of its live shows, playing versions of songs from artists as wide-ranging as Bob Marley, the Grateful Dead, Marvin Gaye, John Lee Hooker, the Blasters and Cream. Indeed, Los Lobos' biggest commercial success came in 1987 with a chart-topping cover of the Ritchie Valens classic "La Bamba" for the movie of the same name.

Not only that, but over the course of a dozen studio albums, Los Lobos has shown a deep knowledge of blues, rock 'n' roll, folk and Mexican music while creating a rich catalog of songs that's stylistically diverse, frequently innovative and somehow also cohesive.

But it took a bit of necessity to make Native Sons, the covers album that won a Grammy in April for Best Americana Album, a reality. The band is likely to dig into material from that record when it performs Thursday, Aug. 11 at storied Texas Hill Country venue Gruene Hall.

After signing a deal with New West Records to make a new album, Los Lobos saxophonist-keyboardist Steve Berlin and his bandmates realized they wouldn't have time to write and record an LP of original material in 2020 because there weren't any real breaks in their tour schedule.

But if the band took writing a bunch of songs out of the equation, an album would be doable. A covers album fit that bill.

Of course, 2020 ended up being a whole lot less busy than expected for Los Lobos thanks to the pandemic cancellations. But Los Lobos stuck with the covers project, and it ended up being beneficial to the band, which includes Berlin, David Hidalgo (guitar, accordion, vocals and more), Cesar Rosas (guitar and vocals) Louis Pérez (guitar and vocals) and Conrad Lozano (bass).

"The interesting thing is we started this record before [the pandemic] all went down, and in a weird way, it sort of kept us sane, I think," Berlin said in a recent phone interview. "Once it was safe-ish to travel, we started doing like three or four days a month, maybe like two or three songs and just tried to do whatever we could just to keep the ball rolling, keep ourselves engaged, keep ourselves thinking about music. ... In a weird way, that's how we got through it, kind of coming and going and focusing for a little while and then stepping back."

Deciding on the type of covers album to make, though, was not an easy question to resolve. Berlin thought back to Llegó Navidad, the 2019 Los Lobos album based around Mexican holiday songs. Building on the sharp focus that made that project work, Berlin, who produced Native Sons, proposed limiting the covers album to songs from Los Angeles artists that had influenced Los Lobos.

"There was not unanimity among the band members as far as whether or not it was a good idea," Berlin said. "I think there was significant pushback and some of the guys were like 'How's that going to work?' and 'Why are we limiting ourselves? I have songs I want to do that are not about LA' And I just said, my point to them was, let's just see if it works. If it doesn't work, we'll pull the plug, whatever. It doesn't matter. But let's give it at least a try and see where it takes us. Let's just see. So, with that attitude we started."

Ultimately, the band found there were plenty of Los Angeles song choices, and they make Native Sons a lively, highly entertaining 13-song album that showcases some of the LA artists that helped shape Los Lobos' own music.

Classic rock is represented by a medley of Buffalo Springfield's "Bluebird" and "For What it's Worth." There's jump blues with Percy Mayfield's "Never No More," and garage rock is represented with "Farmer John" (made popular by the Premiers). Some vintage roots rock comes courtesy of "Flat Top Joint," a song by good friends and Los Angeles compatriots the Blasters — the band Berlin played with before he joined Los Lobos. Soul music enters the mix with War's "The World Is A Ghetto." There's also the sunny pop of the Beach Boys' "Sail On, Sailor" and the rich storytelling and country-tinged pop of Jackson Browne's "Jamaica Say You Will." Los Lobos' Mexican musical roots are represented in the songs "Dichoso" and "Los Chucos Suaves."

With its deep catalog of songs, Los Lobos has typically changed up set lists from show to show on tour. And now that new drummer Alfredo Ortiz is on board and up to speed on the material, the band should have plenty of options for set lists.

"[Ortiz] used to play with the Beastie Boys for many years," Berlin said. "But we'll obviously be featuring the new record, which is great because [the songs] are super fun to play, and the fans always seem to enjoy the covers anyway."