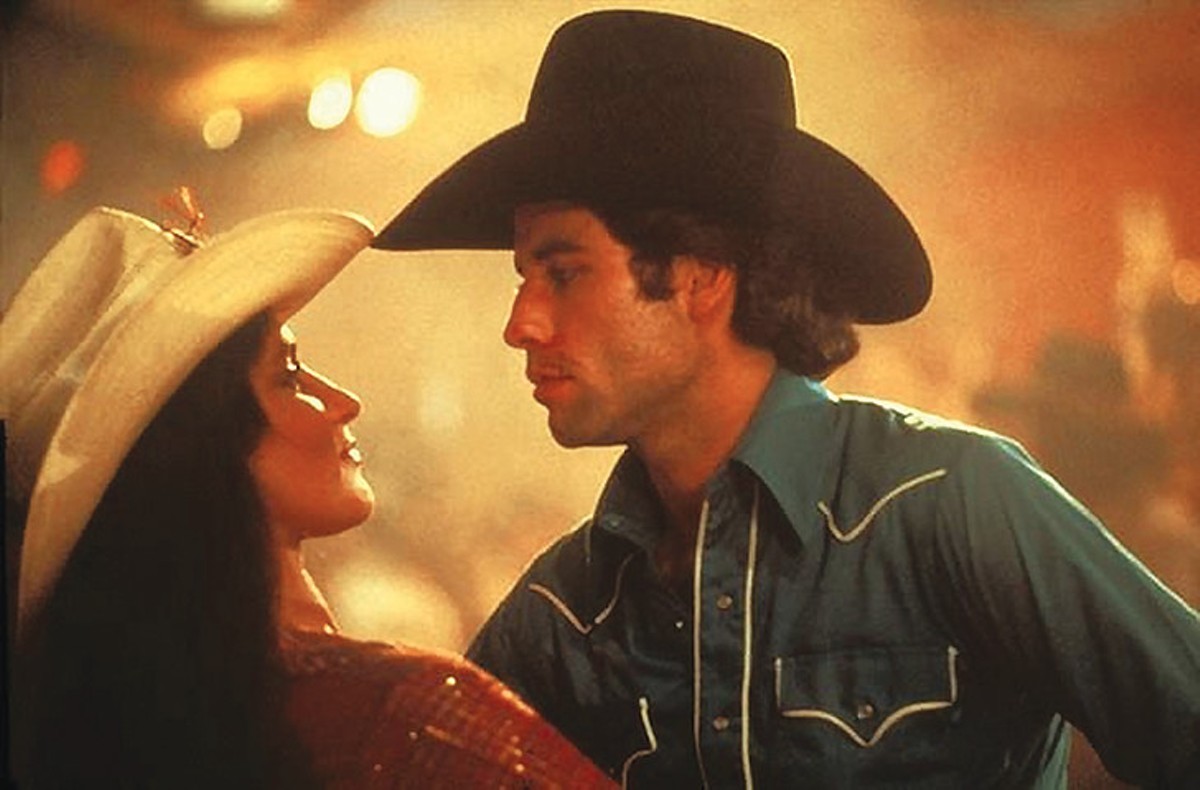 I truly want nothing more from a movie than a soundtrack packed to the gills with borderline hokey, hick masterpieces, a leading lady who goes by the name of Sissy whose pick-up line is "You're a real cowboy, ain'tcha?" a Dolly Parton lookalike contest, rampant homo-eroticism, "the world's largest honky tonk" and John Travolta.

The importance of Urban Cowboy, although easy to lampoon as another instance of capitalistic culture-mining, should not be overlooked. The genre-bending soundtrack, along with the resulting attention paid to Texas and blue-collar cowboy culture, drives many spectators to downplay the film as a campy case of Hollywood preying upon and playing up the city-billy lifestyle. Especially as the film and subsequent soundtrack was one of the first snowflakes to get the snowball of rodeo chic, country couture, rolling — a craze that would eventually sweep across the nation and help shift the entire musical genre into a leisure-suited direction, from which it has arguably never returned.

Based on an Esquire article of the same name, Urban Cowboy is the true tale of a couple who meet and fall in love over a mutual affection for Lone Star beer, country music and a mechanical bull. It seems Bud (Travolta) and Sissy (Debra Winger) meet, boot-scoot, marry and split in the time it would take to waltz your partner once around the dance floor of Gilley's, the barroom setting for 90 percent of the film. Enter "real cowboy" Wes Hightower, a shear, see-through shirted ex-con and the perfect payback. With the inclusion of conventional honky tonk groups such as Charlie Daniels, Mickey Gilley and Johnny Lee, alongside cosmo country artists like Boz Scaggs, Bonnie Raitt, Dan Fogelberg and the squeaky-clean Anne Murray, the film was the perfect avenue for mainstream America to try out their Texas training wheels.

Truly, with the advantage of 35 years of hindsight, it's especially easy to see the domestic abuse and juvenile preconceptions of marriage — success as a double-wide trailer and an oil refinery job — as a satirical send up of all that was wrong with the macho-mongering of the kitsch-heavy culture (see, now it's an art piece). However, the soundtrack does for me what good music does for all: transports us outside of ourselves into a world of the music's making, in this case a 127,000-square -foot country bar in Pasadena. Did I mention there's a Dolly Parton lookalike contest and a mechanical bull?