This year's celebration will feature a larger procession, along with a four-stage lineup of musical performers. 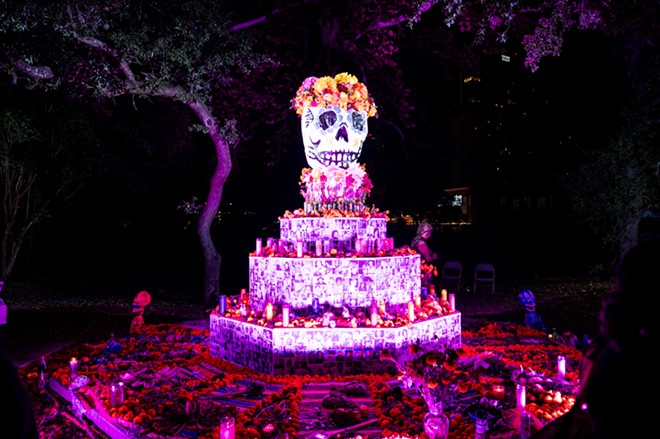 Jaime Monzon
The festival, running from Oct. 29-30, will feature live music, an arts markets and a dance-and-drum procession.
One of the country's largest Día de los Muertos celebrations is returning to Hemisfair for its 10-year anniversary, according to organizers.

The free two-day festival celebrating the Day of the Dead will run Oct. 29-30 and feature a four-stage lineup of bands, an arts market and a dance-and-drum — along with plenty of activities for the niños.

"San Antonio is fast becoming the capital of Day of the Dead celebrations in the U.S., and Día de los Muertos at Hemisfair is leading the way in that honor," said Jim Mendiola, the festival's artistic director. "For 10 years, Día de los Muertos has provided an event for the regional community to remember family members and together we've created a truly unique event with national recognition, and we look forward to sharing our celebration with a national television audience."

Muertos Fest was ranked one of the Seven Best Fall Festivals in the U.S. by National Geographic Magazine,  and to mark its 10-year anniversary, the gathering's signature procession will be larger. The celebration will be broadcast on KSAT 12 as part of a two-hour evening special on Oct. 30.

More information about the event and its entertainment lineup is available online.