The award-winning journalist writes about immigration for The Atlantic and has been on the ground in war-torn regions and along the U.S.-Mexico border. 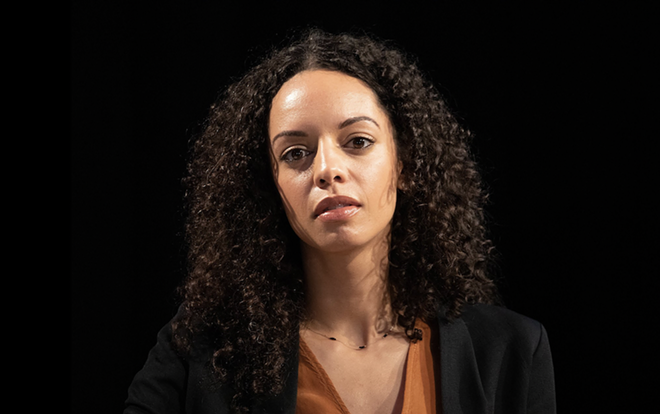 Wikimedia Commons / nrkbeta
Caitlin Dickerson photographed during a 2019 SXSW appearance.
In 1994's The Paper, widely regarded as one of the best movies about journalism, a reporter who covers celebrity news somewhat facetiously asks his metro editor, Henry Hackett, "What do you got for me, Henry?"

Had a billionaire wastoid like Elon Musk been speaking at Trinity University's Laurie Auditorium Thursday, the place would have undoubtedly been packed. Instead, a scattered audience of perhaps 100, mostly students, showed up to hear a Peabody- and Edward R. Murrow Award-winning journalist who has dedicated her career to amplifying neglected voices.

That journalist, Caitlin Dickerson, writes for The Atlantic, and her beat is immigration. In that role, and in her past work for the New York Times and other outlets, she's been on the ground in war-torn regions and on the U.S.-Mexico border.

"Global displacement is an issue that impacts one in every hundred people on the planet, including 30 million children," she said during Trinity's 2023 Martin Luther King Jr. Commemorative Lecture. "But not all displaced people are viewed as equally deserving, and their treatment does often come down to their nationality, their religion or their race."

One timely example of the racially disparate treatment of people fleeing violence is Poland, which Dickerson has covered extensively. When confronted with an influx of tens of thousands of refugees from the Middle East in the wake of wars in Syria, Iraq and Afghanistan, leaders in Poland continually insisted that the country was full up and lacked adequate resources to help.

Yet, after Russia's brutal invasion of Ukraine, millions of displaced Ukrainians found refuge in Poland and have been welcomed with open arms instead of water cannons.

That dichotomy is reminiscent of the United States' hostility to desperate immigrants from Latin America despite our bipartisan reliance on cheap migrant labor. "I feel like I am being treated like a criminal when I am a victim," one asylum-seeker said in the Texas Tribune, summing up her recent ordeal crossing the border into El Paso.

Dickerson explained in her post-lecture interview that an ambivalence toward certain types of immigrants is deeply ingrained in U.S. history.

"This notion that immigrants are people with dark skin who are predisposed to disease and to committing crime is the oldest story in this country," she said, adding that "at one point, immigrants from Ireland and Italy were considered people of color."

Dickerson spent two years investigating the Trump-era policy of separating migrant parents from their children, and as she told the Texas Standard last summer, "there are hundreds of families that still have not been reunified."

Throughout his life, Martin Luther King Jr. counseled Americans to "develop a world perspective." During her lecture, Dickerson raised questions vital for developing just such a view.

Among those: Who do we consider an outsider and who a neighbor? And how can a nation built by immigrants atone for its past cruelties and stop those it's currently inflicting?