The aerospace company also made a $2.3 million donation to an educational nonprofit affiliated with Port San Antonio and unveiled a new exhibit there. 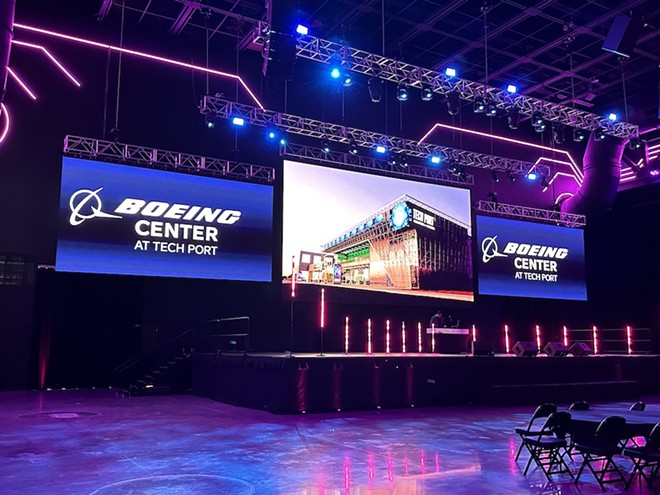 Michael Karlis
Boeing has more than 3,000 employees at Port San Antonio and 5,700 employees across Texas.
San Antonio's $70 million Tech Port + Arena has a new name, a new science exhibit and a new pop-up store, all sponsored by one of the city's highest-profile employers.

As part of the relationship, Boeing also unveiled an exhibit called the Boeing Aerospace Adventure at the San Antonio Museum of Science and Technology (SAMSAT), also located at the arena. The state-of-the-art flight simulator will allow guests to fly an array of Boeing airplanes. 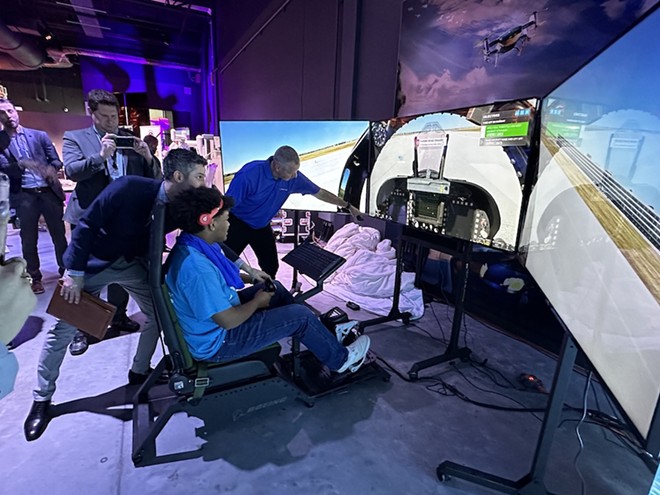 Michael Karlis
John Barnes, a senior at South San Antonio High School, tries out the new Boeing Aerospace Adventure flight simulator at the San Antonio Museum of Science and Technology at the recently renamed Boeing Center.
Boeing also opened a pop-up apparel store on the arena's main concourse that will remain open for a "couple of days," according to a Port SA spokesperson.

Officials declined to offer details about how much Boeing paid for its seven-year naming rights deal. However, Boeing Global Services President and CEO  Stephanie Pope said the company will donate $2.3 million to the Kelly Heritage Foundation, an educational nonprofit affiliated with Port San Antonio, as a part of the transaction.

Boeing's $2.3 million donation will go towards expanding the nonprofit's STEM program and workforce development with the help of partners including the SAMSAT.

"These are technologies that are changing the world, making it a productive and a safer place," Rocha Garcia said to the over 100 high school students also in attendance at Tuesday's event. "We are creating exciting career opportunities for you right here so that you don't have to leave San Antonio."

Boeing is one of the Alamo City's largest employers. Since 2018, the aerospace company has tripled its staff to more than 3,000 people at Port San Antonio. It employs 5,700 people across the state, according to the Express-News. 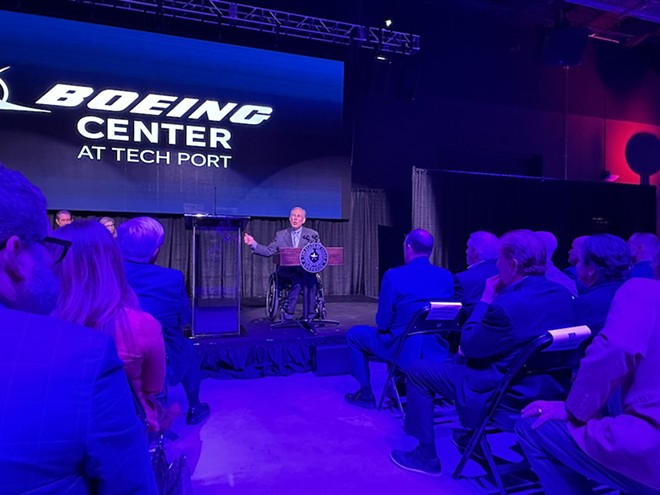 Michael Karlis
Texas Gov. Greg Abbott said Boeing's work at San Antonio's Tech Port is essential in helping support the Texan economy.
All profits earned from concerts, E-sporting events and other exhibitions at the Boeing Center are also donated to the Kelly Foundation.

"You see, we're never going to make a penny off this building," said Jim Perschbach, president and CEO of Port San Antonio. "Every concert you go to, every $15 beer you buy from us, it all goes to supporting the Kelly Heritage Foundation."

"I'm proud of the work that Boeing is doing in Texas. Boeing helps Texas be the No. 1 economy in the United States of America," Abbott said, referencing new data released by the Federal government on Tuesday. "But, just as important as what Boeing is doing for our economy is what they're doing in educating young Texans, especially with this revelation of the Boeing Center at Tech Port."