The update on Cantu's condition comes days after ex-SAPD officer James Brennand was indicted by a grand jury for attempted murder. 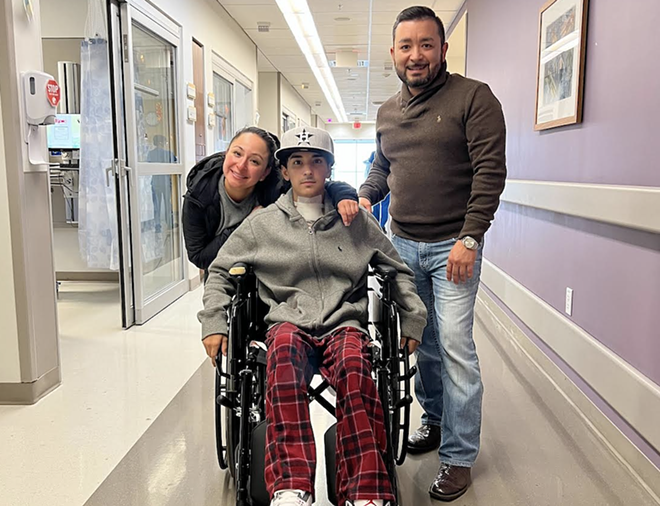 Courtesy Photo / Cantu Family
Erik Cantu (center) is photographed with his parents at University Hospital.
Two weeks after being released from University Hospital, Erik Cantu — the teen shot multiple times by a since-fired San Antonio police officer — was readmitted, according to his family.

The update, posted on a GoFundMe campaign site, said Cantu returned to the hospital due to complications with his stomach and digestive tract. It's unclear whether Cantu is still hospitalized.

"Unfortunately, another 3 days back in the hospital from complications to his stomach/digestive track," the Dec. 3 update said. "Yet again we make our way back home with our hearts in our hand knowing this is not the end, only the beginning to a whole new life."

On Oct. 2, Cantu was shot multiple times in a McDonald's parking lot by James Brennand, then a rookie San Antonio Police Department officer.

Brennand was fired from the force days later. Last week, a grand jury indicted the former officer on two counts of aggravated assault by a public servant and one count of attempted murder.

During a press conference last week, Bexar County District Attorney Joe Gonzales told reporters that his office will seek the maximum penalty for the charges.