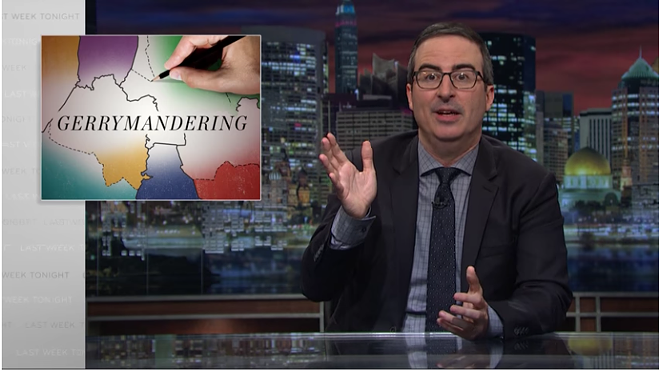 Screenshot via youtube.com
John Oliver delivers a lesson about gerrymandering in the U.S.

With his typical pedagogical fury, John Oliver gave a lengthy lesson in gerrymandering Sunday night that also made a vague connection to Spurs legend Tim Duncan.

First off, gerrymandering is redrawing voting district lines to influence the outcomes of an election—to disadvantage voters based on race, political party, or shore up seats for incumbents, said Oliver.


The Duncan segment ramps up with some startling statistics: that in 2012 there were 1.1 million more votes for Democrats, yet somehow 33 more Republican members ended up in the House.


According to Oliver, Republicans credit their success in 2012, when they gained a majority in the U.S. House, to a project called REDMAP or Redistricting Majority Project. The REDMAP website states their strategy for the 2012 election began in 2010. The goal was “keep or win Republican control of state legislatures with the largest impact on congressional redistricting as a result of reapportionment.”


Okay — so what does Republican gerrymandering have to do with Tim Duncan?


"The maps they drew put Democrats at a significant disadvantage," said, Oliver, as a photo of Tim Duncan appeared on the screen.


"It's like... instead of Tim Duncan, the San Antonio Spurs had to use Tim Burton." Then, in place of the basketball player, an image of pale, short Burton with the rest of the team emerges.


"It's not technically impossible to win," he said, "but it's going to be much, much harder."