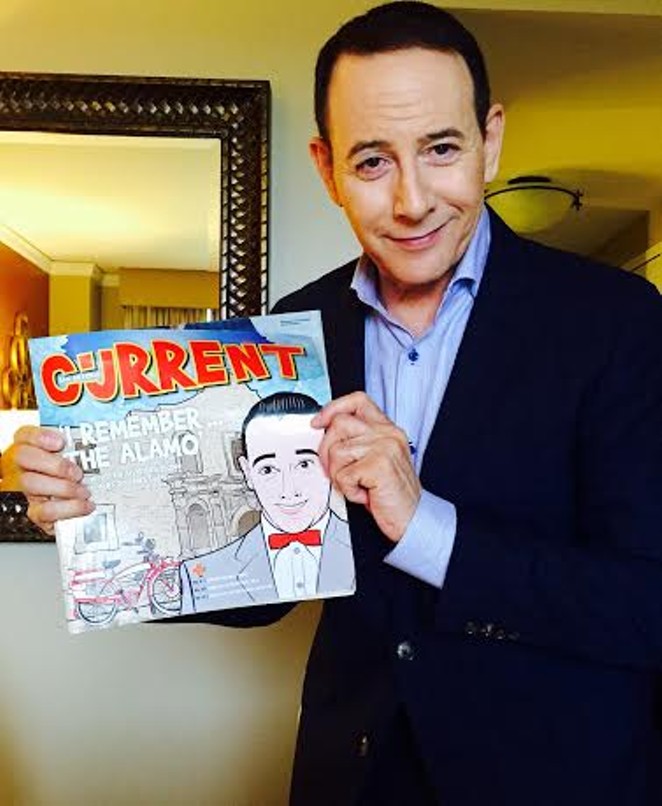 Paul Reubens (AKA Pee-wee Herman) at the 2016 South by Southwest Film Festival holding a copy of the August 5-11, 2015 issue of the San Antonio Current, which was dedicated to the 30th Anniversary of Pee-wee’s Big Adventure. Reubens was in Austin for the premiere of his new film Pee-wee’s Big Holiday.

Last summer, I wrote a cover story for the San Antonio Current on the 30th anniversary of the 1985 comedy Pee-wee’s Big Adventure.

It took me about a month to track down some of the actors from the film, including Elizabeth Daily (Dottie), Diane Salinger (Simone), and Mark Holton (Francis).

Although I was able to connect with publicists for Paul Reubens (Pee-wee) and request an interview, his tight filming schedule ultimately prevented us from chatting on the phone. Asking him about the half-day he spent in San Antonio back in 1985 to shoot exterior shots at the Alamo just wasn’t in Madame Ruby’s cards at the time.

Seven months later, I found myself sitting across from Reubens at the South by Southwest Film Festival asking him questions about his new movie Pee-wee’s Big Holiday, the third film of the franchise, which hit Netflix March 18.

Spoiler alert: In the movie, Pee-wee decides to leave the comfort of his small town of Fairville and travel the open road to New York City to attend the birthday party of his new friend and actor Joe Manganiello of True Blood and Magic Mike fame (Manganiello plays himself).

Of course, Pee-wee is not very prepared for his trip when he meets a crew of female bank robbers, a shotgun-toting farmer looking for a son-in-law, and a monstrous snake.

During our interview, I finally got a chance to ask Reubens about the few hours he spent in San Antonio 31 years ago.

The scenes in the Alamo City turned out to be only 20 seconds of footage in the final film, but Reubens remember his time here fondly.

Here’s what he had to say: “I remember how beautiful the city and the Riverwalk were. My father had been stationed [in San Antonio] in the Air Force. He told me about it.

The film commission met us. We were nobody. [Pee-wee’s Big Adventure director] Tim Burton was 26 years old. Nobody knew who any of us were. Pee-wee Herman wasn't known. The director wasn't known. The producers weren’t known. [But] they treated us like we were special.

They took us to a Tex-Mex restaurant. None of us were really used to Tex-Mex food at the time so the next morning we woke up like, ‘Oh, my God!’ I don't think we even had a [film] permit, to be honest with you.

I know the film commission met us, so it was official, but I don't think we had a permit. We had a camera on a tripod. I put on my suit. I ran into the Alamo and I ran out of the Alamo. And then we got on the plane and flew away.”

It might’ve been a very quick trip, but Reubens will always be remembered as the star of a film that will forever be a part of San Antonio’s cinematic history.

And for that, we thank him.