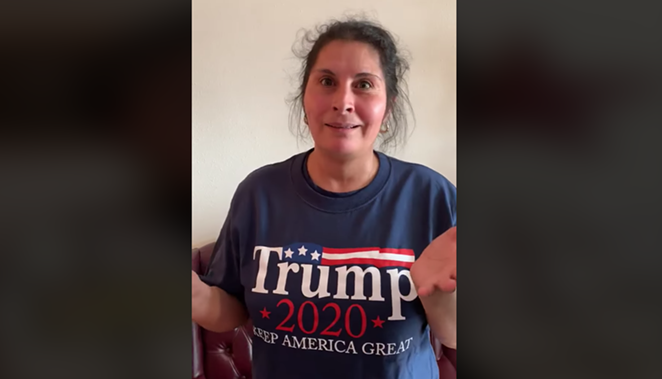 The inspector, however, said he asked them to peel off the sticker because it covered a brake light on a rear window, not because of politics.

The couple, Tim and Cathy Rodriguez, involved the RPBC, and Brehm alleges that the inspector's request was a politically-motivated attempt to suppress their right to free speech.

In a Facebook video, Brehm interviewed the couple, who said the inspector at Jerry's Auto Service told them to remove the sticker during an August 9 visit to the shop. They allege that the employee told them he wasn't able to do the inspection until it was removed.

"I was puzzled and confused as to why he wasn't able to do the inspection," Cathy Rodriguez said in the video.

It's worth noting that Brehm is no stranger to making controversial claims. Earlier this summer, she alleged that county elections officials had tampered with ballots. She's also faced criticism for failing to disclose during the 2018 election campaign that her husband once pleaded guilty to indecently exposing himself to Brehm’s daughter when she was a minor.

In the recent Facebook video, Brehm assured local Republicans that their freedom of speech is protected.

"Your vehicle is your personal property, and you are protected by the U.S. Constitution," she said. "You do not have to take off that sticker."

The video, which ends with the couple and Brehm all saying "Trump 2020," has grabbed the attention of local conservatives. In the comments on the video, many are encouraging a boycott or protest of Jerry's Auto Service.

KSAT spoke with the inspector, Gustavo Martinez, who said he asked the couple to remove the sticker because it covered a brake light, which could prompt police to pull them over. Martinez said he was just doing his job.

"If the light is not visible, it's not going to pass inspection," he said.

Martinez said Cathy Rodriguez seemed upset but didn't confront him. Instead, he said she removed the sticker and told her husband she had another one to replace it.

"There was no reason to remove the sticker, but [the Rodriguezes] chose to comply and remove it just to get the vehicle inspected," Brehm said. "I think this had everything to do with politics. This is why he had them remove the Trump sticker."