The first congressional funding bump in a decade for the federal agency overseeing U.S. labor law came in at just $25 million. 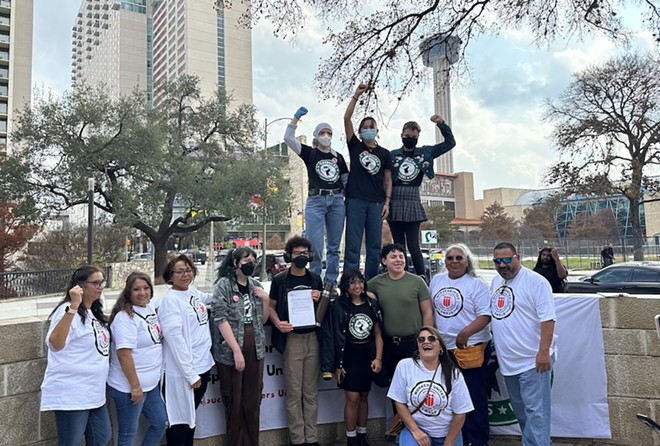 Michael Karlis
Organizers from Starbucks Workers United rally earlier this month in downtown San Antonio to commemorate the one-year anniversary of the first Starbucks location voting to unionize.
Despite increased labor organizing activity across South Texas — and the country — the first congressional funding bump in a decade for the federal agency overseeing U.S. labor law came in at just $25 million.


The increase, approved as part of the massive omnibus spending bill, will help the already understaffed National Labor Relations Board avert furloughs, something unions said would cause further blows to their mission. Even so, many worry the additional money simply isn't enough.

Frank Perkins, President of Teamsters Local 657 in Windcrest said the lack of resources at NLRB could hurt organizing drives and slow the processing of labor board charges. In addition to processing petitions, the agency conducts union elections, oversees collective bargaining and probes potential labor law violations.

The NLRB receives about 20,000 to 30,000 charges per year from employees, unions and employers, covering a range of unfair labor practices, according to its website. NLRB agents must investigate each of those, and a 57% rise in union election petitioning in 2022 has increased processing time for the agency, unions warn.

“[As a result,] the employer has more time to try to intimidate the employee,” Perkins said.

In San Antonio alone, Starbucks workers continue to organize, and the NLRB also is overseeing the bargaining efforts by workers at nonprofit arts group SAY Sí.

One of those charges involved a union member that was terminated without notice the day before Thanksgiving, according to Ramos. She said the union has reason to believe he was fired illegally for his outspoken support of labor.

Twenty other employees at Jolt Action — which maintains other offices in Austin, Houston, Dallas and San Antonio — have left over the past six months, she added.

“We have been told our claims could take from six months to a year to get heard," Ramos said. "There has been a major push for unionization, which is good, but for workplaces that need the help and support, this is just an added struggle to getting fair treatment."

Greg Gamez, business manager for the International Union of Elevator Constructors' San Antonio local, said the NLRB's lag times are blow to efforts to boost wages at a time of record inflation and wage stagnation.

“This is not just about unions. It’s about an American worker," Gamez said. "When union pay increases, so does other private sector pay — to compete with those jobs."

Gamez — who has written to Texas elected officials on the issue — said backlogs will continue to increase with furloughs and underfunding.

At the San Antonio local for the American Postal Workers Union, President Alex Aleman said he’s concerned for fledgling unions in the South that already face the challenge of being located in a right-to-work state.

“It would have a bigger effect on newer organizers at places like Starbucks and Amazon,” Aleman said. “People in San Antonio need better wages and better lives so they can stay here.”