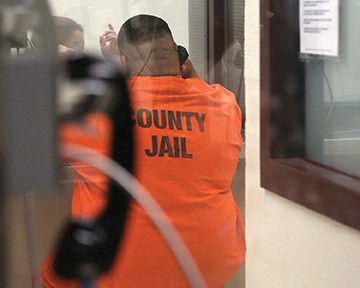 Courtesy
The Bexar County jail fills up with visitors who wait as many as eight hours to see inmates.

Bexar County's seven-story Adult Detention Center Facility is 26-years-old and provides visitation booths for inmates on three of those floors.

Families with loved ones waiting trial or who are serving sentences for minor crimes can visit on Monday and Tuesday, and if children are brought, families can only visit on Saturday and Sunday. Social service agencies, attorneys and ministers can visit on Wednesday.

And the lines are long — with people waiting anywhere from six to eight hours.

On July 7, the Bexar County Commissioners Court approved approximately $6 million in funding to pay the jail's phone-service provider ICSolutions for the installation of video-visitation technology and to finish construction at a re-entry facility where services will be provided to people transitioning back into society in an effort to reduce recidivism.

Instead of waiting at the jail for a non-contact in-person visit, people will speak to family members who are in jail using video-visitation technology from the re-entry facility. Inmates will be able to connect via a live link inside housing pods.

Courtesy
Long lines to visit inmates at the Bexar County jail could be a thing of the past.

The new technology will increase visitation opportunity for inmates by 250 percent, according to Bexar County Sheriff Susan Pamerleau, who said her goal is to reduce lengthy wait times.

"I'm more concerned about people who have to wait outside for lengthy times than I am for how a lot of people portray the value of video visitation, that it cuts down on contraband and it increases security," Pamerleau told the San Antonio Current. "When I've walked through and seen individuals who are waiting on their loved ones, it's not a pleasant experience."

"The most vulnerable and most emotional time during visitation is when that 20 minutes is over and we have to move that inmate back to their housing unit," Pamerleau said. "That is the time where they are most vulnerable to assaults on officers."

Despite the major change, current programs that allow contact visits for some inmates will remain and, according to Pamerleau, video visitation will positively effect inmates who don't currently have non-contact in-person visitation.

If everything goes according to plan, the new policy becomes reality after the first of the year in 2016.

"We're going to expand from five days a week to seven days a week, 10 hours a day for video visitation," Pamerleau said. "People can make online appointments and show up 15 minutes before. How is that not better?"

About the only thing that Margarita McAuliffe sees eye-to-eye on with Pamerleau is that visitation lines at the jail are long.

McAuliffe, who has a family member that has cycled in and out of the jail, said video visitation should not replace in-person non-contact visits.

"I can tell you, I have been there to visit a family member and I've also visited people without any family," McAuliffe said. "I've also had phone conversations in addition to the window visits. When you go to the jail and you see somebody you love and care about, you want to know how they look. Are they pale? Are they healthy looking? Are they thinner? That's a huge concern, particularly for a mother or a parent."

McAuliffe, who is quick to praise Pamerleau for her work since winning election in November 2012 said video visitation should be a supplement to in-person visitation rather than a replacement.

"Video chat will further isolate people who are kept there. It's dehumanizing," McAuliffe said, adding that to her, the long waits to visit her family member were worth it.

Diana Ibañez, who has a family member in prison, not county jail, agrees with McAuliffe.

"On July 4, we spent that day outside (of the jail) speaking to moms, dads, brothers and sisters," Ibañez said, testifying before Commissioners Court on July 7. "We asked about that and in about three-and-a-half hours, we had 250 people who said we don't want video."

Josh Gravens, a Soros Justice Fellow, spent three-and-a-half years in the Texas Youth Commission — a prison for children. When he was 12-years-old, he had sexual contact with his younger sister. Gravens is an out-spoken advocate for reforming the Lone Star State's policy of placing children on the sex offender list.

"As a kid, I went to prison. The environment in there, you are depraved of contact from family," Gravens said. "Just seeing someone from the glass and putting your hand up there makes a positive difference for inmates. You cannot do that with video visitation."

Taking that away for inmates who haven't been convicted of a crime because they can't bond out or are awaiting trial isn't right, but even more, it punishes families, Gravens said. In his view, the county is placing budgets over families.

"This policy is probably one of the most anti-family policies that exist and it's all driven by budgets," Gravens said. "I would challenge the sheriff to operate through video, have staff meetings through video and see family through video."

"There should be both kinds of visitation and they should definitely not eliminate face-to-face visitations for a couple reasons," Claitor said. "One is that most people, or a lot of people, don't relate as well to a video image, especially children. It's very important for children to be able to see their parents and know they're OK."

Secondly, technology can be flawed and Claitor said she's seen instances across the state where images and sound are flawed and visits are cut short when the system fails.

"This is a constant problem with their visitation and it causes an enormous amount of alienation and anger on part of the families," Claitor said. "And, as the research shows, visitation is an extremely important indicator on whether people recidivate. It's a very important part of incarceration whether it be jail or prison."

Emily Ling, project coordinator with the Texas Jail Project, said Bexar County families who have contacted the organization aren't in support of the move.

"The families feel like they are being treated as criminals too," Ling said.

Courtesy
No more: Visitors to Bexar County jail in the future will talk to inmates through a new video system.

In the last legislative session, Texas passed House Bill 549, which requires two 20-minute in-person visits per week. An amendment to the bill excludes jails that are already built or that are under construction without in-person visitation capabilities.

Bexar County successfully lobbied for exemption because it had spent $470,000 on planning and architectural design.

"Often, inmates need to be seen and talked to to be encouraged to do the right thing — told to cooperate, get back to work, and get back to your family," Whitmire said ahead of the vote, the Tribune reported.

Pamerleau said she's spoken to Whitmire and wants him to come to Bexar County.

"I've already invited him and will formally invite him to come see our operation and see why it is a good thing, not a bad thing," Pamerleau said. "I would hope in 2017 we can have legislators educated sufficiently that they understand this is a good thing beside that it's an unfunded mandate, because this would have cost us close to $12 million to provide that amount of visitation."

Bexar County Judge Nelson Wolff, speaking after both Ibanez and McAuliffe testified before the Commissioners Court on July 7, offered his support to Pamerleau and said the county has done more than it's ever done to rehabilitate people.

"We created four drug courts, DWI courts, mental health courts, veteran courts in the last 14 years in an attempt to help people rather than incarcerate. When I came here, 4,700 people were in jail and today it's 3,700 in jail despite more people," Wolff said. "I think we've done more than any to help people rather than just simply incarcerate them."

However, McAuliffe and co stand steadfast and won't give up advocating for both in-person non-contact visits and video visitation.

"I think there is a change in attitude (nationally). President Obama just visited a prison. The Legislature passed HB 549," McAuliffe said. "We're rethinking the way that we've been treating people who are incarcerated and this is a step in the absolute opposite direction for the rest of the way the country is going."