Sens. Cornyn and Cruz both vote to block a commission to probe the January 6 insurrection 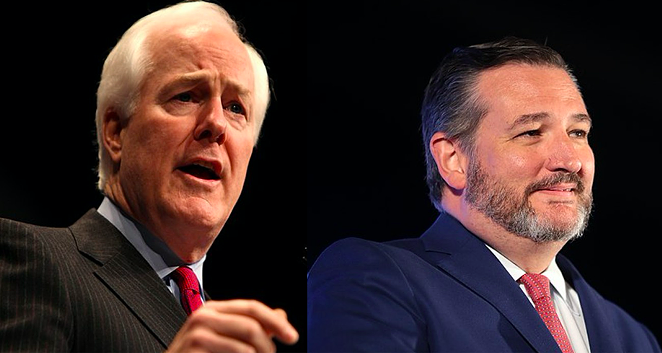 Wikimedia Commons / Gage Skidmore
John Cornyn and Ted Cruz were among the 35 U.S. Senators who voted to create a 9/11-style commission to investigate the Capitol insurrection.

Both of Texas' U.S. Senators threw in with their GOP colleagues and voted to block the creation of a bipartisan commission that would investigate the deadly January 6 Capitol insurrection.

Friday's 54-35 vote effectively crushes hopes for a bicameral probe since it fell short of the 60-vote requirement to break a filibuster. A proposal to set up the commission, modeled after the one that investigated the 9/11 attacks, passed the Democrat-controlled U.S. House last week.

It's little surprise Cruz voted against the measure. The senator spent the weeks preceding the attack on the U.S. Capitol by a mob of Donald Trump's supporters making false claims that President Joe Biden had stolen the election and led an attempt to block its certification by Congress.

On the other hand, Cornyn as recently as February publicly called for the creation of a commission like the one he ultimately voted against.

"I agree w/Speaker Pelosi — a 911-type investigation is called for to help prevent this from happening again," the senator tweeted on February 13.

The 1/6 attack on the Capitol was horrific & appalling. Those who planned & participated in the violence that day should be prosecuted to the fullest extent of the law. I agree w/Speaker Pelosi – a 911-type investigation is called for to help prevent this from happening again.

However, during a Thursday interview with Spectrum News, Cornyn was singing a different tune. Even though the 10-member commission would have included an equal number of Republicans and Democrats, he accused it of being weaponized by Pelosi, a popular target for the GOP base.

“Unfortunately, since the idea of a 9/11 type commission was originally floated, it became clear that Nancy Pelosi was going to try to politicize it and use it as a political weapon,” Cornyn told the cable network.

Cornyn's flip-flop comes after Senate Majority Leader Mitch McConnell reportedly urged members of the body to shut down the legislation as a "personal favor." It also follows Trump himself urging GOP lawmakers not to "approve the Democrat trap of the January 6 Commission.”

Cornyn has long pledged fealty to McConnell, and showed little taste for standing up to Trump, even during some of the former president's most egregious affronts to democratic norms.

In a statement shared with the Texas Tribune, Cruz called the insurrection a "dark moment in our nation's history" but said he wouldn't support a "politically motivated January 6 Commission led by Sen. [Chuck] Schumer and Speaker Pelosi."

The "no" votes by Cornyn and Cruz came a day after family and friends of Capitol Police Officer Brian Sicknick, who was slain during the mob attack, met with Republican senators to urge them not to shut down the bill.

“Why would they not want to get to the bottom of such horrific violence?” Sandra Garza, the late officer’s partner, told members of the media afterward. “It just boggles my mind.”