So Long, 'Slingers: An Oral History of the San Antonio Gunslingers 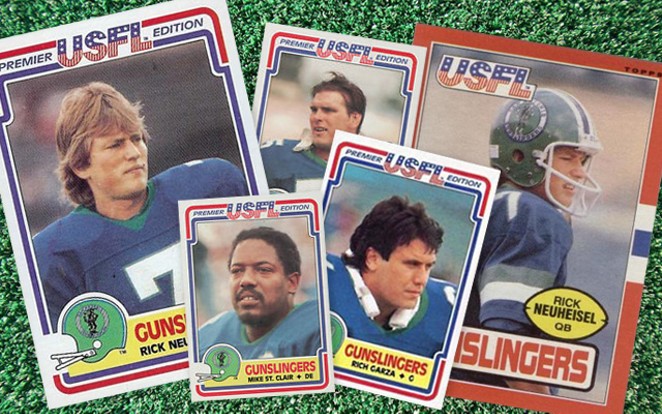 Those headlines you read about the Raiders flirting with San Antonio are nothing new. The movement to bring professional football to San Antonio is old news — and for a brief period 30 years ago, it even succeeded. Kind of.

The San Antonio Gunslingers, a bona fide pro ball club in the United States Football League, played at Alamo Stadium in 1984 and 1985. The short-lived league played its games in the spring and boasted NFL stars such as Herschel Walker, Steve Young and Reggie White.

The Gunslingers never owned a winning record and landed near the league bottom in average attendance both years. The 1985 season was especially tumultuous — the Gunslingers' eccentric oil baron owner Clinton Manges quit paying the team's bills for the last month of the season, including player and coach salaries. The team played out the year but dissolved before its third season.

Despite that, the coaches and players who the San Antonio Current caught up with looked back at their time with the Gunslingers fondly. Here's what they remember: 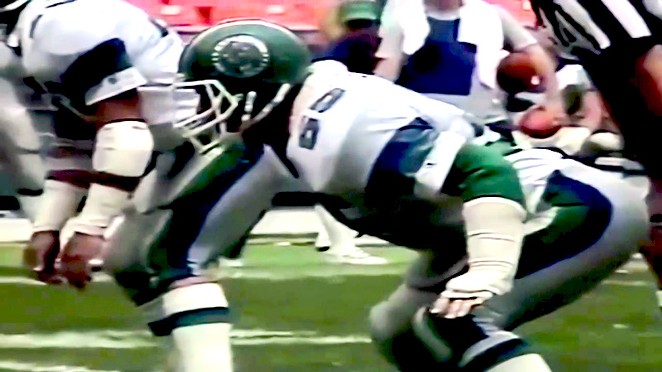 Bill Bradley, defensive backs coach and assistant to the general manager: I don't think anybody would ever call that group of guys "ragtag." Underdogs, characters, colorful. Guys who got off of teams for disciplinary reasons. Not drugs. Well, maybe some with drugs.

Peter Raeford, defensive back: I came to San Antonio with $80 in my pocket, just on a wing and a prayer. I just wanted to make the team, I wasn't worried about starting. But I ended up starting ... and made First Team All-USFL. It was a just a dream season.

Current: There were few marquee names on the Gunslingers, with the exception of Rick Neuheisel, a former quarterback at UCLA who won MVP at the 1984 Rose Bowl.

Tommy Roberts, running backs coach: Rick was extremely intelligent. He was like any QB — we had to make him run the ball. He wanted to throw every time, but show me a QB who doesn't.

Current: Manges, the team owner, was the prototypical Texas hustler. He made a fortune in the oil patch, as well as powerful friends and adversaries among Texas' ruling class. But his wheeling and dealing caught up to him. In 1991, federal marshals seized his massive South Texas ranch, named Magic Kingdom, to pay off his debts. He was sentenced to over two years in prison in 1995 for mail fraud. Manges died in 2010.

Bradley: Part of my job was to sign people up for season tickets. People would say "Is that that team that Clinton Manges is going to own?" We'd say "Yes." So they'd say "Well, then I don't want any season tickets."

Roberts: Clinton Manges, you either loved him or hated him. There was no in-between with him. I was on the love side.

Bradley: I would have to say Clinton was a maverick oil man, and a maverick business man. He did a lot of things his way. He was a tremendous salesman and a great talker and was well-connected in South Texas, from San Antonio down to Freer. Not always on the up-and-up.

David Knaus, defensive line coach: He wore a diamond around his neck that would choke a horse. I remember he had a thing for Taco Cabana. Whenever we went on the road we would load up our charter flight, there was a lot of good food on those charter flights, but he was insistent on having Taco Cabana fajitas and guacamole on our charter flight.

Bradley: To have [a game] on TV, you had to have seating for about 26,000 people. But [Alamo Stadium] only sat about 20,000. And so Clinton bought about 6,000 extra folding chairs — really nice metal folding chairs. He had them painted Gunslinger blue and green, and he'd set them out near the end zones. No one ever sat in them. Big Chief, the guy who ran the stadium, he'd take them out of the box and set them all out, then when the game was over he'd store him underneath the stadium. That was Clinton Manges.

Mike Hagen, running back: The lockers were underneath Alamo Stadium. They were terrible. You had your locker and that was it. You were kind of on top of everyone. I'd compare them to a middle school locker room.

Roberts: I thought Alamo Stadium was a nice stadium. Now on the Monday Night Football game against the Houston Gamblers the lights went out and caused an hour delay, that's true.

Hagen: You go to San Antonio, you're on ESPN, Monday Night Football, and the lights go out. It didn't look really good I don't think, but it all worked out. They had that happen at the Super Bowl.

Knaus: There were some parts of management that didn't understand the inner workings of pro sports, like equipment. When we said "We need this amount of 16 millimeter film." They said "You film practice?" One of the main people in the front office didn't realize that we didn't have to provide game helmets to the opposition, that they would bring their own helmets.

Current: But by the last month of the 1985 season, equipment was the least of the Gunslingers' worries. Manges was deeply indebted, much of his oil business had dried up and he quit paying players and coaches, passing out IOUs instead.

Roberts: We pulled up at the airport, I believe it was in Jacksonville, and (Gunslingers linebacker) Rich D'Amico was right in front of me. He's a big old boy, and limos pulled up to the plane to pick up ... Clinton and the guys up at the front of the plane. I thought (D'Amico) was going to destroy something. I said, "D'Amico settle down." He said, "Look at this, he's not paying us and he's driving a limo." I said, "Don't worry about it, he's not paying them either."

Mike Ulmer, defensive back: There toward the end when the finances were getting tough, that's when you wanted to have a fast car, because right when you got your check, you tried to get to the bank as fast as possible. I think (Gunslingers defensive back) Jim Bob Morris had the Camaro, and he had the advantage.

Rich Garza, offensive lineman: I really didn't get caught up in all that stuff. I was a single guy, I was all tunnel vision about playing ball. I was making a good living. A lot of this stuff is fabricated. Running to the bank with your check? I never did that. Maybe some guys did. My check never bounced.

Ulmer: It would get a little tense in the locker room. I remember one game, a televised game, we asked, "Do we even go out and play or not?"

Hagen: There was a big thing about we were going to make a stand. Some of the guys wanted ... to not play unless we got paid.

Juan Castillo, linebacker: There's some guys that were pretty good players. Everyone understood that ... if you did well there, you might have a chance to go in the NFL.

Raeford: With the risk of getting injured, and deciding to go ahead and play, that was something that was a scary situation. I remember I bought my first vehicle not knowing if I was going to be able to make the payments. I bought it off the showroom floor, it was a 1984 Mazda RX-7. I was excited to get it, but

then after not getting paid I was like, "Oh no, I don't know if ill be able to pay for it."

Hagen: We went out those last couple games and we played hard. You couldn't tell we weren't getting paid.

Bradley: It all kind of put us together for one cause: To get our money and to play great football. And that's what we did! I wouldn't trade in those years.