The migrant survived on scraps of food left behind by customers, according to the report. 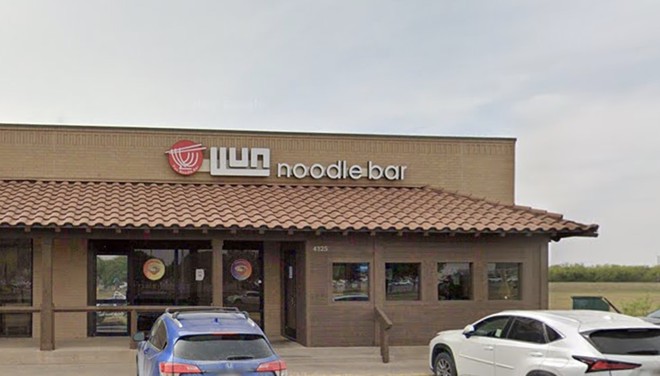 Google Street View
Javier Castro-Rodriguez, a Honduran migrant, was forced to work shifts of up to 12 hours without pay, according to TV station KTAB.
A Texas restaurant owner is behind bars and accused of human trafficking after allegedly purchasing a migrant and forcing him to work as slave labor, West Texas TV station KTAB reports.

Hai Zhuang, owner of Fun Noodle Bar in Abilene, is accused of buying Javier Rodriguez-Castro, a Honduran migrant who entered the county in January 2021, according to KTAB. The restauranteur was arrested Wednesday, police told the station.

Rodriguez-Castro told investigators he was first transported to a smuggler's stash house, where his passport was taken away, KTAB reports. The migrant then ended up at the noodle shop, where Zhuang allegedly handed over large bills to the smuggler, according to the station.

The migrant was reportedly told he would be paid $2,000 a month and provided food and housing. However, Zhuang failed to meet those promises, according to KTAB.

Instead, Rodriguez-Castro lived as an indentured servant, being shuttled back and forth between the restaurant and the stash house in a white van, according to allegations reported on by the station.

Besides being barred from leaving the house, Rodriguez-Castro was denied restroom breaks and often worked shifts that lasted up to 12 hours, KTAB reports. He survived on scraps of food left behind by customers and sometimes received beatings from Zhuang, according to the news story.

Castro eventually escaped to Dallas in the summer of 2021, where he recounted his experience to the Texas Attorney General's Office's Human Trafficking Unit, according to KTAB.