UIW Statue Gets National Attention Thanks To Feminism And Twitter 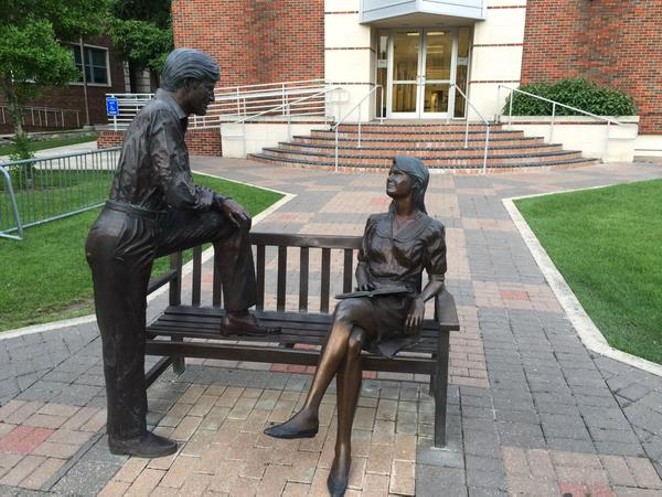 saddiego/Twitter
Meet "Mansplaining The Statue."
A statue on the campus of the University of the Incarnate Word got a profile in the New York Times after it went viral on Twitter this past weekend.

The bronze statue is called "Classmates," and was sculpted by SA artist Paul Tadlock, according to the Times. But it's now known as "Mansplaining The Statue," thanks to people on the internet who are so over all the patriarchal bullshit.

A friend spotted this in Texas: #Mansplaining The Statue. pic.twitter.com/87RkAkuLcI

The image was originally posted Cathy De La Cruz, known as @SadDiego on Twitter, who aimed to mock the phenomenon of when a man feels the need to condescendingly correct something a woman said, even when the woman has more knowledge of the topic at hand. (Ladies, you know what I'm talking about.)

The tweet took off, getting a boost when it was retweeted by feminist writer Ann Friedman, prompting a flood of reactions of photos depicting other "mansplaining" statues on display around the country.

Read the Times profile for the story behind the statue and its repurposed interpretation. Some highlights: the female on the bench is the sculptor's daughter, and the work is supposed to depict collegiate camaraderie, but even Tadlock sees how people can take the feminist interpretation.

“That’s generally the case. The ladies know more. Because guys, young guys particularly, love to tell everything they know to impress the girls, and the truth is most of the girls know it already,” he told the paper.

Here is a selection of the more amusing reactions toward the original tweet. And men, if you feel the need to mansplain in the near future, don't. Just don't.

@annfriedman @SadDiego add in that he's trying to take up as much bench as possible, and she's cornered...

@annfriedman @SadDiego Sometimes I wish I were this mansuasive, but I don't want to offend anywimmin (or step on any benches).

@annfriedman @saragoldrickrab @SadDiego I wonder if someone could adjust it so she's kicking him in the balls?

@annfriedman @AdamSerwer @SadDiego & the plaque at it's base says, "Let me tell you a little bit about that book you're reading, sweetheart"

@Matlock2xl @annfriedman @AdamSerwer @SadDiego She has the faintly rapt expression of a female schooled to act interested in what men say.