It wasn’t easy to narrow the list down to just 15, but we gave it the ol' college try. 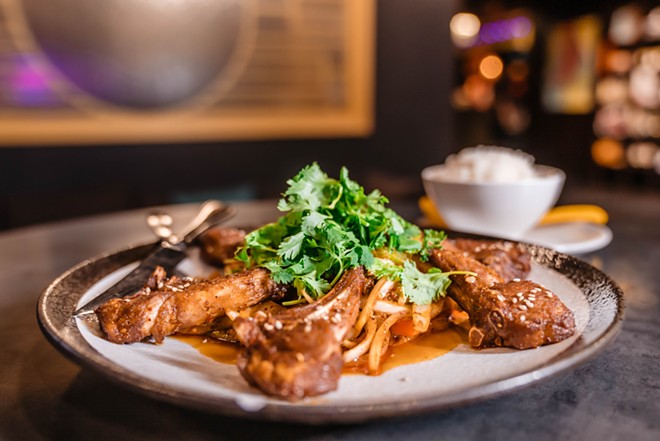 Adah Esquivel
Dashi's Signature Lamb Chops are a must-try, take our word for it.
We recently became acquainted with the term “culinary bucket list,” which is exactly what it sounds like: a collection of dishes that foodies owe it to themselves to try before they die. Here’s a list that, at least for 2022, sums up those dishes on offer in San Antonio. Given the amazing growth of the city’s culinary scene, it wasn’t easy to narrow the list to a manageable 15.

We all have friends who claim to loathe lamb — you may even side with them yourself. But lamb is at home in many culinary cultures, and it’s well worth getting to know. One good way to ease into the meat is through one of its most tender and mild cuts: the chop. The Signature Lamb Chops at Dashi are an approachable introduction: just spicy enough, redolent of cumin, garlic and ginger — and accompanied by onion and bell peppers. The dish will win over even the most skeptical. Once convinced, you may even want to move on to Dashi’s version No. 2, seasoned with “numbing” Sichuan peppercorns. 2895 Thousand Oaks Drive, (210) 562-3343, sichuandashi.com. 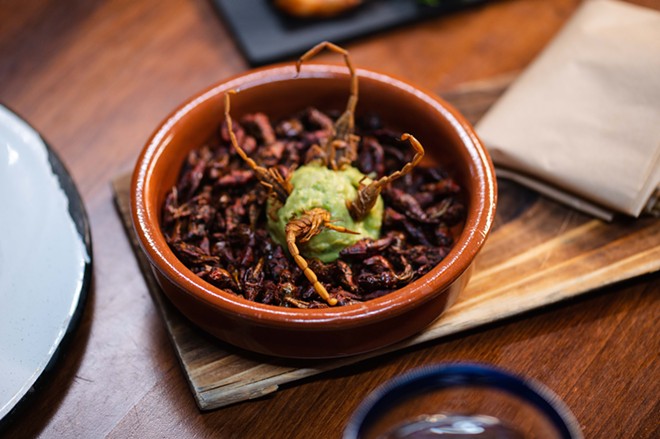 In the minds of most, bugs are for squashing or swatting. But many cultures find them perfect for frying and eating, and in a world with an expanding population and diminishing resources, we may all have to come to the same conclusion. Cuishe Cocina Mexicana is a great place to begin an entomophagous journey. The bugs, or bichos, in question may include crickets and tiny scorpions, but they come served with a scoop of excellent — and, perhaps more importantly, familiar — guacamole and tiny tortillas for crafting tacos that are both creamy and crunchy. The brave may also choose to add chinicuiles, or red agave worms, for an upcharge. A shot of mezcal is recommended for both courage and costumbre. Multiple locations, cuishemx.com. 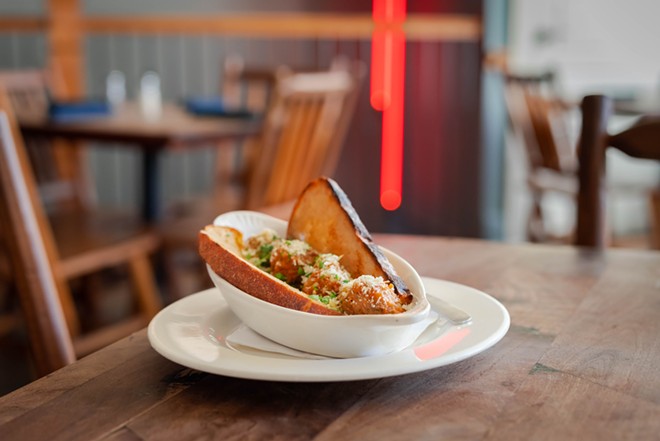 There’s no argument that Southtown standard Liberty Bar excels in many arenas, but the word “cozy” may encompass all of them that matter. Aside from the warmth of the historic multi-level building the eatery calls home, the iconic pink spot also offers up a menu of comforting eats that are at once whimsical and hearty. A favorite example is the meatballs, which are crafted from a blend of ground beef and lamb. The quartet of golf ball-sized orbs are served in a piping pool of house-made red sauce, sprinkled with parmesan cheese and accompanied by garlic sourdough toast made onsite. The dish is hearty enough for a solo lunch, but could also be shared — if that’s your inclination. 1111 S. Alamo St., (210) 227-1187, liberty-bar.com. 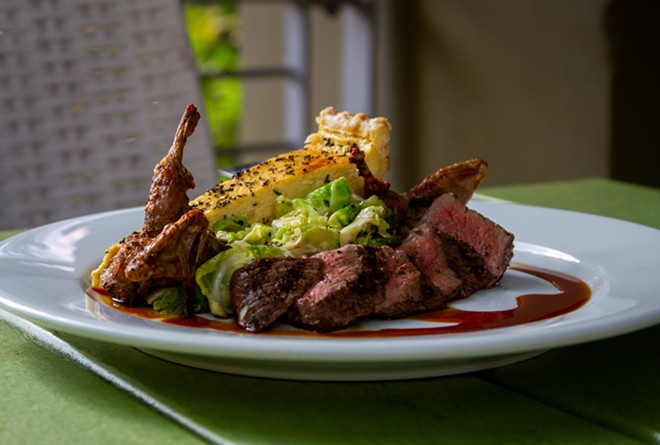 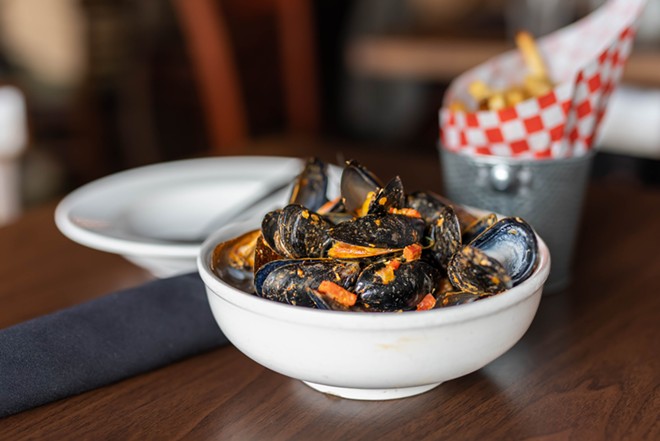 Belgium has a good claim on being the country of origin for “french” fries, and La Frite does an especially good job of turning out paper cones of the potato that conquered America. The point here, though, is to have them with moules, or mussels, another product of which Belgians are especially proud. There are seven different versions at La Frite, of which Marinières — white wine, cream, shallots and garlic — is the undisputed classic. Have these first. Then feel free to graduate to, say, a Thai version with red curry and coconut milk, another Asian iteration with sake, ginger, garlic and scallion or even a Basque rendition with Spanish chorizo and various smoked chiles. It’s all but obligatory to at least consider a Belgian beer on tap, though a bottle of Muscadet or Sancerre wouldn’t be a faux pas. 728 S. Alamo St., (210) 224-7555, lafritesa.com. 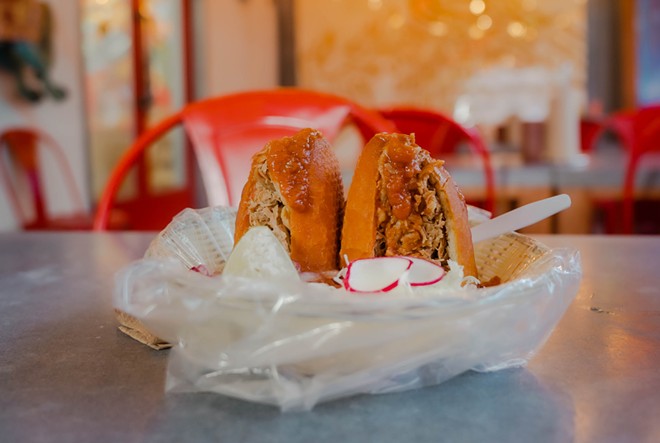 It starts out like a sandwich but finishes almost like a soup,” Ro-Ho chef-owner Jorge Rojo once said of his initially unfamiliar but now deservedly popular “drowned” torta. Yes, it’s supposed to get soggy. This classic from Guadalajara starts with puerco — you can get pork butt, pork carnitas, pork or a mix of all three — tucked into a birote bun that’s been sliced and slathered with refried beans. It’s all then doused in a mild but flavorful tomato sauce that may have encountered a little chile de arbol. If it hasn’t, add some. Garnishes including sliced cabbage, pickled onion, radish and lime wedges add a fresh touch of brightness. As you eat, the bread will begin to dissolve into the sublime “soup” Rojo mentioned. A side of avocado or guacamole wouldn’t be a mistake, nor would a frosty cerveza. 8617 N. New Braunfels Ave., (210) 800-3487, ro-hoporkandbread.com. 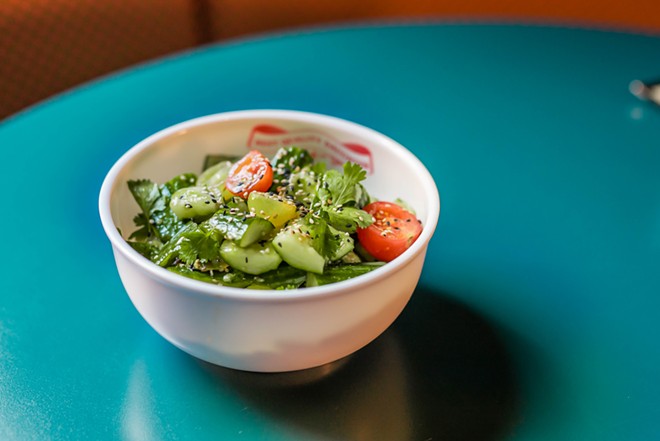 This Pearl-adjacent Asian-American fusion spot is known for its whimsical interior design, replete with pink details and gilded accents. However, one menu item proves one universal truth that no matter how cute you are, sometimes you just need to smash some shit. Enter Best Quality Daughter’s Smashed Cucumbers, with juicy heirloom tomatoes, sesame garlic dressing and cilantro. A starter this complex and umami-riddled threatens to punch you in the face, but trust us when we say it’ll have you coming back and saying, “Thank you chef, may I have another.” Try adding a side of Thai chimichurri for an extra layer of flavor. 602 Avenue A., (210) 819-4236, bestqualitydaughter.com. 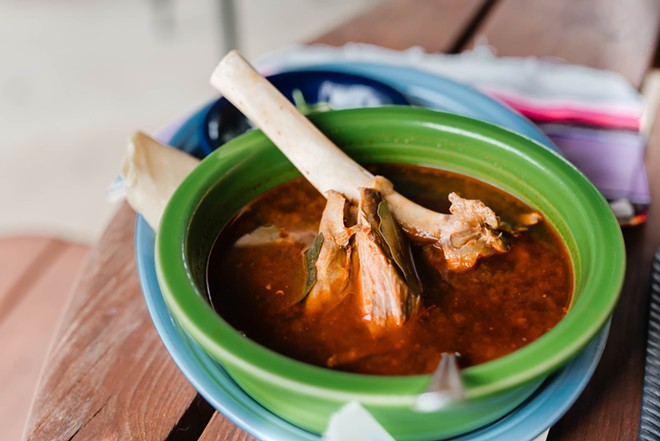 Surely, you remember the birria frenzy that overtook San Antonio a couple of years back. We got goat, lamb and beef variations of the savory stew, even taking it so far as to turn the hearty meal into griddled quesitacos and quesabirria with caldo for dipping. Fad or not, the original goat version is always worth a revisit, and Southtown’s Cascabel delivers a delectable version. The spot’s diminutive interior is decorated with arty responses to the more-Mex-than-most cuisine, and the shady patio is great in appropriate weather. The birria is a sultry broth featuring shredded chivo, or goat, sparked with a cascabel chile sauce. Accompaniments include cilantro, chopped onion and lime plus house-made corn tortillas. 1000 S. St. Mary’s St., (210) 212-6456, cascabelmexicanpatio.com. 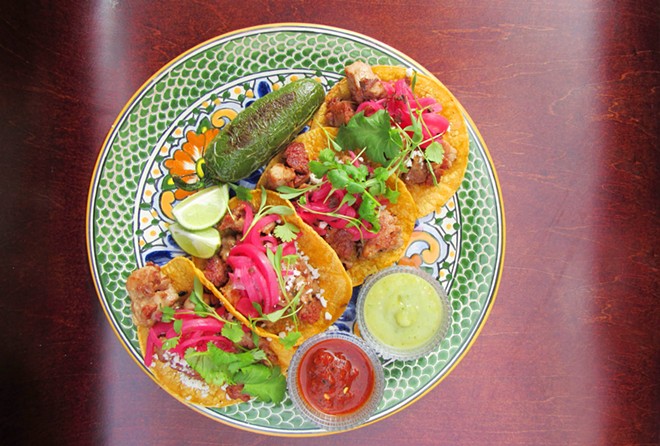 Nina Rangel
Tacos de Mollejas at Milpa at the Yard

Mollejas, or sweetbreads, may be not so much maligned as misunderstood by most of America. Technically, they can be the pancreas or thymus gland of a cow, but who needs to dwell on the origin of something so delicious? San Antonians of a certain age have the advantage here: they might well remember the crispy-yet-creamy mollejas a la plancha served up by the legendary Mario’s, a long-gone restaurant located where UTSA’s downtown campus now stands. Others should head straight to Milpa where chef Jesse Kuykendall fries their version of mollejas for stuffing into corn tacos, best adorned with a splash of unabashed salsa roja or salsa verde. They’re a riot of tastes and textures that’s more than sufficient to banish any thoughts of provenance. 5253 McCullough Ave., (210) 990-2349, milpasabor.com. 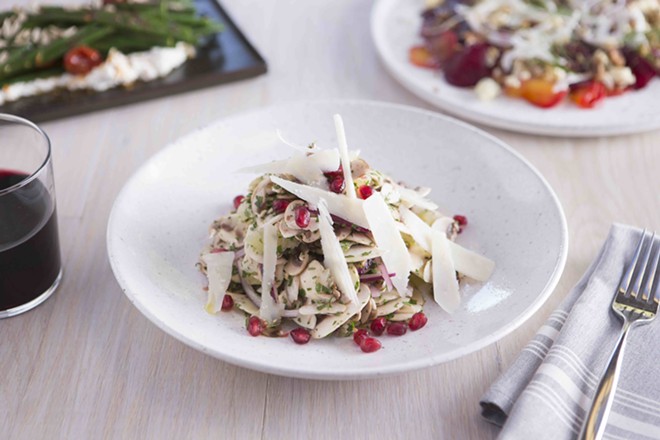 This salad is a lesson in less-is-more: a study in the perfection possible with prosaic products. At first glance, the dish appears to be merely a mound of sliced mushrooms — white supermarket-style button mushrooms, at that. But look closer: the fungi are sliced almost paper-thin. So, too, the red onion and radish that add crunch and bite. There are flecks of flat-leaf parsley for contrast, and a whiff of citrus to counter the faint aroma of forest floor. A modest film of extra-virgin olive oil plays against the salad’s lemony acidity and a scattering of pomegranate seeds provides bursts of tart flavor and sparks of jewel-bright color. And then there’s the final touch: before leaving the kitchen, the chefs shower it all with delicate shavings of pecorino Fulvi, an origin-protected sheep’s milk cheese produced north of Rome and aged for a minimum of 10 months. Ordinary mushrooms perhaps, but an extraordinary result. 2195 N.W. Military Highway, (210) 503-5121, clementine-sa.com. 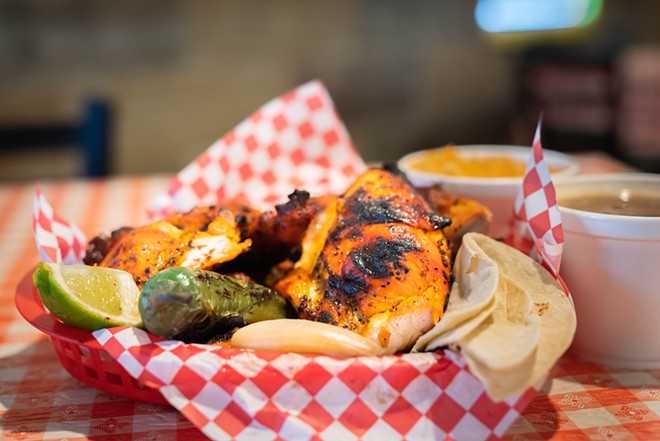 On your way into Pollos Asados, you’ll likely pass by an aromatic armada of sizzling chickens, orange-hued with a colorful secret marinade. This is a great introduction to things to come once seated inside the restaurant’s bustling and boisterous original location on Rigsby Avenue. You can order either a whole or half chicken, and it will come to you with skin that’s burnished and blissfully fatty, accompanied by a steamy grilled onion, grilled jalapeño, red and creamy green salsas, lime and fresh corn tortillas. Put a little bit of everything into a tortilla and liberally squeeze that lime — it’s there for a reason. Multiple locations, polloslosnortenos.com. 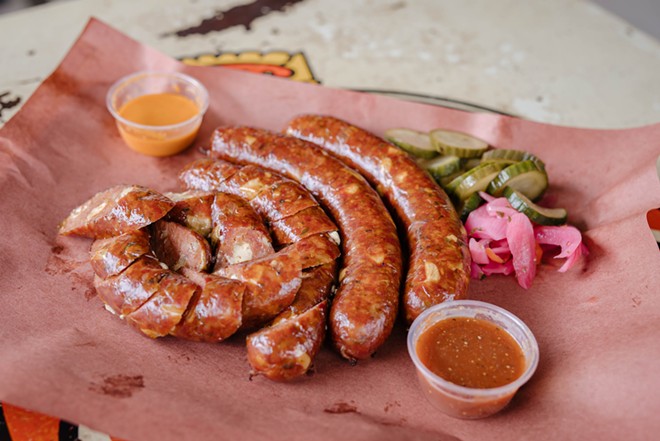 Helmed by brothers Nick and Elliott Reese, the eponymous Reese Bros Barbecue is one of the newest pits in town. Despite limited opening hours, it’s already garnered plenty of praise for its brisket, smoked turkey and thoughtfully tweaked sides such as a poblano-inflected macaroni and cheese and a slaw strewn with fresh pea shoots. The Reeses also prepare their own tortillas, just one indication of the Mexican traditions that influence their otherwise totally Texas barbecue. Another nod to Latin American flavor is the house-made sausages, the most frequently available of which appears by the link with Oaxaca cheese and serranos, a hint of comino plus a touch of powdered red chile. There’s just enough cheese, and just enough heat. 906 Hoefgen Ave., (512) 925-9205, reesebrosbbq.com. 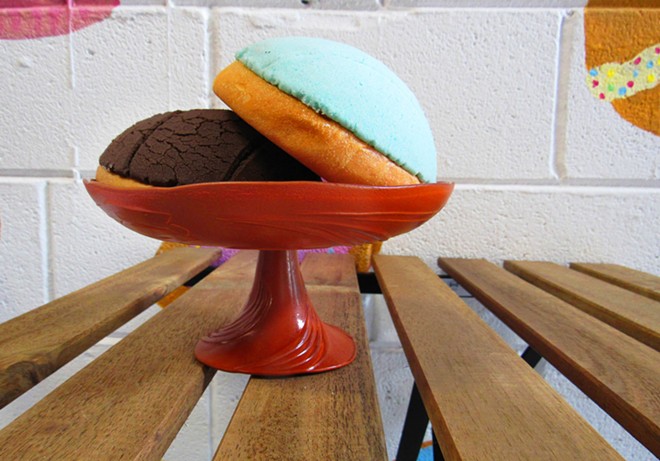 Many San Antonians have their favorite source for the iconic concha, and that’s all well and good. But we argue that Alebrije, a young mom-and-pop operation near JBSA-Fort Sam Houston, is worth at least one visit. The couple’s conchas impress first in their array of colors — soft coral, pale turquoise, sea-foam green — stretched tightly over the domes of the pastry and incised with scratches that evoke, but don’t replicate, the traditional shell pattern. But beauty is more than shell deep at Alebrije. The lightly sweet breads could easily stand on their own without the decorative overcoat. Fair warning: these may cost several times more than the ones from your corner panadería, but they’re worth it. At least once. 1931 N. New Braunfels Ave., (210) 551-1771, alebrijesa.com. 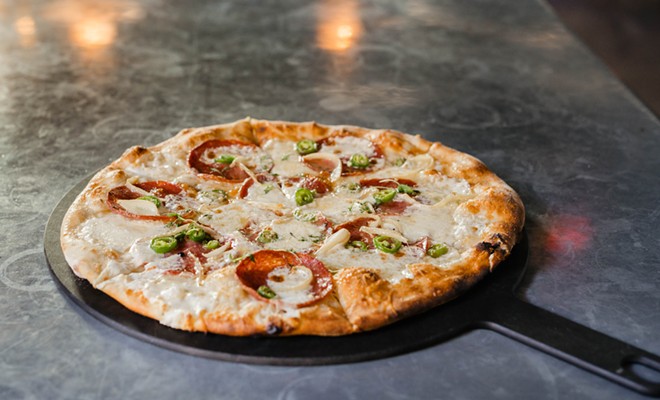 We could always do with a slice of expertly crafted pizza, but when it comes to inventive toppings and unexpected flavor combinations, we leave it to Blue Star Arts Complex staple Stella Public House to blow our minds. A staunch purveyor of local farms and small businesses, the eatery delivers on SA-grown tastiness with its Bee Sting Pizza. Slices of locally sourced onion and serrano peppers add a satisfying crunch to a pie blanketed with house mozzarella and large rounds of dry soppressata salami. It’s the addition of Grana Padano — a cheese similar to Parmigiano Reggiano — as well as finely chopped cilantro and a drizzle of local honey that elevates this offering to new heights. It takes advantage of your expanded sinuses to allow the nuances of sweet, spicy and unctuous flavors to mingle freely. 1414 S. Alamo St., (210) 277-7047, stellapublichouse.com. 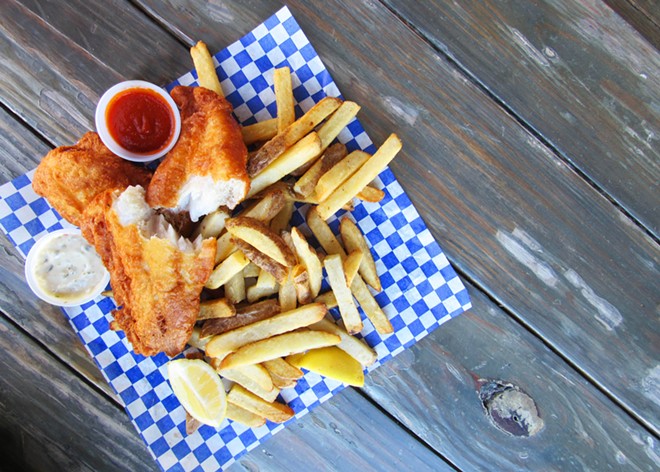 San Antonio transplant Matthew Rose offers up crisply fried fish and chips that will satisfy any craving for the undisputed national dish of Great Britain. The bloke is a British native, after all. Rosey himself posts up in his compact food trailer at several local drinkeries, including Tandem on the South Side and Black Laboratory Brewing on the East Side, doling out a simple menu of fish and chips, served in Styrofoam with packets of tartar sauce, ketchup and malt vinegar, the latter of which traditionalists should lean hard on when it comes to dressing the expertly fried chips. One is counseled to eat it on the spot, preferably with a cold beer. Locations vary, facebook.com/roseysfishandchips.