Rochow's work will be featured in the forthcoming exhiibition 'Common Ground' at Mercury Project. 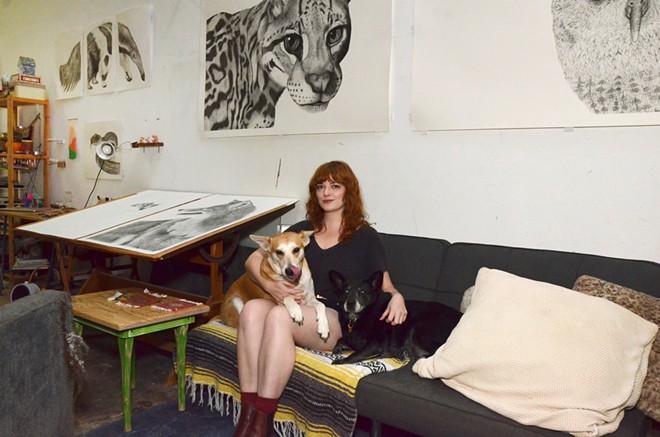 Born in Alabama but raised primarily between Massachusetts and Maine, Hilary Rochow has been an artist for as long as she can remember.

Indeed, she started selling her work in preschool, Xeroxing her drawings and making DIY newspapers she priced at a nickel apiece.

As a young girl, she grew frustrated with her inability to realistically recreate characters from the animated shows she watched on TV. However, by high school, she'd gotten the hang of representational drawing and routinely sketched convincing anime characters and otherworldly creatures to inhabit the fairytales of her own imagination.

These days, Rochow is becoming well known for her realistic animal drawings, which she painstakingly renders with felt-tip pens. What's lesser known is that her studious approach and pared-down style are informed by a winding path through studies in veterinary science and industrial design.

In anticipation of her upcoming show with fellow artist Hilary Jean at Mercury Project, we dropped into Rochow's Southtown studio to learn more about her process and her journey to now. The show, "Common Ground," opens Saturday, Jan. 21.

Although she took to art early, becoming a veterinarian had long been Rochow's professional goal.

"That had been my Plan A my whole life," she explained during our visit. "I wanted to study animal behavior and conservation, and ultimately work for a zoo."

But something shifted while she was studying pre-veterinary medicine as an undergrad at Auburn University in Alabama.

"I was enjoying the classes and doing well ... but there are some practices to becoming a veterinarian that weren't things that I wanted to participate in," she said. "I had a little identity crisis where I had no idea what I was going to do."

With encouragement from her father, Rochow investigated Auburn's industrial design program and found her footing there.

"It felt like home," she said. "I was like, 'Oh, these are my people.' I just hadn't realized that I needed to be looking for that."

She continued: "The real value of my education was teaching the design process. It's one that I found actually has a lot of similarities to writing as well as ceramics. There's this idea of killing your darlings and reaching a goal where, ultimately, you're trying to find a solution. And the solution might not be your heart's desire, but you have to make it good. And I love that process. ... There's a very specific style of sketching you learn in industrial design. You're not trying to make a beautiful composition, you're trying to create something that looks real — that looks like it can be held, if it needs to be held — and proportionate. ... And that's where I started sketching with pen and became comfortable with the boldness of the stroke, and the permanence of it, and how to use that to my advantage." 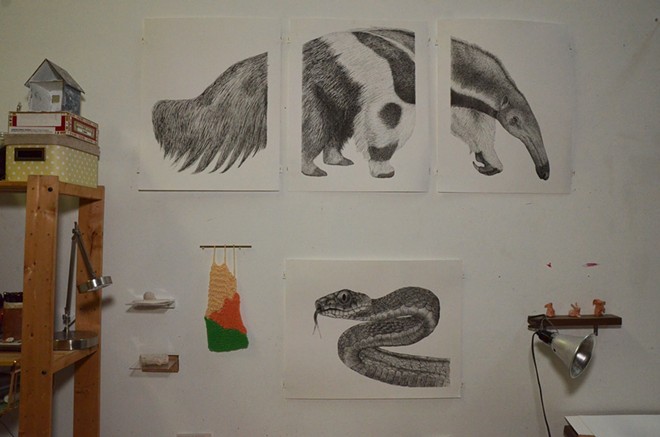 Bryan Rindfuss
Drawings of an anteater and a snake hang on the wall of Rochow's studio.

Two years after her 2016 relocation to San Antonio with a former partner, Rochow reached out to FL!GHT Gallery owner Justin Parr, who was looking for volunteer gallery assistants.

"I get weird when I'm isolated," Rochow said. "And I thought it would be a good idea to go have some socialization and talk to people. If I'm going to be working for myself, by myself, it just seemed like a really nice way to make some friends. ... I met him, and he was just immediately so welcoming."

"I had been doing drawings and I knew that there was value in that. But I had never imagined my work in a gallery," Rochow said. "I had started working on a much larger piece and I asked Justin, 'Is this something that could be a show?' And he said, 'Yeah, we don't have anyone for November. That's you now.'"

"It was so encouraging because I went into it without that expectation," she said. "I was basically just like, 'This is the work I've done. I like it and hopefully nobody's mean to me about it.' That was my expectation. And then people were just buying it left and right. It was surreal."

In 2020, Rochow secured a Southtown studio in the 1906 S. Flores arts complex and planned to open a gallery there that March. Although the pandemic complicated the schedule, Rochow's compact Rojo Gallery has since hosted impressive and diverse programming, including a soft opening showcasing women artists who work out of 1906 along with solo shows for Rachel Comminos, Rikkianne Van Kirk and Keri Miki-Lani Schroeder.

"When it comes to curating, I see it collaboratively," Rochow said. "And I see it as my job to help facilitate whatever the artist is trying to say — and to create a way that people can then approach the art in a way that helps the artists feel understood and seen. ... The biggest compliments I've gotten from different artists is, 'You helped me see my work differently,' or 'I wouldn't have done this with my work.' ... I try to be mindful of showing a diverse range of perspectives — and material as well. I think when you start looking for that, you kind of naturally find diverse people behind it. ... And so, it's work that resonates with me and people that I can connect with. And that has ended up being largely women and nonbinary folks, but I've shown men as well. ... I've really loved working with all of the artists I've had in the space." 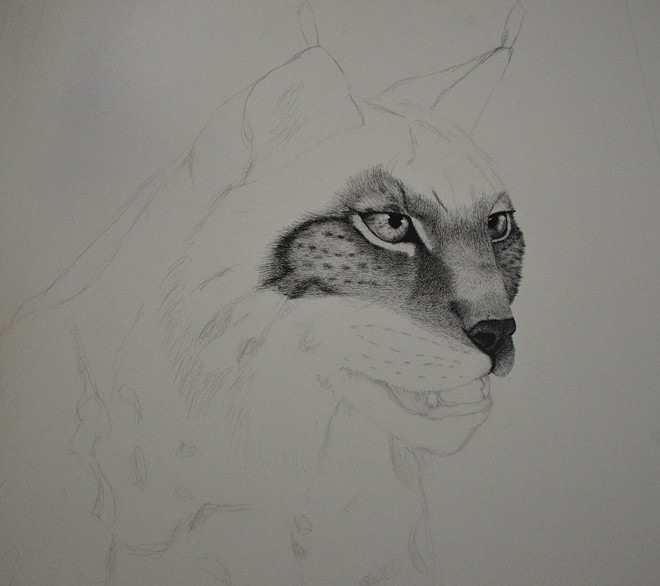 During our visit, Rochow was busy preparing for her upcoming show with Hilary Jean at Mercury Project. Curated by Sealia Montalvo and Crisa Valadez of the San Antonio collective Motherling and titled "Common Ground," the two-woman show employs monochromatic portraiture as its connective thread.

On a drawing table in the studio, a large in-progress portrait of a lynx opened a window into Rochow's unique — and often incredibly time-consuming — process. Working with multiple reference images, the artist sketches a pencil outline and typically starts inking the animal's eyes first.

"I'll usually have two main body poses and then a lot of detail poses, because a big part of it is the direction of the fur," she explained. "And I need to look at other images for the fur texture, the fur direction, the eye color, the nose texture. I'll pull in different images and cobble them together."

When the lynx is completed, she'll likely pair it with a coyote portrait of the same size.

"There's a similar feeling about them," Rochow said of the pairing. "The drawings that I do that aren't commissions are like low-key, subtle self-portraiture. It's not a self-portrait, per se. It's more like my emotional landscape at the time, because I'll feel connected to an animal, and an idea of an animal. And I think about an expression that I'm wanting this animal to have."

Although Rochow completes smaller drawings swiftly, some of her sizable works can consume up to 60 hours.

"With the larger ones, I kind of get into this state of hyper-focus and I need to just let myself be there," she said.

Perhaps unsurprisingly, she cycles through a lot of pens — fine-point Sakura Pigma Microns to be exact — and even labels them based on their age and flow.

"It's not just the size but also how juicy they are, how much ink has been used up. Once they get a little bit less-perfect line, I actually prefer that — it gives me a bit more control. So, I'll mark them with tape so I know it's not a fresh one and I can use it for white areas or to add shading where a delicate hand is needed."

When asked about pricing her work, Rochow grew pensive.

"I think that's a very interesting subject: the value of fine art," she said. "But I try to take into account that my materials are not expensive — it's not like I'm buying pounds and pounds of clay or metal or paint and canvas. My hours are very high, because of the time it takes to prep the whole thing and then to actually draw each individual tiny line to my exacting specifications. ... I try to balance the value of my time with the perceived value and the willingness of the market."

That balance can range from $80 for a tiny 2 inch-by-2 inch drawing to $3,500 for one of her 40 inch-by-60 inch "big boys." When it comes to commissions, Rochow works with clients' budgets and talks openly about pricing before putting pen to paper.

Reflecting on her process and her love of nature, Rochow uses quiet, slowed-down terms like "noticing" and "observing."

"It's such a nice space that my brain goes when I'm drawing — just putting the lines down and noticing," she said. "I really build relationships with this animal's anatomy ... and I want to facilitate that for people. I go to the river and I see all these beautiful things that live out there, and you miss them if you're going too fast and you don't stop to observe. That's the whole thing with nature: it's so easy to forget that we're connected to it. I feel like if we applied that kind of curiosity — and willingness to understand — to our world and the people around us, things would be a little bit easier ... and the world that we're in would be a little bit more compassionate. That's a very lofty ideal, right? I don't think any piece of art has ever changed somebody's life, but it might make someone think about something a little differently. And that's really my hope — that people see the observation that was put into [my work] and maybe start looking a little bit differently at the world around them, the animals they encounter, maybe take a little bit more time to do that. And like the relationships I build with the subject matter, the more you look, the more you notice."