J. Harrison Ghee on Kinky Boots and the Art of Drag

With lyrics and score by pop icon Cyndi Lauper, and a book by Harvey Fierstein, the Tony Award-winning musical Kinky Boots tells the story of an embattled shoe factory owner, Charlie Price, whose chance meeting with a drag queen, Lola, takes the two characters down unexpected paths. The San Antonio Current spoke with actor J. Harrison Ghee (who plays the lead role of Lola/Simon) over the phone in anticipation of Kinky Boots' six-day run at the Majestic.

Billy Porter originated the role of Lola on Broadway and won the Tony Award for Best Performance by a Leading Actor in a Musical. What were you able to take away from his performance?

I definitely learned from Billy that Lola is a big character. As long as you bring your truth and your honesty to the part, you can't fail. And I learned to be committed to living the Lola lifestyle full out.

It's living out loud and being bold, and really believing in people, and wanting to share love, and acceptance and unity.

In his memorable acceptance speech at the 2013 Tony Awards, Billy Porter credits Jennifer Holiday and the cast of Dreamgirls for igniting his own passion for musical theater. What are some of the performances that inspired you to become a singer and an actor?

I can remember as a child we had a video of a production of Porgy and Bess that I watched incessantly. Also my favorite movie of all time is The Wiz. So those are definitely movies that have inspired me to do this musical theater life.

You once starred in a regional production of The Wiz. What did you think of the recent live NBC version?

It was a great adaptation of it. It really was a wonderful production of it. There were some memorable moments and I liked the fresh take on it.

I know you got your start by doing drag [as your own character Crystal Demure] before being cast in this role. With your experience as a drag performer, what are you able to bring to this role that another actor may not?

I've been doing drag for five years, so I've lived the drag lifestyle; I've hosted shows, and events, and parties. So I just have a better understanding of being a drag queen and not just playing one. I've done the gigs that have paid me $20 plus tips and I've done bigger things as well. I just really understand every aspect of the drag lifestyle. 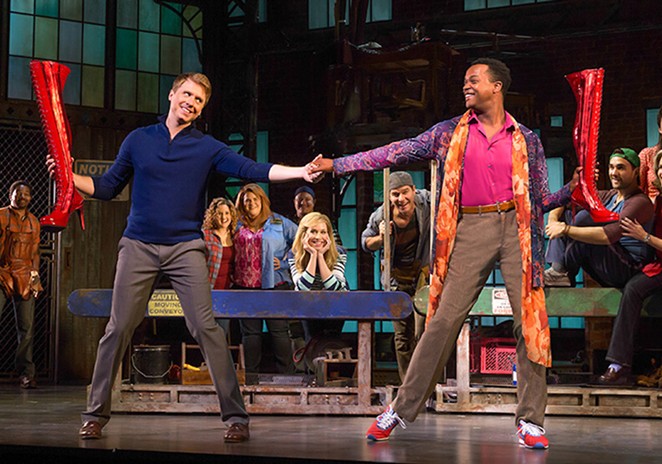 It's definitely opening the eyes of America. As actors, we always have fun watching the couple in the front row where the man is reluctant to be there, and he doesn't know what he's gotten himself into. But by the end of the show he's up dancing, clapping and cheering because he realizes that these drag queens are just normal people. And he realizes that we have hearts, but we just happen to be wearing makeup and heels — that's the thing that's always surprising — people don't know what to expect, even with just the title alone. What is Kinky Boots? What is this we are about to experience?

What do you think about shows like RuPaul's Drag Race that have made drag so popular in recent times?

It's definitely helped people understand drag and shown drag in a different light. It's proved that there is such a wide variety of drag and that there are no limitations to it. There are a lot of negative attachments that people perceive about drag queens and it's definitely shown that they're just normal people like everyone else. And that it's a creative endeavor. It's an art form — it really is — and it should be respected as such.

I know you recently came out to your father. Did having success as an actor who plays a drag queen make the process easier for you? And how did the show help your father understand what it is you do?

Yes, he didn't know that I had been doing drag for years. We had joked about it [when I got the role] and he said: "Just don't bring any wigs home." He's seen the show twice now and understands that drag is just a part of who I am and is proud of who and what I am ... We sat down and talked about it before he even saw the show and I expressed to him that personally it was something that I had creative control over and it was a way for me to express myself and make people think, and to effect change in the world. I happen to choose the medium of drag to do that with. And he understood and respected that. And he understood that it wasn't something like — that I wanted to be a woman, or that it wasn't something outlandish. And now he also understands me better as his son, having seen the show.

During the show, you transition from drag to male, and back to drag. How exhausted are you after the show?

It takes a lot out of you. It's a matter of just being committed to it and taking the ride for what it is. You definitely have to take extra care of yourself, and I've had to learn that lesson, especially traveling, and moving from city to city. We do eight shows per week and then have to move to a different city. So you have to be extra careful and more aware and mindful of your actions on and off stage.

Ultimately, what would you say is the message behind Kinky Boots?

To accept people for who they are and what they bring to the world.

What's the kinkiest thing you've done since you've been on tour?

You don't have to answer that.

We keep it pretty kinky on the road. There are times after the show we keep on the drag and go out and party. That's the most fun we have: being able to travel with such an amazing show and being able to experience the gay culture of America.