The all-star played with the Missions Saturday and Sunday while completing rehab on an injury. 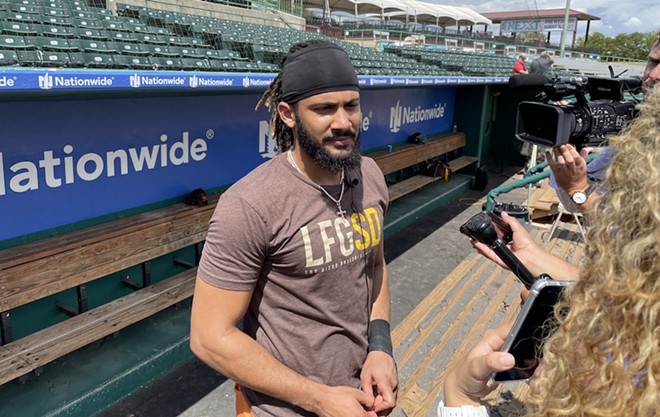 Tatis is undergoing rehab after surgery to repair a fractured left wrist he sustained before the start of the 2022 season, so finding his rhythm on the same field and in the same Flying Chanclas jersey where he started his career only seems fitting.

The Missions are the Padres' AA affiliate, and Tatis' two-season stint with club included the year it introduced its Flying Chanclas jerseys.

Tatis assumed the role of designated hitter Saturday in front of a sold-out crowd at Nelson Wolff Stadium. He went 0-2 and walked twice at four at-bats.

During the Sunday game, Tatis went 0-3 and grounded two outs in his first start as shortstop since his injury. He was pulled from the game at the top of the 6th inning.

In his final at-bat, Tatis rung off a bomb to left field, and for a brief moment, the entire stadium held its breath. The ball found its way into foul territory and  a collective sigh of disappointment escaped the crowd.

When asked about the difference between playing in front of San Antonio and San Diego fans during his pre-game media availability, Tatis quipped, “There’s about a 40,000 people difference.”

“The people in here [San Antonio] are always loud and come to cheer,” the 23-year-old added on a more serious note. “It always looks like they’re having a great time.”

Tatis' celebrity has taken on new heights in his three years in the Major League. He’s achieved a Silver Slugger award and has repeatedly been in the National League MVP race.

The Padres recently acquired all-star outfielder Juan Soto from the Washington Nationals, which renders a scary sight for opposing teams, especially as Tatis inches closer to rejoining the ballclub.

The Padres haven't yet confirmed of when he'll be back on the roster, but the return is likely in the next few weeks.