The pair are in the running for a $10,000 scholarship, and your online votes can help one of them win. 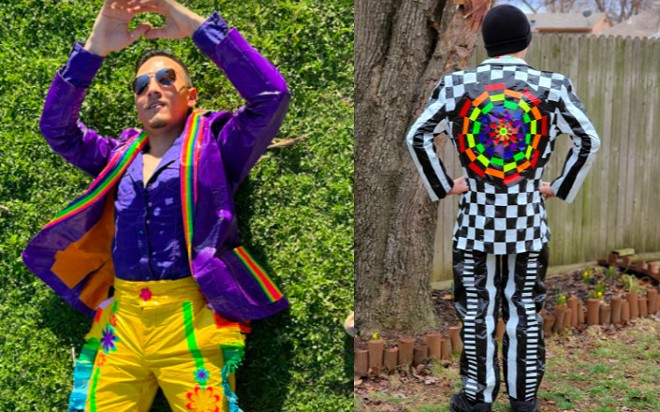 Memorial High School student Nathan Elias and recent Davenport High School grad Kaleb Burch have been selected as finalists in duct tape brand Duck’s annual Stuck at Prom scholarship contest. The contest pits teens against each other to create the ultimate prom outfit out of, you guessed it, duct tape.

While the local teens showed plenty of creativity to have their tux creations land among the five now in the running for the scholarship, their approaches couldn't have been more different. 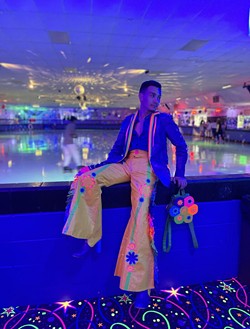 “Growing up with a humble upbringing meant we had to shop at thrift stores every once in a while, which I personally wasn’t mad about,” Elias wrote in his entry. “I can remember times while I was growing up that my mom and dad would be playing awesome songs like ‘Heart of Glass' by Blondie or ‘Dancing Queen’ by ABBA … So, it’s no surprise that while coming up with a concept for my tuxedo, I wanted to pay homage to one of mine and my parents' favorite decades.” 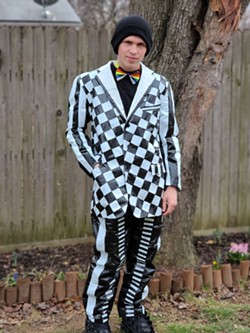 Courtesy Photo / Duck
Kaleb Burch's tux makes a statement about being different in a world some people see in black and white.
Meanwhile, Burch's prom attire incorporates both black-and-white and rainbow motifs. The jacket features a checkerboard pattern and the pants vertical stripes, while the bowtie and a target-shaped pattern on his back include all the hues of the rainbow.


“I wanted to go for something that would look nice but also give off a good message,” said Kaleb, who now resides in New Braunfels, in his online entry.

His mother, Jennifer Dingler, elaborated on the symbolism in an interview she gave with TV station KSAT.

“The theme of his project represents that being different is OK," Dingler noted. "He said that sometimes being different in a cut-and-dry, black-and-white society makes one feel like they have a target on their back. Individuality is perfectly normal.”

To help either Elias or Burch reign as prom king supreme, fans can vote at Duck's Stuck at Prom website. Polls are open until midnight on July 13.

The top vote-getters in both the dress and tux categories will each receive a $10,000 college scholarship. Eight runners up will receive $500 scholarships and Duck brand prize packs valued at $100.

Last year, Houston-born Larissa Leon snagged one of the $10,000 scholarships thanks to her work on a colorful prom dress that incorporated serious Fiesta San Antonio vibes.