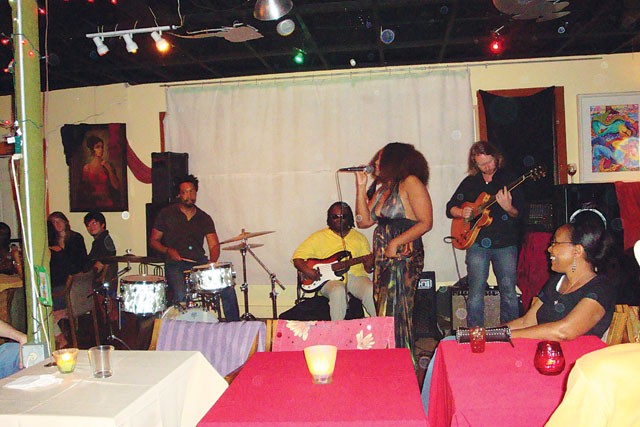 Best Use
Date destination, Friday nights, and to satisfy a craving for homemade sangria.

San Antonio isn’t exactly known for its jazz scene. Unfortunately, the River Walk, terrible drivers, and Ozzy’s Alamo pit stop still enjoy too much prominence in the contemporary San Antonio mythos. So it came as quite a pleasant surprise to stumble across the hidden vibe at Carmens de la Calle Café. The vibrant-yet-cozy venue serves as the antithesis to our nightlife scene of so many metal-apportioned, smoke-filled chambers, and is nestled conveniently just behind Candlelight Coffeehouse off the North St. Mary’s strip.

On a recent Saturday night, the twinkly patio out front is almost totally deserted as our troop of jazz appreciators pay the cash cover and venture inside. Owner Paula Sullivan greets us with a warm smile and marks us as first timers right off the bat. She graciously gets us set up with a pitcher of the house-made sangria before we settle in at a table. Ensconced in warm colors, dim lights, and surrounded by eyelash-batting couples, our team of lonely hearts found the dating scene some had been missing.

At pitcher number two, Sullivan let us know that Carmens, now in its 11th year, is busiest on Friday nights. That’s flamenco night, when the crowds come so heavy that the club has started holding two shows to accommodate the crush of bodies, a nearby patron chimed in.

The night’s band was fronted by Tameca Jones, a jazz and soul singer who came in from Austin to perform for this intimate and appreciative crowd of 20-something. It didn’t feel like the bar was under capacity, though — everyone was having a blast.

Lubricated by wine and soulful music, the crowd was gregarious and it’s not hard to get caught up in a peripheral conversation. One of my friends spent a good chunk of the night talking to a man suited out as a long-lost Hispanic member of the Rat Pack about the life of a musician in San Antonio’s underdeveloped jazz scene. I even found myself animatedly and aggressively agreeing with the band and their fans about the state of the genre. Then it suddenly hit me that basically everything I know about jazz I learned during my short stay at Carmens. That’s when I also realized that, a) Carmens makes quick, adamant fans, and b) the sangria packs something of a hidden punch. My quick conversion to San Antonio’s jazzy underworld aside, consensus held that Jones and band actually were fantastic. Several of the wide-eyed admirers said that they make a point to come out anytime the sultry Jones makes an appearance.

What they may lack in numbers, Carmens’ Saturday-night clientele certainly makes up for in passion. A night here may be a touch more low-key than what one typically finds at other North St. Mary’s venues, but then again: there is always Flamenco Fridays. •