Although he started his professional career as an attorney, it didn't take Tucker long to accumulate music-industry bragging rights that had little to do with his background in law. 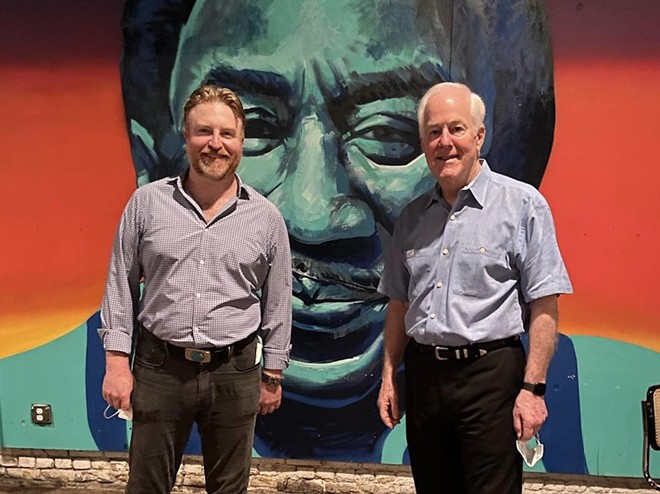 Like any stripe of show business, the music industry is full of folks eager to pretend, take credit and brag about their accomplishments.

Late San Antonio venue owner Blayne Tucker was the opposite of any of those stereotypes, according to friends and associates. They remember the co-owner of St. Mary's Strip staple The Mix as a tireless advocate for independent music venues both in the Alamo City and across the country.

Although he started his professional career as an attorney, it didn't take Tucker long to accumulate music-industry bragging rights that had little to do with his background in law.

But he seldom trumpeted those accomplishments and did plenty of additional work behind the scenes — from lobbying for disaster relief for independently owned music venues to seeking legislation to stop overcharging by ticket resellers. Recently, he'd been working with others on a touring circuit to make indie music venues more competitive with Live Nation.

During the COVID crisis, Tucker emerged as a key advocate for the passage of the federal Save Our Stages Act, which allowed indie venues to tap into $15 billion in Small Business Administration grants to survive pandemic shutdowns.

"This is the difference between extinction and survival for this industry," Tucker told the Current in 2020. "This is what we've been working for."

Tucker dealt with unlikely allies, including John Cornyn, Texas' senior GOP senator, to secure bipartisan support for the measure. He also conducted national interviews in support of the act, joining the voices of music luminaries including Willie Nelson, Alice Cooper and Billie Eilish.

"I'd say he walked pretty softly and carried a big stick," said Jeff Smith, owner of San Antonio's Saustex Records and a longtime music promoter. "I don't think any of that Save Our Stages stuff would have passed without his lobbying efforts."

Although Tucker was a lifelong music fan, the Clark High School grad's demeanor didn't exactly scream "St. Mary's Hipster." He favored cowboy hats and track pants over skinny jeans, and he delivered wry observations on life and the music business with an expansive Texas drawl.

Despite the diversity of the live acts he booked and enjoyed, friends said he held an unashamed appreciation for the decidedly unhip soft rock of the late '70s and early '80s, including Michael McDonald.

Acquaintances also remember Tucker as an avid gardener who showered them with tomatoes and other backyard bounty. During COVID, he was early to jump on the sourdough bread craze, dropping off starter on friends' doorsteps during quarantine.

Over the years, Tucker made efforts to mediate between residents of the gentrifying neighborhood around the Strip and its bar owners. He both founded the St. Mary's Business Owners Association and served as a president of the Tobin Hill Neighborhood Association — organizations frequently at odds.

"After the shock of hearing about Blayne's death, it occurred to me that, man, we lost a big voice in the fight to protect the Strip," said Aaron Peña, owner of St. Mary's bar The Squeezebox. "Losing him has meant losing not just a friend but also an ally."

When Peña, then 28, opened his drinkery seven years ago, Tucker was among the first Strip business owners to welcome him, check on his needs and offer advice.

"He always had a communal approach to finding solutions," Peña said. "He kind of tried to look at things from every angle."

In recent interviews with the Current, Tucker said he was determined not to let heavy-handed noise and traffic enforcement damage already fragile businesses on the Strip. Many venues have experienced months of sales slumps due to the glacial pace of city construction projects.

"If the public doesn't wake up pretty quickly, they're essentially going to find themselves ostracized from the entertainment district they've enjoyed for 40 years," Tucker said.

After buying The Mix in 2015 with partners including Bauhaus Media's Eric Hanken, Tucker led the charge to expand the club, which had primarily hosted local bands, into a destination for regional and national touring acts. He oversaw the addition of a stage and new PA, and even helmed its early bookings, Hanken said.

"In his heart, he loved music and he was all about music," Hanken said. "He wasn't the regular kind of attorney who sat behind a desk and wrote contracts. ... I think this stuff was all fun to him, like a hobby. All of it was related — one big world he lived in."

San Antonio Current Publisher Michael Wagner, who partnered with Tucker on ventures including the Maverick Music Festival, said he came to appreciate him as both a friend and an advisor. He likened Tucker's ability to see every aspect of a deal as "assembling pieces on a chessboard."

"He was always the person I went to when I needed a gut check on anything," Wagner said.

While friends and associates praised Tucker for his willingness to compromise and take in broad perspectives, he also had a low threshold for bullshit and was unafraid to call it out.

For example, Tucker last year agreed to participate in a task force charged with rethinking San Antonio's noise ordinance. He eventually quit the group, unleashing a fiery resignation email complaining about the group's lack of diversity.

At the time of Tucker's departure, six of the city's 10 districts had no representation in the group, he noted. What's more, he added, it was "disproportionately comprised of individuals in District 1 who have very narrowly-focused disputes against specific establishments that reside in their immediate vicinity."

At that time, eight of the task force's 15 members were neighborhood representatives, while just four had interests in bars or venues. The remaining three were city staffers.

"I fail to see the efficacy in allowing a task force consisting of folks who predominantly live near the city center [to speak for] residents and businesses in other parts of the greater San Antonio community, who lack any voice in this assessment," Tucker wrote. "I fear that the lack of diversity on this task force will have a discriminatory impact, especially on folks in impoverished areas of the city."

Business associates said Tucker moved in a wide variety of circles, making him a valuable connection who could pull in experts, investors or allies representing a wide variety of interests. His understanding of law also made him a master negotiator when it came to contracts and deals.

"He took it all seriously," Hanken said. "Whether it was growing tomatoes, whether it was creating a bill at the club or whether it was buying a venue, he approached it all with the same kind of enthusiasm."

Tucker's family plans to hold a remembrance on Saturday, February 11. Details are forthcoming. The family asked that in lieu of flowers, friends donate to the National Independent Venue Foundation or the San Antonio Food Bank.