Analysis: What will Texas Reopen, and When? 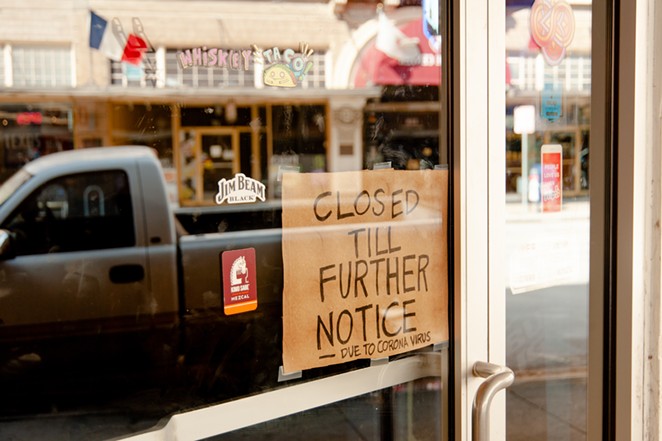 Aimee Wyatt
Have a little empathy for the people in elected office as they fret over possible answers to the question we’re all asking: “Is it safe to go outside yet?”

The conversation of the week centers on the economy — on which businesses can restart and which people can get back to work. But this isn’t just about commerce. Other conversations lurk behind that one, and have more to do with people than with businesses and other institutions: When is it really safe to stand in lines for this and for that, for groceries or hardware or movies or voting? When will it be safe to go back to school? Should parents send their children back to school before a vaccine has been found and proven?

The answers are hard. The consequences are enormous. And public officials are flummoxed.

“This is not gonna be a rush-the-gates, everybody-is-able-to-suddenly-reopen-all-at-once” situation, Gov. Greg Abbott said this week at a news conference. He was announcing the availability of federal loans for small businesses and is expected to make some news this week about when some of the state’s closed businesses can reopen, and under what circumstances.

Texas is still wrestling with a COVID-19 testing deficit that makes guesswork of a lot of this policymaking. It would be so much easier for officials to say when it’s safe for Texans to leave their homes if they had a good read on the status of the pandemic, where it’s weak and strong, where it’s waxing and waning. Without widespread testing, they don’t have a good map.

Voting questions fall right next to the economic ones. Texas has primary runoffs scheduled in July, having delayed them from May, followed by the general election in November.

Texas Democrats filed a federal lawsuit this month asking the courts to order the state to expand voting by mail in the face of the pandemic. They argue that to do otherwise would violate the U.S Voting Rights Act. The filing, in part, reads like a list of headlines about pandemic projections — the same kind of information elected officials are studying as they decide whether to reopen some of the businesses ordered to close and to restore some of the public activities that have been restricted.

Texas allows voters to cast absentee ballots by mail if they’re out of their home county during an election, over 65, if they’re sick or disabled, or if they’re confined to jail but still eligible to vote.

The suit argues that the coronavirus pandemic puts voters inside the absentee voting law’s definition of disability: “A qualified voter is eligible for early voting by mail if the voter has a sickness or physical condition that prevents the voter from appearing at the polling place on election day without a likelihood of needing personal assistance or of injuring the voter's health.” Based on that, it argues that “a person who considers herself to be confined at home in order to avoid the spread of disease plainly falls into the persons entitled to vote by mail under this statute.”

The plaintiffs seek to allow anyone older than 18 to cast absentee ballots. The courts will figure that out. But if the state is in the position of restricting activities — business or social — in the interest of slowing the spread of the disease, it will be hard for state officials to argue that there is no danger in putting some or all of the state’s 16.2 million registered voters in line for the elections in July and November.

Everybody’s anxious to get out of their houses or, if they’re still out in the world working, to at least return to a time when that was a safe and normal thing to do. But the peak of the coronavirus in Texas isn’t here yet, and the reasons behind the current local and state government restrictions haven’t changed.

Abbott said this week he sees some glimmers of good news along with the bad. But the bad news is still the order of the day. It’s still not safe out there, as much as we’d all like to emerge from our bunkers.

The Greg Abbotts of the world would like nothing better than to open the gates. And they’d hate nothing more than opening the gates too early.
Scroll to read more San Antonio News articles
Join the San Antonio Current Press Club