Bad Takes: An open letter to Jordan Peterson following his dismissal from Twitter

One hopes, perhaps in vain, that this is where your trans-bashing bigotry at long last jumps the shark, and all except the most demented of your followers shake their heads regretfully and take their business elsewhere. 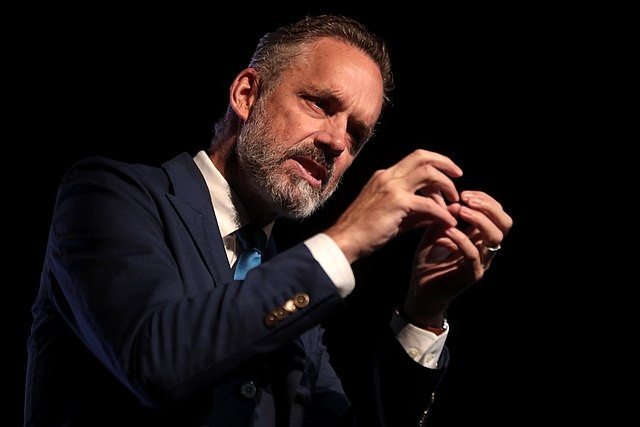 Wikimedia Commons / Gage Skidmore
Jordan Peterson gets animated during a 2018 speaking engagement.
Bad Takes is a periodic column of opinion and analysis.

Peterson has said he’d “rather die” than lift the suspension by acknowledging any violation of Twitter’s community standards against harassment based on gender identity. Instead he chose to upload a 15-minute recitation of an editorial he’d written for his new publisher, The Daily Wire, defending the offending tweet. The following open letter is a reply to that defense, which should be watched beforehand to be believed.

Are you not proud to be a Canadian, as I am to be an American? Do you therefore consider patriotism “a sin?”

And is it also your belief that, if you woke up tomorrow to realize you’d been given breast implants, that would suddenly make you a woman? Obviously not, because gender is not merely skin deep, nor some “fad,” but arises from our innermost sense of self. There are people whose gender does not align with their assigned sex at birth, their existence is not “theoretical,” and I would direct you to the American Psychological Association’s guidelines on the matter — hardly a “Marxist” organization, should you ever, on a whim, decide to look up the definition of your favorite pejorative.

Furthermore, if you pride yourself on being an ardent defender of free markets, then you must believe a private company ought to be able to deny you service for any reason — certainly for engaging in what they consider to be harassment of their other customers.

Where is the grand civil rights issue in their formally asking you to retract a willful breach of contract and decorum? The ACLU would gladly defend your shouting almost whatever you please in the town square or handing out whatever pamphlets you wish on the street corner, and surely you’d feel more at home on other social media platforms anyway, where hate speech is commonplace and universally applauded.

You are not Solzhenitsyn, you are a Karen. And attentive observers will note the sinister tones with which you imbue the profit motive when anti-capitalist rhetoric suits your own ideological agenda. “Gender-conforming surgery,” you informs us, is now “a $300 million per annum growth industry.” By way of comparison, your new employer, right-wing propaganda outlet The Daily Wire, pulled in $100 million in revenue in just 12 months — and all without actually helping a single soul.

Because if you cannot discern the insanely narcissistic moralism exuded by your current acting-out, you’ve lost all bearings of decency and discretion, if you ever had but a semblance of them to begin with.

One hopes, perhaps in vain, that this is where your trans-bashing bigotry at long last jumps the shark, and all except the most demented of your followers shake their heads regretfully and take their business elsewhere.

For we have asked trans children what hurts and they have told us, and we now have medicines that can make it better. Far from “subjugation to a lifetime of expensive medical complications” and “misery,” the research is clear.

“There is a significant inverse association between treatment with pubertal suppression during adolescence and lifetime suicidal ideation among transgender adults," writes the American Academy of Pediatrics. "These results align with past literature, suggesting that pubertal suppression for transgender adolescents who want this treatment is associated with favorable mental health outcomes.”

The European Association For Transgender Health agrees: “Treatment of transgender adolescents involving gender affirming medical interventions (puberty suppression and subsequent gender affirming hormones) is the most widely accepted and preferred clinical approach in health services for transgender people around the world. The aim of puberty suppression is to prevent the psychological suffering which stems from undesired physical changes that occur during puberty, and to allow the adolescent time to carefully consider whether or not to pursue further transition when they are eligible. To be effective, this treatment must commence early in the puberty process.”

Evidently, it’s not trans folks who are "confused," it’s you. Adolescence is enough of an ordeal already, there’s simply no excuse for a clinician — who apparently used to treat real-life patients, all evidence notwithstanding — to brazenly ignore the cruelty of forcing a kid to suffer through a puberty that’s not who they are.

Such a statistically rare trauma is no doubt difficult for most of us to imagine or empathize with. And that’s what the demagogues you abet, working at a frantic pace throughout the United States, can count on.

Unlike racial minorities or gays, many of us might go through our entire lives without ever befriending someone who is transgender. By themselves, they cannot affect the outcome of any election, the success of any corporation, or the reputation of any public figure. And if the rare can be viscerally portrayed as the abominable, those who feel their "traditional values" under threat in an ever-evolving culture can discover religious gratification and political power in conflating their discomfort, fear, and disgust with righteousness. But what traditional value is honored by pinching up one’s face at the sound of a child in pain?

If any applicable youths should unfortunately happen upon the above video of a bitter spiteful desiccated prune of a pseudo-intellectual vilifying who they are, you might take solace in reciting the irrepressible June Jordan’s "Poem about My Rights": “I am not wrong: Wrong is not my name / My name is my own”.

In fact, extrapolating on the poem a little, we might even say, aspirationally, that it’s the Petersons of the world whose names are now dead.

Whatever precautions we prudently require for children and young adults, Elliott Page is, of course, a 35-year-old man. But I agree with you, Mrs. Peterson, that much of this cynically stoked controversy turns on whether one finds their example an admirable one. That your constipated rant has been viewed 2.6 million times in three days, shared almost 15,000 times on Facebook, and found approval from 280,000 YouTube users should at least settle the question of whether Mr. Page’s decision took courage.

For the record, contrary to your vile historical parallel, the medical victims of the Nazis did not volunteer themselves for surgery, which makes an ethical galaxy of difference - though one would have expected you of all people, "Red Skull" Peterson, to appreciate past fascists’ uncompromising opposition to the "undesirables" and "degenerates" they tried their level best to exterminate.

Pride — not as an affirmation and celebration of one’s self-worth but as an excessively high opinion of one’s own self-importance — does indeed goeth before the fall, just as time wounds all heels.