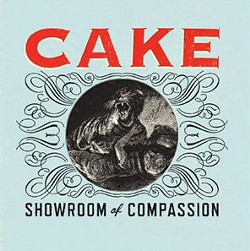 
In the ’90s, while the world was being swept away by the grunge explosion, Cake was pop music’s Ugly Duckling: either you loved them for how different they were, or you just hated their guts, just like they themselves hated what they called “dumb American rock.” Fast-forward to 2011: grunge is dead, while Cake is still alive, serving up their first album of originals since 2004’s Pressure Chief. Showroom of Compassion, produced and engineered by the band members themselves at their solar studio, starts strongly. It’s as if singer/keyboardist John McCrea knew exactly what pisses off the band’s critics: “You receive the federal funding/you can add another wing,” he repeats in “Federal Funding,” while guys in flannel shirts all over America look at each other and say, “Huh? Federal funding?” Yet, the song works, as does most of the rest of the album. Unclassifiable and unpredictable as ever (alternative? fusion? ranchera-flavored classic rockers? comedic country-post-punk rock?), Cake’s songs are mostly solid, the musicianship jaw-dropping, the sounds gorgeous, and the adventurousness intact. You may not like it, but you can’t accuse them of not trying to make real music.