CityScrapes: San Antonio's public giveaways haven't lived up to their promise of a thriving downtown

The reality of downtown San Antonio is that we succeeded in creating a place for tourists to wander that holds little appeal to San Antonians beyond the twinkling lights of the River Walk. 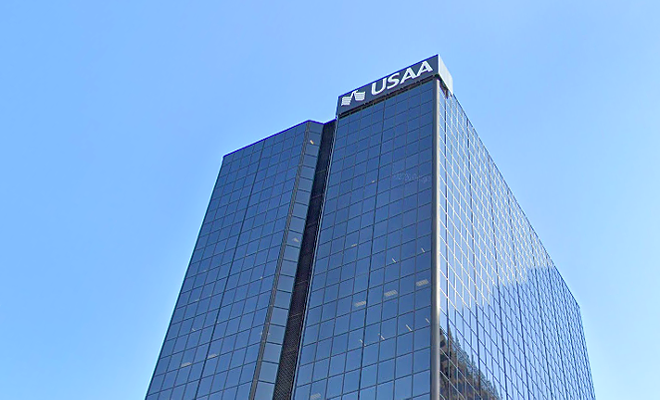 Google Maps
USAA will terminate its downtown leases at the end of this year and repay the city and county governments for their financial assistance.

Editor's Note: CityScrapes is a column of opinion and analysis.

The masks have largely disappeared. Shoppers have returned to the malls and stores in significant numbers. The restaurants at the Pearl are booming, at least on weekends. Air travel is up. And we've seen a substantial return of visitors to downtown hotels.

Yet it's also clear that the effects of the COVID-19 pandemic aren't fully behind us. Economic impacts such as inflation, uncertain supply chains and shifts in the nature and location of work continue to create turmoil for cities including San Antonio.

The New York Times recently pondered "The Fate of the Emptiest Downtown in America," ruminating on the current state of San Francisco's urban core. Boosted by the success and promise of the tech industry, San Francisco's downtown office market boomed over the past 10 years. But with the pandemic, office occupancy slumped. The cause? A host of tech firms shifted to fully remote work or some form of hybrid requiring limited time in the office.

Beyond the formal occupancy numbers, even space classified as "leased" is used by fewer employees. For San Francisco, that means office workers and their spending have largely disappeared from downtown's streets — and from the shops and services that depend on the office economy.

Those shifts in the downtown office economy extend well beyond San Francisco and the tech sector. And the Alamo City has been far from insulated from the change.

In 2017, San Antonio-based USAA announced plans to move a significant number of employees to a pair of downtown office buildings. Aided by city and county tax abatements, as well as a city loan to expand parking, the promise was that the insurance and financial services firm would shift some 2,000 workers to the One Riverwalk and 300 Convent St. buildings in what local politicos called a "game changer" for downtown.

But, in a recently announced development, USAA will terminate its leases at the end of this year and repay the city and county governments for their financial assistance.

USAA's original embrace of downtown was always a question mark. While the expansion held the promise of more activity in the center city, it also pointed up the limited appeal of our tourist-oriented urban core. We had to rely on a local firm — and one aided by public subsidies at that — to fill empty high rises because we weren't attracting the office and tech jobs that supported downtowns in other cities.

The loss of USAA's presence wasn't the only jolt to our urban center this year. Following the move of Zachry Construction's headquarters to an office park by Wurzbach Parkway, the Zachry family announced the sale of the distinctive Tower Life Building to a group of local developers including the Red McCombs family and Ed Cross. The new owners, in turn, revealed plans to convert the structure into mixed-income housing, paired with the county Public Facility Corp.

So once again, office jobs and space have evaporated from downtown, and local development interests have asked for public assistance to make their plans succeed.

Downtown boosters regularly spin the prospect of new housing and new development as heralding a grand new era of vitality and success for our city center. There's the promise of Hemisfair, the wonder of the new San Pedro Creek "culture park" and adjacent development, the potential development around the new Frost Tower and perhaps even a new minor league ballpark somewhere.

Yet the reality of downtown San Antonio is that we succeeded in creating a place for tourists to wander that holds little appeal to San Antonians beyond the twinkling lights of the River Walk. That, of course, follows massive public investment in things including the expansion of the Henry B. Gonzalez Convention Center, the Shops at Rivercenter, the Grand Hyatt San Antonio River Walk hotel, the Alamodome, St. Paul Square and years of deals done in the name of job creation and public-private partnership.

Even a few years after the culmination of former Mayor Julián Castro's "Decade of Downtown," having spent millions in subsidies for new housing in the center city, we still don't have a lively, vibrant, authentic downtown that reflects and builds on our own history and culture.

Still, county commissioners recently managed to demonstrate the one thing our local officials excel at — giving away tax money. The county politicos approved a tax abatement for the new headquarters of the Bill Miller Bar-B-Q chain, which moves it away from downtown to a site on Highway 151, promising a total of 24 new jobs. Yes, as in two dozen.

Local officials capped that giveaway for a business already headquartered in San Antonio with yet another tax abatement deal. This one was for the supposedly resurrected — but seriously open-to-question — DeLorean Motor Co. and its pledge of a new building and hundreds of jobs at Port San Antonio.

For decades, city and county officials have managed to avoid dealing in the unpleasant market realities our downtown faced. Instead, they constantly promoted new deals, development announcements and the latest in public subsidies and giveaways. My earnest wish for the coming year is that our community can realize that development promises and tax giveaways don't mean things will get better. They just mean someone is savvy enough to seek public help as they look to make more money.