A local social justice group planned a counter-protest outside the Aztec Theatre but opted against it, citing security concerns. 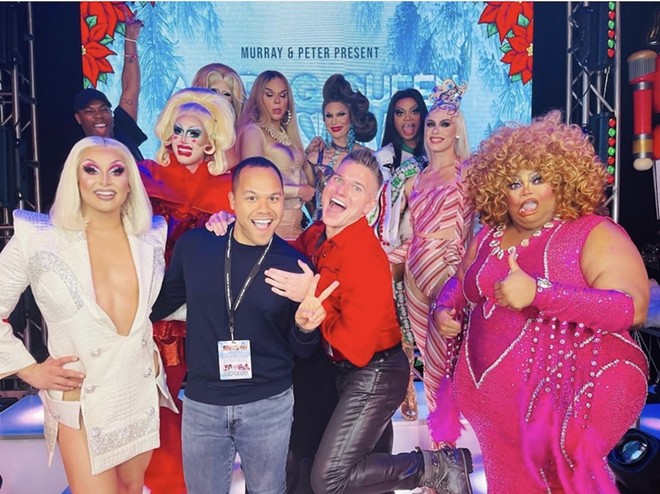 Instagram / Chadryanmoore
The show A Drag Queen Christmas is coming to San Antonio's Aztec Theatre as part of a national tour.
Editor's Note: This story has been updated to reflect Southwest Workers Union's decision not to stage a counter-protest due to security concerns.

A far-right group is threatening in social media posts to show up at San Antonio's Aztec Theatre next month — potentially with firearms in hand — to protest a drag show open to all ages.

This Is Texas Freedom Force, described as an "extremist militia" by the FBI, plans to protest A Drag Queen Christmas on Dec. 13, according to tweets from the group. Its tweets also praise a bill introduced by Texas State Rep. Bryan Slaton, R-Mineola, to ban those under 18 from drag performances across the state.

In flyers shared in This Is Texas Freedom Force's tweets, the militia labels those who support drag shows as pedophiles, adding that "open carry and concealed carry" are welcome at its protest.


🚨 Alerta San Antonio 🚨
A right-wing boomer militia has called on their members to demonstrate a "show of force" at a drag show on December 13th. pic.twitter.com/W7L2lFAQHV

Join us Dec 13th as we protest underage kids being allowed in adult themed drag events. We also will be supporting Rep Slaton’s bill to ban underage kids from these shows. As you can see, the opposition is scrambling to defend their pedophilia. Event should be fun. #Patriots https://t.co/s1FHHWVHK7 pic.twitter.com/hio0utUqRY

A Drag Queen Christmas is being staged by Detroit-based promoter Murray & Peter, and will bring drag performers featured on the popular TV show RuPaul's Drag Race to the Alamo City. While the Ticketmaster lists no age limit for attending the event, the show's website includes no language indicating that it's marketed to children.

Just the same, in a video promoting its protest, This Is Texas Freedom Force likened the performance to taking "underage children to a strip club."


Child abuse will not be condoned in Texas!

It's not the first time the extremist group has protested a drag show. Members of This Is Texas Freedom Force caused a ruckus outside a drag brunch in a Dallas suburb in August, according to tweets from Dallas-based investigative journalist Steven Monacelli.

A man sporting a bulletproof vest with a This Is Texas Freedom Force patch attended the protest at Anderson Distillery & Grill in Roanoke armed with a bat wrapped in barbed wire, according to Monacelli's tweets.


Another counterprotester at the drag brunch in Roanoke, Texas came prepared for violence. He's carrying a baseball bat with razor wire wrapped around it. pic.twitter.com/GkUsMhVTeo

This Is Texas Freedom Force's planned Alamo City protest comes at a time when the LGBTQ+ community nationwide is under attack from prominent far-right personalities and politicians, who have propagated the myth that it's "grooming" children through drag shows.

The Republican-controlled Texas Legislature has also introduced legislation ahead of its next legislative session aimed at punishing transgender Texans, and top GOP officials including Gov. Greg Abbott trafficked in anti-trans rhetoric and stunts ahead of the midterms to pander to their base.

The protest outside the Aztec also follows a mass shooting at an LGBTQ+ bar in Colorado Springs earlier this month that's being investigated as a "bias attack," according to an NBC News report.

Late last month, San Antonio-based social justice group Southwest Workers Union announced plans to stage a  counter-protest to This Is Texas Freedom Force's rally. However, on Tuesday it shared an Instagram post saying it no longer plans to show up to security concerns. The post urged others to make the "best decision for yourself and your security."

"Although we agree that hatred and fascism have no place in our city, we think that the risk of escalation and violence is too great with the presence of armed opposition," SWU officials said.