ORI accused Kaushal of "intentionally, knowingly, and/or recklessly falsifying and fabricating the experimental methodology," including misrepresenting the numbers of treated and untreated non-human primates used in his research. A study based on that work appeared in the American Journal of Respiratory and Critical Care Medicine in 2020, and it was retracted the following year, according to the feds. 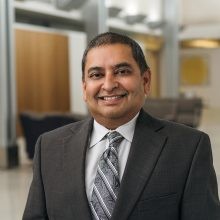 Courtesy Photo / Texas Biomedical Research Institute
Deepak Kaushal
Under a voluntary settlement with ORI, Kaushal agreed to one year of supervision for federally funded research. However, he will remain as director of Texas Biomed's $40 million primate facility, which is funded by the National Institutes of Health.

In a statement supplied to the Current, Texas Biomed officials said they have "imposed ramifications on the researcher." Those includes a review of all study data he produces in the next year as he seeks grant funding or publication in peer-reviewed journals.

They also said the alleged fabrications occurred at another institution and that the animals used in the research weren't under Texas Biomed's care.

Further, Texas Biomed plans to provide refresher training to all of its scientific staff on research integrity, according to the statement.

"It is important to note that corrective action was taken by Dr. Kaushal, including a repeat of the study with correct study design," Texas Biomed officials also said. "The scientist has not received a research misconduct finding before and all data from studies carried out at Texas Biomed has been reviewed and found to be accurate."

In an emailed statement, People for the Ethical Treatment of Animals (PETA) called for Kaushal's removal as director of the Southwest National Primate Research Center, adding that OSI's findings also should bar him from receiving publicly funded grants.

"He has betrayed the government, the scientific community and taxpayers by falsifying and fabricating information on his grant application and in published work — all while he was infecting monkeys with tuberculosis and simian immunodeficiency virus," PETA Senior Vice President Kathy Guillermo said.

The OSI settlement agreement is the latest black eye for Texas Biomed, which drew fire from animal-rights groups last year after it told federal regulators that nearly 160 baboons in its captivity suffered amputations from frostbite during Winter Storm Uri.

Over the past decade, the U.S. Department of Agriculture has required Texas Biomed to alter its care policies several times after deaths of primates in its care. In 2012, the USDA slapped it with a nearly $26,000 fine for three violations of the Animal Welfare Act, the Express-News reports.

Editor's note: This story was altered to reflect that the animals involved in the research questioned by federal regulators were not under Texas Biomed's care.