Lost in Lockup: Last year, prisoners in Bexar County and across Texas died in record numbers

Courtesy of Bexar County Sheriff's Office
A deputy at the Bexar County Jail checks in on inmates using a new digital system meant to improve accountability.
On February 15 of last year, Claudine Marie Parisi, a 49-year-old woman jailed in Bexar County on a criminal trespass charge, died while being treated for the effects of a meth overdose.

The following day, another prisoner in the county lockup, Robert Lee Edwards, 64, succumbed to heart disease, diabetes and other chronic conditions while being held on a minor theft charge.

Less than three weeks later, the Bexar County Jail had another death on its hands. Deputies discovered that Joel James Sambrano, 20, a suspect in a deadly home invasion, had hung himself. Deputies cut him down, but he perished an hour later.

That swift string of fatalities accounted for just three of the 18 deaths in custody recorded last year by the Bexar County Sheriff’s Department — a record high and a jump from the 12 reported in 2019 and 10 reported in 2018.

And Bexar wasn’t alone in tallying record numbers of deaths in custody during 2020. Other county lockups and the Texas prison system experienced significant spikes in fatalities last year, according to an analysis of state filings by the nonprofit group Texas Justice Initiative.

Collectively, prisons and jails in the Lone Star State reported 974 in-custody deaths last year, up from 721 in 2019. In the 16 years included in TJI’s analysis, 2020 marked the first time that number had ever exceeded 800.

Experts say last year’s spike represents a failure of the most basic charge placed before prison and jail operators: ensuring the safety of people in their custody. While COVID-19 contributed to the overall number of 2020 fatalities, some facilities also saw significant upward swings in suicides and deaths by natural causes.

“You need to recognize that these numbers are huge; they’re astronomical,” said Michele Deitch, a distinguished UT-Austin law school lecturer who specializes in jail and prison oversight issues. “They absolutely demand the attention of lawmakers. They demand a legislative hearing, and they demand action to make sure we don’t see this again.”

Although Texas’ prisons and jails operate under some shared standards, the number of deaths in custody at each is to some degree determined by policy decisions at the local level, meaning the data will likely be scrutinized for months — perhaps years — to come, TJI Executive Director Eva Ruth Moravec said.

“While these are small numbers at the individual jail level, the numbers represent lives,” Moravec said. “Decisions made at the local level may have had a significant impact on those individuals whose deaths we’re talking about.”

The Texas Justice Initiative’s data goes back to 2015, the first year the Texas Commission on Jail Standards began collecting data with its current form. Moravec said the prior data was too spotty to be reliable for year-to-year and facility-to-facility comparisons. 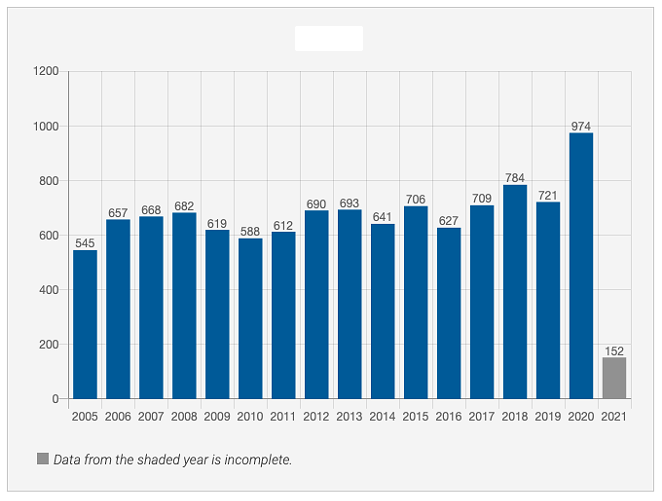 Prison during the pandemic

The pandemic was the most significant contributor to deaths in the Texas prison system last year, totalling 265 fatalities and appearing to account for the 253-death jump reported by facilities run by the Texas Department of Criminal Justice.

“The COVID pandemic is the greatest challenge faced by TDCJ systemwide in the agency’s history,” the agency’s Director of Communications Jeremy Desel said in an emailed statement.

“Taking that into account in custody deaths have been essentially flat with a handful of exceptions for over a decade,” he said, adding that TDCJ will continue to provide the “highest level of care” to those under its supervision.

However, a research report on the spread of COVID-19 in Texas prisons conducted by Deitch and the LBJ School found that despite TDCJ’s pledge of highest-level care, state facilities were unable to rein in the spread last year, resulting in a “devastating human toll.”

Texas started the pandemic with one of the highest numbers of COVID-related prison deaths in the country, according to that analysis. But of the four states with the highest prison death counts early in the crisis, Texas was the only one that failed to substantially curb its number of coronavirus-related fatalities.

Further, Deitch said in an interview that the restrictions imposed on Texas prisoners during the health crisis, including extended lockdowns and a lack of visitations, likely fed into to stress and mental health breakdowns that ultimately contributed to suicides and deaths among already-vulnerable prisoners, including elderly ones.

“There was nothing inevitable about reporting this many deaths,” she said. “We knew from the beginning of the pandemic that COVID would spread like wildfire in this environment and that the restrictions were going to be really hard on the people who were going to go through them.”

Curbed by the counties

Even though the COVID crisis explains much of the rise in fatalities in Texas prisons, it doesn’t account for the higher numbers of deaths at county lockups, experts argue.

Brandon Wood, executive director of the Texas Commission on Jail Standards, said jails also supplied masks, increased sanitation and ensured they had enough negative-pressure cells to prevent air from quarantined areas from circulating back into other parts of the lockup. His agency, which oversees the state’s county lockups, estimates the number of COVID-related deaths at those facilities at 24.

“Twenty-four out of a population of 65,000 is, I believe, below what anybody would have expected,” Wood said. “It’s a challenging environment, even in a non-pandemic time.”

Ultimately, he cautioned, it could take several years of sifting through the data before researchers fully understand why Texas tallied its historic spike in non-COVID jail deaths.

In Bexar County’s case, suicides accounted for the largest share of jail deaths last year — 33% of the total, according to TJI’s numbers. In 2019, they represented 42% of the total.

Over recent years, reform groups including the Texas Organizing Project have called on Bexar County to cite and release more people arrested for minor crimes or allow them to leave on their own recognizance. Suicides, they argue, are an inevitability when people with mental health or substance abuse problems languish in cells, unable to make bail.

While Bexar County Sheriff Javier Salazar, County Judge Nelson Wolff and DA Joe Gonzales have all called for bail reform, they have yet to codify such a move, said Laquita Garcia, a statewide policy coordinator for TOP. She points to the release of people picked up on nonviolent offenses during the pandemic as evidence that the county can make those efforts permanent without affecting public safety.

“As we know, jails are not mental health facilities,” Garcia said. “We should not continue to use incarceration as a solution to mental illness, drug addiction and homelessness.”

Salazar said his office strove to reduce the jail population during the beginning of the pandemic, cutting it from 3,800 to 2,900. But that effort was thwarted by an order from Gov. Greg Abbott last spring limiting the types of prisoners that could be released without bond.

After a 2019 rise in deaths, Salazar implemented a four-deputy team to deal with inmate mental health issues, instituted 24/7 in-jail suicide hotline and installed a high-tech system requiring deputies to log in at each cell door during prisoner checks. Additionally, the jail placed signage in its intake area warning inmates about the dangers of swallowing drugs to hide them — a frequent cause of overdoses.

Salazar said he agrees with TOP that jail isn’t the place for people with dependency or mental-health issues.

“We’re not going to let Hannibal Lecter walk out the door, but if they’re a low-level offender, get them out of here,” he said. 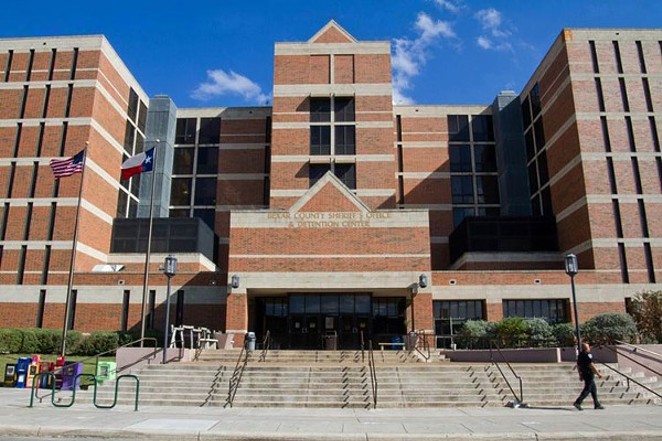 Courtesy of Bexar County
The exterior of the Bexar County Jail as seen from the front.
Not a blip

Experts caution that 2020 shouldn’t be seen as an anomaly — a blip that can be explained away by COVID and circumstances beyond officials’ control. Even after the pandemic passes, some of the factors that likely contributed to the spike will remain: an aging prison population and the arrest of people who should be in mental health facilities instead of cells.

UT’s Deitch said the numbers should give Texas policymakers reason to reevaluate jails and prisons from the ground up.

To be sure, the deaths continue. Texas jails and prisons have already reported 152 prisoner fatalities so far in 2021, according to TJI’s analysis. Reports are still trickling in from the reporting facilities, making it too early to tell whether the state is on a similar trajectory of custodial deaths this year, Moravec said.

Just last week, another name was added to the list: Marvin David Scott III. After a marijuana arrest, Scott — a 26-year-old schizophrenic man — died while being forcibly restrained by seven officers in Collin County Jail, pepper-sprayed and placed under a spit hood.

Scott’s family has called for more transparency in the case, pointing out that they weren’t even notified of a press conference called by county officials to discuss the death.