In 2021, all but 12 of 104 beaches were potentially unsafe for swimming on at least one day where they were tested. 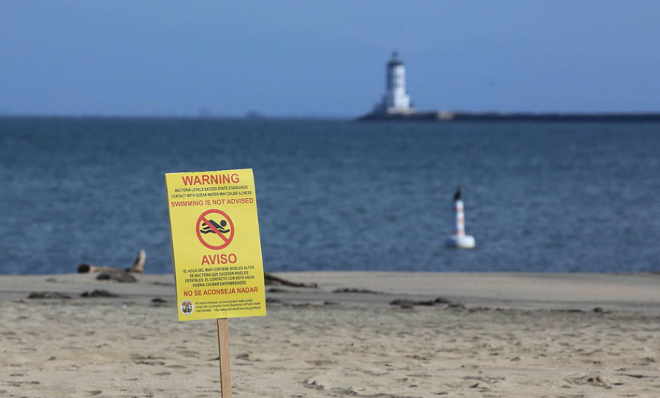 Courtesy Photo / Environment Texas
Poop in the water? We'll take a pass. Thanks!
It gives us no joy to spoil anyone's holiday swimming excursion. However, if your plans for the long weekend include splashing around at the Texas Coast, be warned you may be wading into poop-infested waters.

In 2021, 55 out of 61 Texas beaches tested by environmental regulators were found potentially unsafe for swimming on at least one day that year, according to Safe for Swimming?, an annual report issued by Environment Texas Research and Policy Center.

To make its determination, the group checked whether fecal indicator bacteria levels exceeded the Environmental Protection Agency’s most-protective “Beach Action Value,” which is associated with an estimated illness rate of 32 out of every 1,000 swimmers. While we assume you already know this, here's a quick 6th grade science review just in case: "fecal" equals "doo doo." Got it?

“Even as Texans are trying to escape record heat at the beach this Fourth of July, pollution is still plaguing too many of the places where we swim," Environment Texas Clean Water and Air Advocate Michal Lewis said in an emailed statement. "Now is the time to fix our water infrastructure and stop the flow of pathogens to our beaches.”

The worst performing beach, Ropes Park in Corpus Christi, had bacteria levels above the EPA safety threshold on 70% of days during which testing took place last year, according to the report. The news was also shitty for other popular coastal spots including Cole Park (67.61%), Emerald Beach (57.29%) and Port Aransas (46.64%). 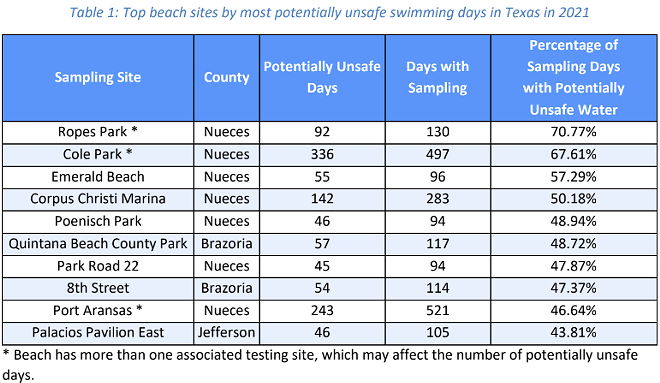 Pathogens that show up at Texas beaches are most likely to get there from polluted runoff and sewage overflows, according to the report. Whatever the source, they pose health risks. Scientists estimate 57 million people are sickened annually in the U.S. from taking a dip in caca-infested oceans, lakes and other waterways.

Based on its findings, Environment Texas recommends governments make major investments to prevent sewage overflows and runoff pollution. Its report drops as the feds appropriate $55 billion from the Infrastructure Investment and Jobs Act to the EPA to improve drinking water and wastewater infrastructure.