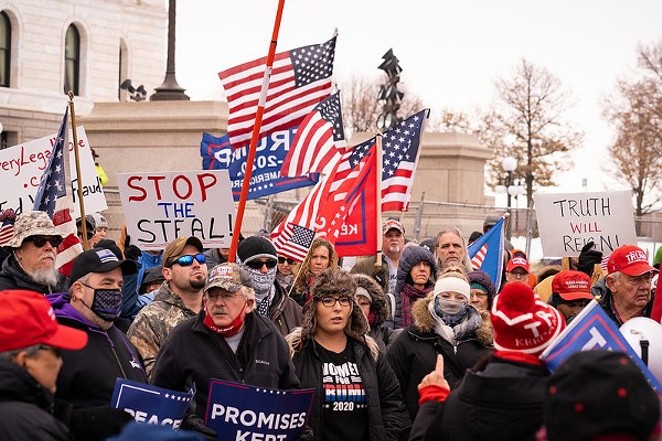 Chad Davis/FlickrCC
The year was 2017, and the new president wasn’t happy. Though Donald Trump had just won the Electoral College — originally invented to protect slaveholders, quite fittingly – he’d been pummeled in the hearts of America, losing the popular vote by 3 million. To the loathed Hillary Clinton, no less.

For a man of his insecurities, it had to be painful. So Trump tried to save face by claiming that 3 to 5 million people voted illegally. Numbers that conveniently assured he was liked the most.

His evidence was somewhat lacking. As in he offered not a shred. In fact, study after study had shown voter fraud as statistically comparable to winning the lottery. Trump’s thesis also ran headlong into common sense.

America never had a problem with people clamoring to vote. On the contrary. Even in the last election, in which Joe Biden set a record tally, only 62% of eligible voters cast ballots. Nearly half the country thought it wasn’t worth their time.

Then there’s the matter of the grand conspiracy needed to fabricate 3 million votes. You can’t do this alone in your basement. It requires lots and lots of henchmen to assemble all those plausible identities. To fill out all those ballots. To salt them county by county in handfuls at a time so as not to alert the guardians.

This would require a feat unheard of to any living American: Everyone keeping their mouths shut. No one could jump on TikTok to announce, “Hey everybody! We’re here at Chad’s house eating ‘za and rigging the election! Stop by if you want to party!” No one could claim their 15 minutes of fame by outing Chad on The View.

Yet the hard-charging men of the Trump administration would prove what all those cops, prosecutors, election judges and researchers had not. The president launched the Commission on Election Integrity to investigate, with Mike Pence commanding the full weight of the federal government.

The real driving force was member Kris Kobach, Kansas’ secretary of state. Four years previous, he’d pushed through a law forcing Kansans to supply proof of citizenship to register. The idea was to stop illegal immigrants from overrunning our democracy.

Though a judge would later slap down the law, noting “the court finds no credible evidence” any of this was happening, Kobach would now have the resources to prove his case.

It didn’t go well. The Commission demanded that states hand over data for every voter — addresses, birth dates, Social Security numbers, party affiliation, and felon status. Even the reddest of the red refused. As Mississippi Secretary of State Delbert Hosemann said at the time, “Go jump in the Gulf of Mexico and Mississippi is a great State to launch from."

Red states had already spent years probing this exact claim, using the specter of fraud to clamp down on early voting, absentee ballots, drop boxes and the like. They too had come up empty. Besides, these new Trump men didn’t seem the most competent sort. Even Republicans balked at the risk a data breach for a goose chase.

The Commission investigated for 11 months, only to peter out without fanfare. In drafts of its final report, the section on evidence was “glaringly empty,” said member Matthew Dunlap, Maine’s secretary of state. “There’s no real evidence of it anywhere.” To keep this sad conclusion quiet, the Commission issued no report at all.

Nonetheless, Kobach pretended he’d revealed alarming truths. “For some people, no matter how many cases of voter fraud you show them, there will never be enough for them to admit that there’s a problem,” he said at the time.

Consider all this as Trump once again beats the drum of conspiracy. Two weeks after the election, he’s still provided no evidence. His own U.S. attorneys say there’s zero sign of malfeasance. His own lawyers admit as much in court. And his election experts call it the safest vote in history.

But if you just repeat something often enough, that’s just as good as evidence. On Saturday, tens of thousands of people gathered for the “Stop the Steal” rally in Washington, protesting Biden’s theft of the election.

Like their hero, the Trump faithful can’t believe America has turned against them. Surely there was fraud. And they’d be happy to prove it. If only someone would investigate.

This article originally appeared in the Cleveland Scene, an affiliated publication.