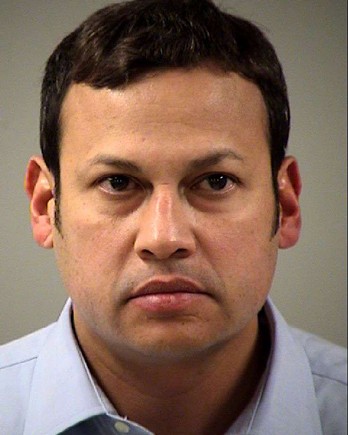 BCSO
Mark Benavides was first arrested in November 2015
San Antonio defense attorney Mark Benavides was running for a local judge's seat in 2015 when he was arrested and charged with coercing women to have sex with him as "payment" for his legal services.

Since then, the case has snowballed into nearly three dozen criminal charges, which include having sex with a minor, inducing a child under 18, to have sex, compelling prostitution of at least nine legal clients and possession of child pornography. Ahead of his April 3 trial date, lawyers for Benavides went into court Thursday to try to suppress a video showing his police interrogation after his arrest.

According to mySA, here's how Benavides addressed the whole sex-for-services part of the case against him:


“I don’t understand the connection between having sex with your clients and the charge of compelling prostitution. I hear of attorneys having sex with their clients all the time. I’ve never heard of them getting in trouble.”

In arrest warrant affidavits filed in the case, Benavides' first accuser to come forward was a 21-year-old sex worker who claimed the attorney offered her more money if he could film them having sex at the River Inn Motel. He also handed her his card and told her to call him if she ever needed any legal help.

Which she did, and so after that first encounter, the two wound up having sex in Benavides' law office, his car, his father's office and even a conference room at the Bexar County courthouse, according to an arrest affidavit.

Another of Benavides' former clients was a defendant in a criminal case who told investigators she only had sex with him because she thought he was friends with the judge on her case. Another former client told police she never paid Benavides to represent her in her two criminal cases, but rather met him at a motel to make "payments" every Tuesday. If you believe what Benavides told police, apparently such attorney-client arrangements are not uncommon in Bexar County.

“All of the victims recounted that they felt they had no choice in the matter and that if they did not perform the sexual acts in the manner that Benavides required, they would go back to jail or he would not give them proper legal representation,” the Bexar County District Attorney's Office said in a statement at the time of Benavides' arrest.

Benavides, meanwhile, has insisted the charges stem from a former client who was unhappy about the outcome in her criminal case and is now "making up a bunch of lies about me."

On Thursday, the judge on the case denied a motion by Benavides' attorneys to block the video of his police interrogation from being played at next month's trial. As mySA reports, the video appears to show Benavides telling someone* to destroy a DVD while investigators searched his house. Court records state that police found a disc labeled "137 of 276" that contained images of a minor engaging in sex acts.

On the police video, Benavides can be heard telling his someone: "You know what I’m talking about, the one I told you to destroy ... This pretty much will cancel my political career ... I could lose my law license over this," he says.

Later in the video, officers ask Benavides to remove his shirt so they could identify something his former clients recalled seeing: a large "scales of justice" image tattooed across his back.

—
*Correction 3/26/17: Further reporting has since clarified who Benavides was speaking to over the phone. It was not his wife, as originally reported. The Current regrets the error.