A Venezuelan migrant allegedly identified Perla Huerta as the mystery woman who lured migrants onto the flights, the New York Times reports. 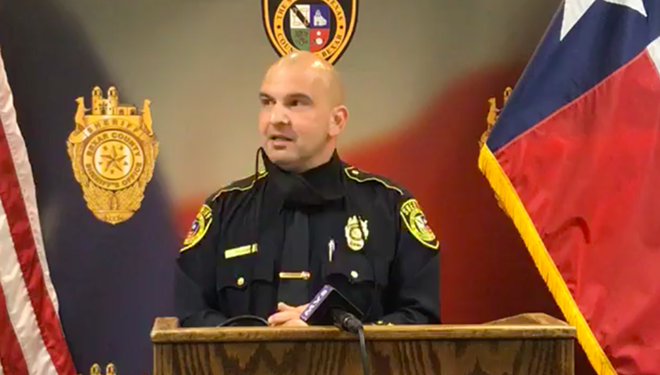 Citing law enforcement sources, the paper reports that the Bexar County Sheriff's Office is looking into whether Perla H. Huerta ,43, a former Army combat medic who also worked in counterintelligence, is the woman who lured asylum seekers in San Antonio onto the planes.

Migrants told news organizations that a woman named "Perla" recruited border crossers who ended up in San Antonio, even saying she paid one migrant to help her find people to take the journey.

Stories about the mystery woman led the League of United Latin American Citizens to offer a $5,000 cash reward to anyone with information leading to her identity.

On Sunday, the New York Times reported that a Venezuelan migrant who worked with the mystery woman identified her as Perla Huerta.

Huerta was born and raised on San Antonio's South Side before joining the military as a medic and relocating to Fayetteville, North Carolina, the Express-News reports. The former solider also served two tours in Iraq and four in Afghanistan between 2003 and 2019, according to the paper.

In 2018, Huerta moved into a condo in Tampa, Florida, near MacDill Air Force Base, home of U.S. Central Command. Huerta's condo was recently relisted for sale at a reduced price after a cash offer fell through the same week as the Martha's Vineyard migrant flights, the Express-News reports.

Huerta left the military in August, the paper also reported.

Bexar County Sheriff Javier Salazar launched an investigation into the flights on Sept. 19, saying the migrants were likely lured onto the plane under "false pretenses."

DeSantis responded to Salazar's announcement during a Fox News interview, saying that the migrants signed consent forms in both English and Spanish and willingly boarded the flights. However, lawyers in Massachusetts representing those on the planes pushed back at that claim, arguing that the brochure and paperwork given to migrants were deceptive.