Tavern in the green 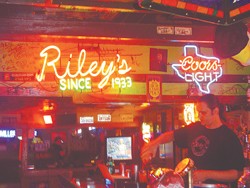 
Exiting I-35 North and pulling on to the isolated stretch of road known as FM 1102, it’s rather refreshing to leave the traffic-produced illumination behind in favor of some trees, quiet, and natural light — even if this particular setting bears a striking similarity to a hoard of poorly produced slasher flicks from the past two decades. Thankfully, Riley’s Tavern is only a mile off 35, so Friday the 13th flashbacks are brief.

Riley’s, which bills itself as “Texas’ first tavern after prohibition,” is the quintessential Texas watering hole — a mashup of live music, cigarette smoke, Lone Star, and a single onsite employee who is more than happy conversing — and drinking — with tavern patrons. Think of Riley’s as sort of a Southern Cheers, with Cliff Clavin in a cowboy hat and Frasier Crane as a 50-something burnout who loves nothing more than discussing the merits of old Jesse Ed Davis recordings.

Of course, in Riley’s case, such characters create an ambience all too unfamiliar in other Lone Star bars. Bikers, hippies, cowboys, college students, and in my case, 20-somethings who have grown tired of frequenting “cool” establishments — Riley’s houses us all. We’re treated to live music — on the Current’s recent trip to the bar, Eric Hisaw performed a stripped-down acoustic show — six nights a week (including Sunday’s open-mic night), while Mondays are reserved for the jukebox, free pool, and conversation on the bar’s spacious back patio.

As for what brings people to bars like Riley’s — namely, the booze — popular beer brands like Shiner and Dos Equis can be had for less than $3, and the bar (which features daily drink specials) is also stocked with a variety of liquor (try the strong but tasty rum and coke). Riley’s doesn’t feature a kitchen, though chips, candy, and beef jerky are for sale, and the multiple television sets are typically tuned to popular sports like football, baseball, or one recent evening, women’s Olympic beach volleyball.

Sure, Riley’s is quite the trek from the Alamo City, and yes, the isolated, tree-infested, mile-long drive on FM 1102 is straight out of a Jason Voorhees picture. Even so, the end result is well worth the trouble.