Send a News Tip
Texas State University is again in the middle of race-infused tension, this time for an opinion column published in the campus newspaper. On November 28, the University Star, Texas State's school paper, published an editorial titled, "Your DNA is an abomination," one which called for the death of "whiteness."

Surprising to no one, the column, written by junior Rudy Martinez, received criticism from readers, many of whom thought the ideas expressed were racist. 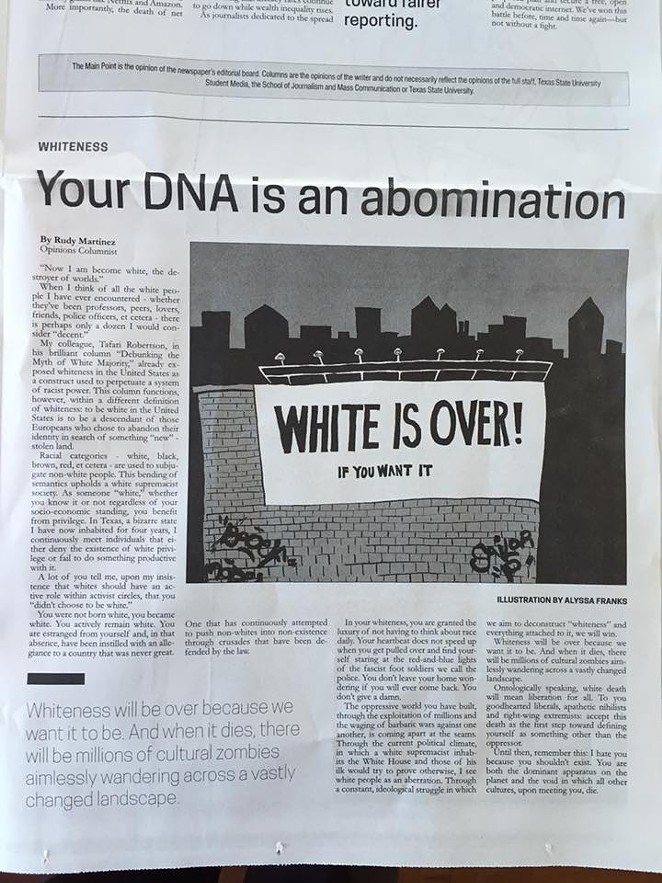 Andrew Homann / Facebook
"While our publication does no endorse every opinion put forth by student columnists or guest contributors, as the editor I take responsibility for what is printed on our pages," wrote Denise Cervantes, editor of the Star, in a statement. "The original intent of the column was to comment on the idea of race and racial identities... We apologize and hope that we can move forward to a place of productive dialogue on ways to bring our community together."

"The column's central theme was abhorrent and is contrary to the core values of inclusion and unity that our Bobcat students, faculty and staff hold dear," Trauth wrote. "While I appreciate that the Star is a forum for students to freely express their opinions, I expect student editors to exercise good judgement in determining the content that they print."

Despite all the backlash, some students (and non-students who learned about the column on social media) argued the editorial wasn't racist.

Martinez's column comes after a year's worth of race-baiting fliers have been posted around campus. A call for a vigilante squad to torture those promoting diversity went up just days after Donald Trump became president-elect in November 2016. Last December, fliers urging students to report undocumented students were posted in the school's student center. Another round of fliers in February 2017 encouraged white men to take back the country their ancestors died for (like slaves weren't forced to fight). Anti-semitic fliers, adorned with black swastikas, were posted in March. Most recently (as far as we know), flyers promoting white supremacy and using the "blood and soil" phrase used by German Nazis were posted around campus in late October.