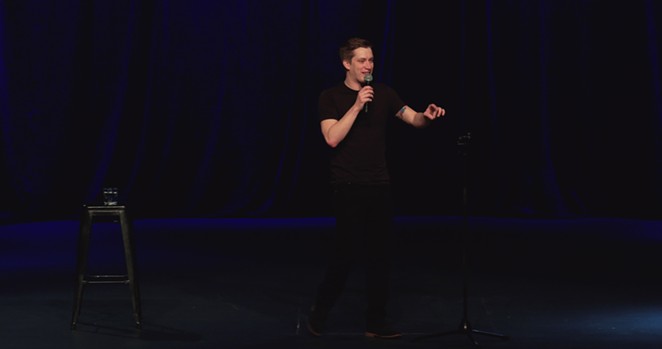 Netflix
Daniel Sloss will perform his new special Hubris at the Aztec Theatre Wednesday.
Name some of the reasons nearly half of U.S. marriages end in divorce. Adultery. Abuse. Irreconcilable differences. Imagine receiving divorce papers where the section listing the grounds includes the name of a standup comedian.

Scottish comic Daniel Sloss has seen it firsthand. No, he hasn’t been divorced himself, but he maintains that he’s taken the blame for ending approximately 300 marriages, 350 engagements and more than 120,000 relationships over the past three years. That estimate is based on the number of Twitter messages Sloss said he’s received since releasing his 2018 Netflix comedy special Daniel Sloss: Jigsaw, which many now refer to as The Break-Up Show. The claim is that when couples watch Jigsaw together, many are triggered to end their relationship.

“I’ve seen divorce papers that have cited my name,” Sloss, 31, told the Current during a recent interview. “I didn’t write the show to break people up. I fucking wrote it because I came out of my own shitty relationship, and I needed to vent and cleanse myself. It turned out that all that anger resonated with a lot of fucking people.”

Sloss is making his first trip to San Antonio on Wednesday, Nov. 17 to perform his new show Daniel Sloss: Hubris at the Aztec Theatre. He also recently released a new book, Everyone You Hate Is Going to Die, And Other Comforting Thoughts on Family, Friends, Sex, Love and More Things That Ruin Your Life.

Can you pinpoint the reason you think so many people have broken up after watching Jigsaw?

Because they don’t want to spend the rest of their lives in a miserable fucking relationship. I didn’t cause any breakups. What I did was give everyone in a bad relationship a kick in the ass. When you get out of a bad relationship, it’s one of the most amazing feelings in the world. When you do comedy that causes someone to break up, in their head, you’re like this guru. But I’m really just a stoner alcoholic from Scotland.

Do you wear it like a badge of honor?

I mean, again, I’ve never caused a happy couple to breakup. It wasn’t like two 75-year-olds who have been married for 50 years holding hands and having tea on the couch and then they watch my special and are like, “Oh my, God. It’s over.”

What was it like performing that specific show live?

When I was doing it onstage, I could see couples getting very uncomfortable. Their body language would change. They would come inside holding hands, and then I would see them pull away from each other during the show. I would think, “That’s going to be a fucking awkward car ride home for both of them.” I enjoyed it immensely. Whenever anyone tells me they got out of a relationship because of [Jigsaw], the first thing I always ask is, “Are you better for it?” I’ve never had someone tell me no.

You travel all around the world doing standup. Is it a challenge making jokes translate across different countries and cultures?

Generally, no. We all want to laugh. We’re all human beings with deep flaws. It’s all very relatable. I basically talk about what a fucking asshole I am and the things I hate, and people are like, “Yeah, we agree.”

When you perform in America, do you think the audience’s sense of humor has changed over the past few years? Is it easier to offend people these days?

There’s 300 fucking million of you cunts. There’s no such thing as an American sense of humor. You hear all these fucking rumors about cancel culture. I don’t buy into that. You can say whatever the fuck you want about anything. People are allowed to think your opinion is shit. But being upset about comedy is the most narcissistic thing in the world. It’s like you walk into a room and sit in front of a comedian who has never met you and think they wrote a joke just to piss you off.

Could that be an example of why it seems like you hate people in general?

I get mad at people, but I get way angrier onstage and in my head than I am in real life. If you’re rude to me in public, I won’t yell back. I’ll just fucking internalize it and go home and deeply wish bad things happen to your family. But at least I won’t say it to your face.

In your book, for legal purposes, you changed the name of one of your ex-girlfriends to “Scarlett Johansson.” Do you hope Scarlett and her boyfriend Colin Jost stream Jigsaw soon?

(Laughs.) There’s lawyers that weigh up the likelihood that a celebrity will sue you. So, we had really deep conversations about what would happen if Scarlett Johansson read the book. Would she be mad? Am I that hideous that she would take that as an insult? Is it going to damage her reputation? We all agreed that we thought she would be fine with it. But she can still turn on a dime. She can be like, “That motherfucker is going down!”