ICYMI, Here's Tim Duncan and His Adorable Daughter, Quill, at the Spurs Game 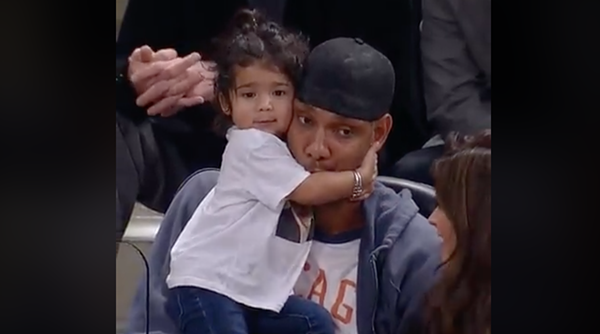 Facebook / San Antonio Spurs Memes
Tim Duncan has never been one to step into the spotlight, especially now that he's retired from the Spurs. On Wednesday, Duncan and his crew graced fans with his presence at the team's matchup against the Memphis Grizzlies.

While fans love sighting Duncan come out from the shadows of retirement, many will also be delighted to see the Spurs legend's daughter with girlfriend Vanessa Macias.

San Antonians haven't seen much of Quill, who was born in March 2017 and made her courtside debut last October.

Her rare appearance on Wednesday is made even more special by the fact that she's wearing a t-shirt with Gregg Popovich's face on it.
Fans first speculated that Macias was pregnant after spotting a baby bump at Duncan's jersey retirement ceremony in December 2016. The GOAT confirmed his daughter's birth while recording an episode of a podcast and even opened up about the meaning behind Quill's name. A major comic book fan, he paid tribute to Peter Quill, better known as Star Lord, of Marvel Comics’ Guardians of the Galaxy, but made sure the name had a special meaning for Macias as well.

“My girlfriend, she also writes a lot too, so it’s like a pen quill,” Duncan said in the interview. “It’s a combination of all the things.”