The exhibition is on view at Trinity's Neidorff Art Gallery through Oct. 15. An Illinois native who earned an MFA from the University of Texas at San Antonio and now teaches art at Palo Alto College, Mahaffy has been exhibiting locally since the mid-'90s and has shown at Artpace, Blue Star Contemporary, the McNay Art Museum, Sala Diaz and the San Antonio Museum of Art. 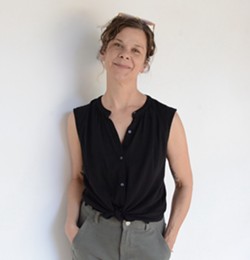 Arguably one of her most recognizable works due to its permanent location in Hemisfair's Yanaguana Garden, a laser-cut steel shade structure PLAYhouse explores concepts that continue to influence her work — memory, place and moving shadows — while also referencing the historic neighborhood all but erased for the 1968 World's Fair. It's simultaneously playful and poignant and like much great art only gets better the more you know about it.

Mahaffy's new body of work "Objects of Absence," on view at Trinity's Neidorff Art Gallery through Saturday, Oct. 15, began percolating back in 2019 when she was invited to be the pilot artist in a summer residency program in the university's Department of Art & Art History. Although the pandemic caused a two-year delay in the timeline, Mahaffy waited it out and started the residency this past June.

"There were so many things that I knew that I wanted to explore while I was here," Mahaffy told the Current during a recent gallery visit. "It had been a really long time since I'd had a gallery to myself — a large space where I could do something more installation-based. So, I hung on to it. ... I was almost protecting it."

As Mahaffy explains it, having access to the university's facilities — especially while students were on summer break — gave her "locked in a museum" vibes. Making the most of the situation, she worked in the digital lab and the sculpture and printmaking studios to create components for "Objects of Absence." Organized into distinct zones, the body of work sews an array of seemingly disparate threads — from the stories and secrets held by personal objects to Victorian-era polar expeditions — into a cohesive yet decidedly mysterious exhibition. Although the zones in "Objects of Absence" can be approached in any order, the first that viewers will encounter is a domestic-looking space that explores the passage of time. At first glance, one of the objects in the room might suggest an antique relic but is in fact a wooden hand mirror Mahaffy created from reclaimed longleaf pine using both hand-carving techniques and CNC technology. Obscuring its reflection, she sandblasted the glass with a map of Antarctica's Eagle Island, which experienced unpredicted large-scale snowmelt during a heatwave in February of 2020.

"A very simple read is that it's about aging and loss — looking at these sorts of unforeseen events and your own sense of identity," Mahaffy said of the piece.

Just beyond the mirror lies a wall-sized installation rooted in floriography. Popularized in the Victorian era and now amusingly likened to "19th-century emojis," the practice involved creating symbolic bouquets based on the language of flowers.

"Some of them could be downright catty," Mahaffy said. "If you were jilted, you could take revenge by merely putting an arrangement together."

Nodding to the hallmarks of floriography as well as our "collective experience of illness and loss" amid the COVID era, her installation places a grid of 12 ghostlike images of flowers — all found in a digital archive — atop wallpaper featuring hand-drawn bouquets that progress from fresh to withered as they repeat up the wall.

"There's something about the wilted flower that is both sad and beautiful at the same time," Mahaffy mused.

Curious gallery-goers can find the names of the depicted flowers and then try to decipher the bouquet's meaning with the help of a handy floriography book at the reception desk. "I have always had a fascination with journeys into the unknown — in particular mountaineering and polar exploration," Mahaffy said. "Expeditions into realms like the sea or extreme environments require meticulous planning and a focus of vision but can also be full of hubris and ego — which then often fails. When it doesn't, we call it heroic. In the remains of ill-fated expeditions like those of the Franklin Expedition, we are often only left with artifacts to reveal a story."

Referencing personal effects recovered from that 1845 expedition, Mahaffy created brass spoons, forks and combs using a jeweler's saw. While all of these pose their own mysterious questions — the forks are Frankensteined together and the spoons are etched with maps — the combs best divulge the underlying narrative since they're presented like specimens in a cedar box lined with sand.

Other objects amid the Raging Sea zone are inherited pieces that Mahaffy manipulated to great effect. An antique coffee urn outfitted with an LED is perforated with the navigational constellations Cassiopeia and Polaris, allowing it to cast tiny stars on the wall. She also grew crystals on a silver-plated sugar bowl and creamer, and on an upholstered chair that's attached to the wall in a skewed position, suggesting the distress of SOS. Easily the largest piece in the show, Mahaffy's Arctic Dreams (Land is the Measure of Time) anchors the gallery's central zone. Comprised of an impossibly long white curtain hung from a brass curtain rod — both handcrafted — Arctic Dreams is a dramatic example of Mahaffy's mastery with recontextualizing ordinary objects.

Propped up on the wall and rippling across the floor, the piece transcends notions of domesticity, instead suggesting a frozen landscape. Like her spoons, forks and combs, it too references recovered Franklin Expedition artifacts, which oddly include two brass curtain rods.

"I just like that notion of this thing in the middle of an environment or a landscape where it just has no business or use or purpose," Mahaffy said. "There's a lot of ideas and conjecture about why — why did they grab this? What does it say about the people who brought it? ... I wanted to relate that to the idea of personal objects, domestic objects, things that are left behind in chaos — maybe after we're gone."

Hanging on a nearby wall, another of Mahaffy's mirrors reflects the icy allusions with an etched composite illustrating the melting retreat of Alaska's Columbia Glacier.

Functioning as something of a closing statement in the gallery's far corner, a suite of snowy white prints blind-embossed with personal effects — gloves, keys, a wallet, a comb — lie in a shiny white display case. The effect evokes blocks of ice.

"I wanted them to live horizontally and not be framed as images," Mahaffy said of the prints. "So there's a bit of push and pull between object versus image. You're looking at an impression — the object that was once there — and you could almost read them as things being uncovered or unburied in the snow."