SAY Sí’s board offered to recognize a union consisting of 12 employees, which represents less than half its total labor force. 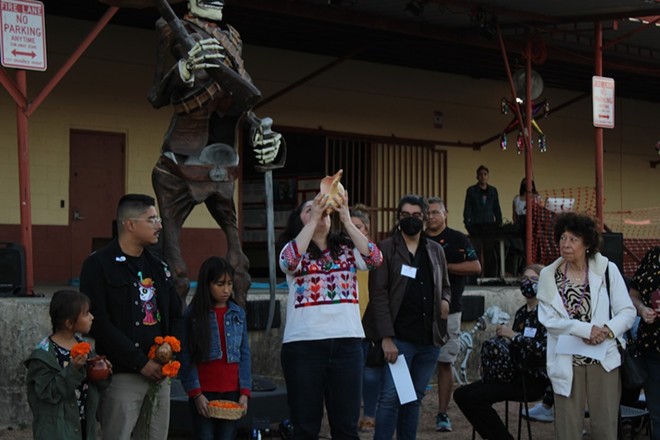 Facebook / SAY Sí
Attendees watch a demonstration at SAY Sí's recent Dia de los Muertitos event.
The bid by employees at San Antonio-based SAY Sí’s to seek a union election has stalled after the arts nonprofit contested the makeup of the workplace’s bargaining unit with the National Labor Relations Board.

In a Nov. 1 NLRB Zoom hearing open to the public, SAY Sí’s employer counsel, Darlene Haas Awada of law firm Ogletree Deacon, argued that directors at the organization shouldn't be included in the bargaining unit since they represent managerial positions.

Her arguments came on the first day of ongoing testimony from witnesses and counsel at the nonprofit, which offers arts and development programs for local youth. Such hearings are standard when an employer contests an employee bargaining unit.

The nonprofit only agreed to recognize 12 employees in a possible union, according to Ramirez. That represents well under half of Say Sí's total labor force of 29.

Hass Awada didn't respond to the Current’s request for comment by press time.

Jacob Aronowitz of Austin-based United Professional Organizers' business committee is acting as SAY Sí’s employee representation. During the Nov. 1 hearing, he argued that directors don’t have traditional managerial roles at the nonprofit.

“Because [directors] have to run almost every significant decision by true supervisors — like the executive director — they don’t exercise independent judgment,” Aronowitz said. “And because it is an artistic and collaborative environment, more decisions are horizontal.”

Ramirez echoed Aronowitz’s sentiment in comments to the Current, arguing that SAY Sí’s lawyers are mischaracterizing the directors' responsibilities.

“Our directors don’t have firing and hiring power or perform scheduling duties," he explained.

According to Ramirez and other employees active in the union push, four SAY Sí board members — Mae Escobar, Andres Gonzalez, Melanie Mendez Gonzalez and Eve Hernandez — stepped down after employees filed their original petition for voluntary union recognition in September.

In a press release, SAY Sí said it offered to voluntarily recognize only certain workers seeking to unionize. It also emphasized that it continues to supports its staff.

“With many uninformed accusations spreading across social media, it's important that we stay focused on the legal and fair approach for our employees driven by the NLRB,” SAY Sí Board President Jason Moran said in the release.

Aronowitz said the NLRB hearings will continue indefinitely until all witnesses have been heard.