The Wicked Stage on Tragedy, A Tragedy 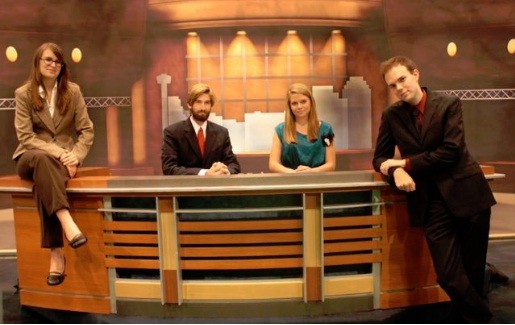 I’ve been thinking a lot about tragedy lately; partly, that’s because we—all of us—have just experienced the anniversary of 9/11, and it’s hard to separate that date, and those events, from the notion of tragedy, writ large. Partly, it’s because I’m considering the creation of an entire course on tragedy at Trinity: I already teach a combined Greek and Roman Drama course—in which tragedy naturally looms large—but to go from fart jokes in Aristophanes to infanticide in Seneca has always produced a bit of whiplash. (My students, to their credit, bravely soldier on.)

But, mostly, I’ve been pondering tragedy since I’m indirectly responsible for the show that’s going up at Trinity this weekend: Will Eno’s laconically-entitled Tragedy: A Tragedy. I first read the play a few years ago while burrowing my way through a number of modern tragedies, including Edward Albee’s wickedly subversive The Goat, which the author significantly subtitled “Notes towards a definition of tragedy.” (Trag-odos literally means ‘goat song’ in Greek, in commemoration of a sacrificed kid; and, to be frank, things look very bad for the goat in The Goat.)  I didn’t actually see an animal slaughtered on stage (only mimetically, thanks) until Peter Sinn Nachtrieb’s wonderful Hunter Gatherers (at the Hyde Park Theater in Austin): when dinner is preceded by the ritual dismemberment of a lamb, more than just comedy is on the table.

But Eno’s Tragedy: A Tragedy is another animal (so to speak) altogether. It’s less an investigation into ancient notions of communal taboo than a meditation on contemporary media: how we live, die, and grieve together as a news cycle. More importantly, it turns classical tragedy inside out: the “hero” of Tragedy: A Tragedy is, um, tragedy, one endlessly reported, analyzed, and lamented by reporters, anchors, and talking heads—but never really identified, never personalized. It’s thus not a play about tragedy writ large, but broadcast large: Eno is interested in how we, as Americans, react so intimately to the most ridiculously impersonal of media, including cable and radio, with their endless loops of prefabricated, tragic rhetoric. Modern tragedy, Eno argues, is now its own weekly television show. As an absurdist piece of theater, Tragedy: A Tragedy is sometimes advertised as a humorous lark—you can hear gales of laughter on the Berkeley Rep’s trailer here—but it’s certainly not Tragedy: A Comedy. It’s a serious inquiry, by a serious artist, into how we cope with devastation in a world that’s both post-9/11 and pre-Google+.

So: last year I passed off my copy of Tragedy: A Tragedy to my Trinity colleague Kyle Gillette; he thought it would be perfect to direct for the Trinity mainstage; and so, here we are, waiting for tragedy. I hasten to add that this present column is not a review; I haven’t even seen a dress rehearsal, so for all I know, the production is a total disaster and nobody will ever speak to me again.

But, somehow, I don’t think so: Eno has already been short-listed for the Pulitzer (albeit controversially, for Thom Pain, based on nothing) and his riff on Thornton Wilder, Middletown, has been making the regional rounds with success. After some conservative seasons, I’m glad that Trinity’s taking a chance on a new and enterprising playwright. After all, we can always have comedy tomorrow; why not Tragedy: A Tragedy tonight?