What will new life for Casa Maldonado mean? 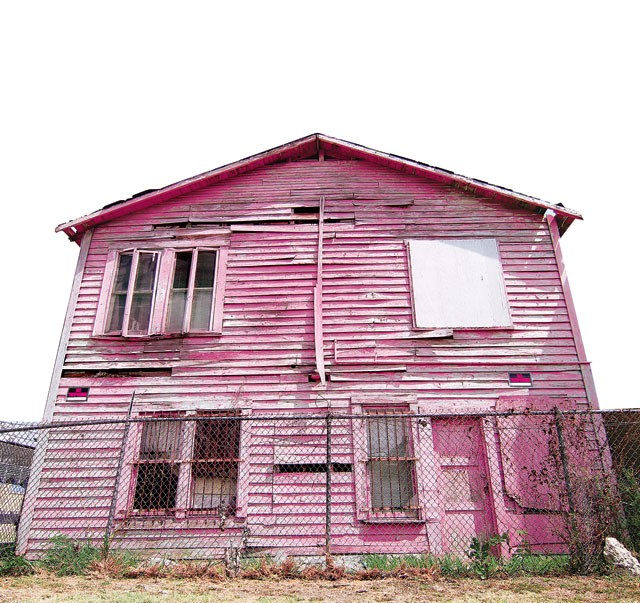 The Avenida Guadalupe Association contended the ramshackle pile known as the Pink Building or Casa Maldonado was in the way of their federally-funded Promesa Project, intended to bring attractive office space and workforce training to the Westside. Both the State and the City refused to list the building as an historic property. But last Thursday the City Council approved $550,000 to fund the rehabilitation of the structure at 1312 Guadalupe Street. A feasibility study completed in late November estimated that $650,000 will be necessary to save the structure, the center of a two-year-long struggle between preservationists rallied by the Esperanza Peace & Justice Center and property owner Avenida. The agreement between the City and Avenida makes the property owner responsible for all additional expenses not covered by City money. The eleventh-hour decision clears the way for the Promesa Project to proceed, albeit as mixed old and new building. But will saving the Pink Building — a hub of political and community activity in the 1920s and '30s — galvanize Westside preservationists, or conclude the struggle that became a cause after the La Gloria dance hall was demolished in 2002? What do you think? Tell us.

On another front, the long-held desire to add a museum dedicated to American Latino history and culture to the Smithsonian Institution's facilities on the National Mall in D.C. has been given a boost. Actors and community leaders Eva Longoria and Emilio Estefan have agreed to lead the charge in a national campaign launched by the Friends of the National Museum of the American Latino in support of passage of the Smithsonian American Latino Museum Act (S.1868), bipartisan legislation introduced on November 15 in the Senate and House by Senator Bob Menendez (D-NJ), Senate Majority Leader Harry Reid (D-NV), U.S. Senator Marco Rubio (R-FL), U.S. Representative Xavier Becerra (D-CA) and U.S. Representative Ileana Ros-Lehtinen (R-FL). Florida Republicans and an assortment of Democrats are courting the Latino (and arts-supporting) vote with this measure. Hello, Texas? Oh, never mind. The State of the Arts seems to have gone missing.

But we could get some side benefit from the national campaign, right here in SA. Our two Smithsonian Affiliate museums, Institute of Texan Cultures and Museo Alameda, both need help. The Alameda is broke, and the ITC is still under threat of being nudged out of its building in HemisFair Park. Anyone believe in trickle-down PR?