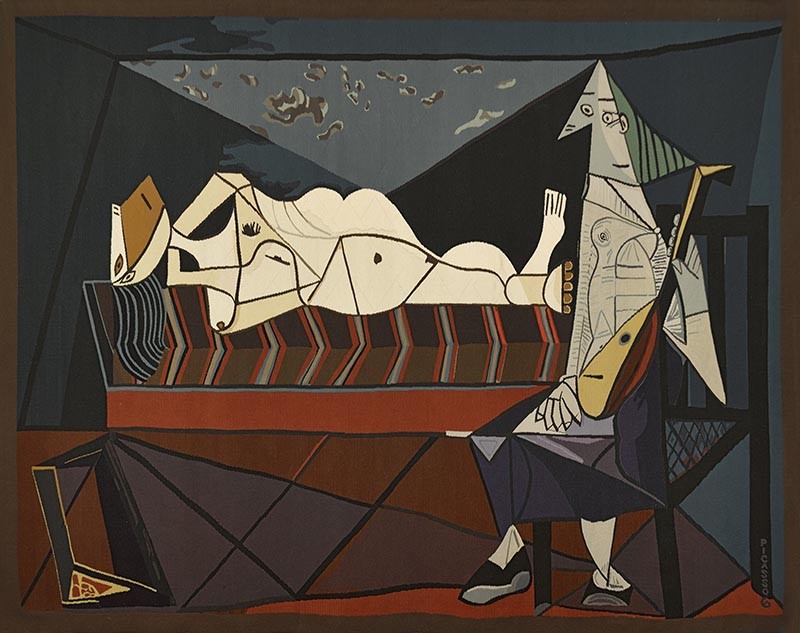 Imagine being able to ask Pablo Picasso, the most renowned artist of the 20th century, to help decorate your basement. For Nelson Rockefeller, it was more than a tycoonish whim. Between 1958 and 1975, he commissioned Picasso to create large-scale tapestries based on some of the Spanish-born artist's best-known paintings to hang in Kykuit, the Rockefeller family estate in Westchester County, New York. Providing a spectacular panorama of Picasso's greatest hits, 14 of the 18 tapestries are on view through March 8 at the San Antonio Museum of Art.

[Photos: 10 of Nelson Rockefeller’s Picasso Tapestries on Exhibit at the San Antonio Museum of Art]

SAMA, home of the Nelson A. Rockefeller Center for Latin American Art, has borrowed these masterpieces of weaving while Kykuit, now a property of the National Trust for Historic Preservation, is closed for the winter. This is the first time so many of the tapestries have been shown together outside of the estate, and the spacious, well-lit Cowden Gallery probably provides a better viewing experience than the cramped-looking, subterranean gallery devised by Rockefeller to house his sprawling collection of modern art.

If SAMA could have borrowed the original paintings, this truly would be a once-in-a-lifetime blockbuster, but it would have been immensely difficult to wrangle loans for so many icons of 20th-century art from New York's Museum of Modern Art, London's Tate Gallery, the Peggy Guggenheim Collection in Venice, and the Centre Georges Pompidou and Picasso Museum in Paris. However, the tapestries reflect Rockefeller's philosophy that art should be made accessible to everyone.

Rockefeller became interested in modern tapestries in 1955 when he acquired the one Picasso had created based on his famous anti-war painting, Guernica. The country's most prominent proponent of popularizing art, Rockefeller felt that if he could transform Picasso's key works into tapestries, they would be easier to tour, exposing a broader audience to one of the world's most important artists. Tapestries are more durable than paintings and can be rolled up for easy shipment. The Guernica tapestry, which now hangs in the United Nations building in New York, was displayed at SAMA in 2012 and inspired this exhibit.

Four of the best tapestries are based on paintings from MOMA's collection, including the Three Musicians, a landmark of Picasso's synthetic cubist phase. Alfred H. Barr Jr., MOMA's founding director, recommended the painting because its flat planes of color translated easily into weaving. He also recommended the Harlequin, Picasso's alter ego, and The Studio, a fairly simple geometric composition that includes a stylized Picasso standing at his easel holding a paintbrush and gazing at his model, his beloved muse Marie-Thérèse Walter, represented by an abstract white plaster bust.

But Barr was dubious about the choice of Night Fishing at Antibes, a complex painting in hues of blues, purples and greens. During late-night walks, Picasso observed night fishermen attracting their catch with acetylene lamps. With a cubist fisherman holding a trident with four arrows pointed down at the fish and stars reflected in the dark water, Night Fishing at Antibes is the most dramatic tapestry in the exhibit, but it's also the most confounding and chaotic.

Three of the tapestries are based on paintings from Rockefeller's own collection. Interior with a Girl Drawing shows Walter at work on a sketchpad. Pitcher and Bowl of Fruit is distinctive for thick black outlines mimicking stained-glass windows. Girl with a Mandolin (Fanny Tellier) is the last tapestry that Rockefeller commissioned, but it's made of silk and is the earliest work of cubism in the show.

Along with the Rockefeller tapestries, SAMA is showing two large-scale tapestries that belong to Mexico City collectors Vicky and Marcos Micha. Both are variations of Picasso's interpretation of Édouard Manet's scandalous Luncheon on the Grass. But the largest was rejected by Rockefeller, perhaps because, as Uht speculates, there were "so many colors."

While the tapestries may not provide an exact match for the color schemes of Picasso's paintings, they are close enough for anyone who wants to know Picasso better but doesn't have the means to jet off to New York, London and Paris. More importantly, similar to Picasso's ceramics, these tapestries show weaving is an art form that shouldn't be dismissed as mere craft.