Sir-Wacha's Vietnamese Hits At The Block 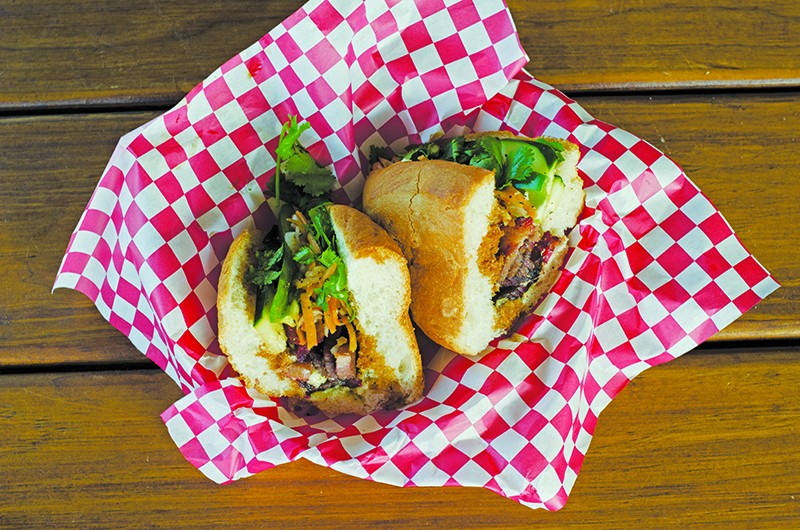 Food trucks may be commonplace in today's culinary landscape, but traditionally they have not draw the attention of food reviewers. Yet readers want to know where to chow down when it comes to meals on wheels in and around the city's food truck parks. The very essence of food trucks — even the more established ones — means that, well, shit happens, and you might not find them at their usual spot so tracking them down for review can be problematic.

Having previously sampled one of Sir-Wacha's banh mis when it originally opened at The Block left me with hope that the truck could chug along enough for me to come back. It could be considered kismet then, when its freestyle taco submission was one of the highlights of this year's Twisted Taco Truck Throwdown, which I judged. And for a pair of tacos to have left such an impression after sampling 30-plus iterations was an even better sign.

A visit to The Block was in order.

Much like the rest of the UTSA Main Campus, the area around it has seen a housing boom and with it a vast increase in food options.

The Block, owned by former grad Jon Onstead, is one of these additions. For almost two years, the manicured park — complete with seesaw Mustache Ride game — has hosted several high-caliber mobile eateries from the start. Regular trucks include the Colombian cart known as Gus' Empanadas (includes bench seating so you can get to know Gus), Chela's Tacos (I'll be damned if it doesn't have one of the best tacos in town with its nuanced cilantro chicken) and Crazy Carl's (sister eatery to Dignowity Meats).

Add Sir-Wacha to the mix.

Owned by Cody Pham, an Art Institute culinary alum, the truck has quickly become a favorite within the university's foodie set while also appealing to area neighborhoods. My first official stop included more of the kimchi tacos, this time enjoyed by a North Side-based coworker. Served on griddled corn tortillas, house-made kimchi and a heaping portion of lightly sweet, beef bulgogi, the tacos are tied together with red cabbage slaw and a heavy drizzle of spicy sriracha kewpie mayo. Aesthetically appealing and equally satiating, the tacos can easily veer into messy territory, but an order of two usually doesn't hang around that long.

The banh mi with roasted pork, cucumber spears, julienned carrots, jalapeño and cilantro was commended for its fresh filling, but the bread could have been less toasted. Another goopy helping of kewpie mayo helped set the banh mi apart. A visit to Sir-Wacha means you'll get an introduction to Vietnamese with an interesting twist.

As a follower of food trucks for the past four years, I can safely say most menus aren't very lengthy and tend to stick on the safe side (read: burgers, sandwiches and tacos) that will sell. These kitchens are compact, after all. In Sir-Wacha's case, two appetizers and three entrees make up the menu. It's easy enough to review, but also leaves this eater wanting a little more to sample, especially considering the truck's spring rolls. Tightly wrapped, crisp and packed with pork, carrots, cabbage green onion and vermicelli, the rolls were well seasoned and perfectly fried each time. The dumplings, also made using pork, were pan-fried resulting in a tasty crunch. Have them with or without the accompanying soy sauce blend; they really don't need any boost.

My last visit during the now-rare dry evening included more of the same consistently swell kimchi tacos and spring rolls. We opted for an order of the fried rice and I found my only quibble with Sir-Wacha. Though packed with green beans, corn, peas and tenderly cooked and sizable bites of pork, the fried rice was seasoned too freely with soy sauce in its wok. Perhaps the optional $1 fried egg, available for any entrée, would have helped soak up some of the added sodium.

Skinny: Vietnamese eats out of a big, red truck that keeps to the city's Northwest side.
Best Bets: Banh mi, egg rolls, kimchi tacos
Hours: Weeknights at The Block, but follow them on Facebook or Twitter for daily updates
Price $5-$9