Gubernatorial candidate Beto O’Rourke unleashed the expletive on a man who laughed about the Uvalde school massacre. 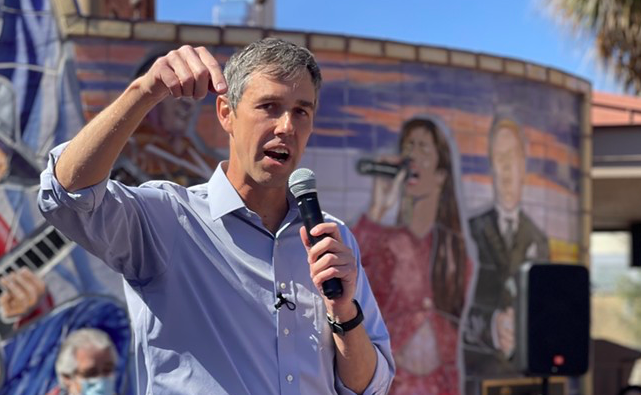 "It may be funny to you, motherfucker, but it's not funny to me," O'Rourke fired back when the man interrupted the former El Paso congressman as he spoke Wednesday about the massacre that took the lives of 19 children and two teachers.

Video of the confrontation shows the crowd, which includes numerous senior citizens, giving O'Rourke a standing ovation for the verbal beatdown.

O'Rourke, a Democrat, has made gun control a key part of his campaign to unseat Gov. Greg Abbott, a two-term Republican who refused to call a special session to address gun reform in the wake of the Uvalde shooting. Abbott, an outspoken NRA supporter, also signed a bill last year allowing virtually any Texas adult to publicly carry a firearm without training or a permit.

This is how you respond when someone laugs loudly while discussing the mass shooting in Uvalde.

“It may be funny to you mother f*cker, but it’s not funny to me.”
pic.twitter.com/KhKM7o42ZZ

The confrontation occurred during a visit to Mineral Wells as part of O'Rourke's 49-day tour of the state.

Roza Calderón, an attendee at the rally, told The Daily Beast a few groups of Abbott supporters appeared at the event, including a group of men who made "horribly racist or homophobic comments" and laughed during speakers to get a rise out of the crowd.

"When [O'Rourke] spoke about the Uvalde shooting, the men started heckling and laughing boisterously. It’s when Beto made the comment," Calderón said. "The men were visibly embarrassed, and one of them started yelling like he was going to teach Beto a lesson. Event staff tried to calm him down, but they couldn’t. A police officer was flagged over to help.”

Calderón told the Daily Beast that the Abbott supporters finally left five to 10 minutes after the exchange.

O'Rourke has dropped expletives on the campaign trail before, periodically peppering campaign appearances with words like "bullshit." The candidate even grabbed headlines after his narrow 2018 loss to U.S. Sen. Ted Cruz when he told supporters, "I'm so fucking proud of you guys."

However, given the volume of online shares of O'Rourke's latest f-bomb, it's clear this particular one touched nerves.

Fred Guttenberg, whose 14-year-old daughter Jaime was killed in Florida's Marjory Stoneman Douglas High School shooting, was among those who retweeted the video.

“This is how you respond when someone laughs loudly while discussing the mass shooting in Uvalde," he wrote.